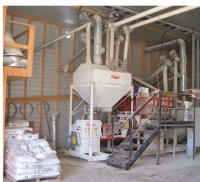 In planning a feed mill expansion, producers must first understand their reasons for expansion, Alan Bell of Superior Agri-Systems, Winnipeg, Man., told attendees at the Atlantic Poultry Research Institute’s feed mill workshop, held this past February at the Nova Scotia Agricultural College. He said an expansion can compensate for a shortage of farm labour or help the farmer meet new regulatory requirements for CQA and HACCP.

In modernizing a feed mill, Bell said that the producer must define his goals, identify problems in the system, then set priorities for dealing with them.

The receiving equipment could have insufficient capacity; a larger horsepower motor might be needed or a faster discharge system. The equipment could be outdated, or it could be upgraded but would it be economical to update, or should it be salvaged if it is in decent condition?

The producer will have to look at how he stores and processes feed ingredients, his scaling, mixing and pelleting, then how he distributes the processed feed to the bins.
After identifying the bottlenecks in his feed mill system, Bell said, the farmer can then draft a plan to make it function more smoothly. “You have to do the math. How much more production will occur?”

He said the questions that must be resolved are: “How much money will it save?… What will it cost?….How will we finance it? . . . Can the project be completed in phases?”

He also recommended, “Look at what will make the most money and do that part first which will help finance the rest of the expansion.”

In executing the plan, the farmer should also compare what was projected financially and what is actually happening in production, and adjust the plan as needed if it is not working as projected. Bell commented: “There are many ways to skin a cat.”

He also identified several new feed mills the poultry producer might want to consider before planning an expansion of their existing feed mill.

“Particle size reduction is probably one of the biggest things you will see in the next little while,“ he said.

He noted the multi-Zone hammermill (MZH), the roller/grinder mill, the disc mill and the variable-speed hammermill can change their speed to automatically reduce the particle size without changing a screen.

The MZH has five zones in its grinding chamber and uses plates rather than a screen, said Bell.  There is also less wear in this mill than a conventional hammermill; but it is only available from 75-horsepower and up.

The roller/grinder mill has two pairs of rollers rotating at different speeds with each roller having a different number of grooves.

Bell observed this mill has a higher processing capacity per hour than a hammermill, lower operating costs; but it also has a higher capital cost.

The basic roller mill costs about $18,000 and its maintenance costs will be much lower if the feed material is first cleaned and screened before grinding, said Bell, adding the roller/grinder mill works very well for poultry feed.

The disc mill works with two plates, one stationary and the second plate, which has a rough surface rotates, with the particle size determined by how closely the plates are put together, he said.

The variable-speed hammermill runs through a variable frequency drive with varying tip speeds to change the particle size.

There are new alternatives also to tote bags, which can be a real problem to handle and use, Bell said. The new poly hoop totes and steel hopper totes can be moved with a forklift and stacked on a pallet. The new totes can also be shut off, whereas the existing totes have to be emptied before they are removed.

Except for 12 to 16-hours per week, this farm’s mill runs unattended, with any one bin fed automatically, through computers and sensors, when it gets down to less than five tonnes of feed, he said, noting, a rotary blower distributes feed to the bins from the roller/grinders and hammermills.

Everything on this farm’s feed mill is controlled by computer from either house or the main barn, said Bell. “Other than unloading trucks and handling totes; they don’t have to do anything other than clean up. This farm could easily produce twice as much as it does.”