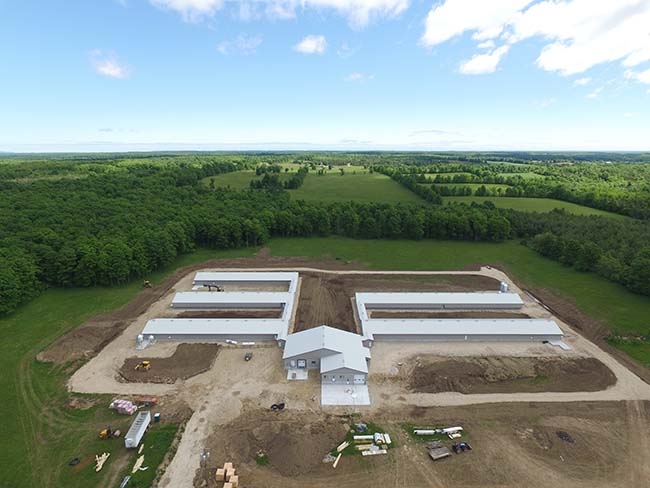 A drone shot showing construction of the new breeder facility between Berkeley and Markdale, Ont. shows its somewhat protected location and the unique layout of the facility. Photo courtesy of John Ernewein Ltd.

Hybrid Turkeys, a division of Hendrix Genetics, has built a new breeder facility between Berkeley and Markdale, Ont. The name of the farm, “Berkdale” is a mix of the two.

While construction of a new turkey breeder farm might not seem terribly newsworthy, this one is, firstly because of its location. The site was chosen at a significant distance from the company’s other operations in southern Ontario, mainly for biosecurity reasons.

“Five years ago we wouldn’t have even considered a location so far away from our other farms,” says Hybrid Turkeys’ farm division manager, Marek Mirda. “To ensure secure supply to our customers, especially during disease outbreaks and establishment of quarantine zones, we looked for an area with distance from our own and other poultry farms. During disease outbreaks there can be an impact on healthy farms due to restriction of movement within quarantine zones, so we want to minimize or eliminate this potential risk.”

Hybrid Turkeys began its search for a location by examining a Canadian Food Inspection Agency map of Ontario that pinpoints all types of livestock operations. “We evaluated this area on the map to choose a location with the least amount of poultry operations,” Mirda notes. “After working with real estate firms, we found this property between Berkeley and Markdale.”

New design
Location aside, Berkdale has other important biosecurity aspects, with the most significant being a farm design that connects the barns.

In the past, Hybrid Turkeys would have designed the farm so the egg house and lay barn (for example) were separate buildings, and staff would therefore have to change clothing and boots every time they would go between.

“A system of separate entry and exit not only adds risk of picking up outside organisms, but is also difficult during winter months in Canada,” Mirda explains. “The new system has staff go through biosecurity procedures once and then they have safe access to the entire barn system.” Hendrix Genetics is in the final stages of upgrading a layer breeder facility in Ontario that will have the same design, he adds.

In addition, Berkdale (and a Hybrid Turkeys pedigree facility as well) have a dry shower and other additional measures to keep foreign organisms as far away from the barn as possible – on both the brood/grow side as well as lay barn side. Upon arrival at the farm, staff and any visitors must enter the dry shower facility, which requires individuals to change out of street clothes into farm clothing and footwear. Next, individuals exit the dry shower into a neutral air pressure zone before accessing the completely enclosed wet shower rooms. After using the shower facilities, individuals change again into new farm clothing and boots, ready to enter the clean zone of the farm.

Outside the buildings, there is complete separation of the clean and dirty zones. Dirty zone roads are for external suppliers to deliver fuel and other supplies without entering the farm area. Clean zone roads are only for internal clean vehicles that transfer staff or supplies between barns. All the buildings’ mechanical equipment can be accessed from the dirty zone so that contracted service technicians have quick access in case of urgent need. Hybrid Turkey employees have access to a storage garage in the clean zone with equipment only to be used within the clean zone, and one on the dirty side for use only in the dirty zone.

Additional biosecurity was gained through filling any saw cuts on concrete with caulking to prevent particulates from settling in. “One of the project members suggested we used ‘an entire truckload of caulking’ to ensure no cut was missed!” Mirda reports.

In addition, as part of the ventilation system, the farm features darkout hoods large enough for a person to fit inside, which makes it easier to ensure proper cleaning of these areas. There is also a wash station for vehicles on the ‘lay side’ of the farm.

Berkdale also features an innovative truck-loading dock for the egg cooler, complete with dock-levelling equipment and seal for the truck. This system allows for the use of trolleys to transfer eggs from the storage room into the trucks rather than the traditional moving of eggs by hand.

“Temperature shock is avoided,” explains Mirda, “and there is also no need for an outside connection, in that the delivery driver can stay in the cab while the eggs are loaded by internal staff. It’s a best-practices system that improves worker health and safety and minimize the handling of eggs.”

Results so far
Berkdale began operation in August and all systems are running smoothly with birds doing extremely well. Mirda says the winter season is when staff expects to see the new design of this facility to show its full benefits. This will be in part because use of the barns on the lay side (that are connected between egg house and laybarn) will begin then, and also, from a comfort and efficiency standpoint, workers will not have to go outside as much during the harsh weather.

When asked what factors other poultry operators should consider in building a similar facility isolated from all other farms in the company, the Berkdale staff had good input. They pointed to the decision of whether to try and relocate current employees or search for new employees close to the new facility who may need a lot of training and support. They also pointed out that you have to be ready for staff and equipment from other company facilities to be dispatched as needed for hands-on assistance at the ‘orphan’ facility.

Scott Rowland, general manager, Americas at Hybrid Turkeys says that although this facility came at a significant cost, the company leaders feel that the investment in Berkdale is the next step in biosecurity for both customers and staff.

“The features of this facility were designed to secure the supply to meet our customers’ needs, while ensuring excellent health and safety of our workers,” he says. “This investment signifies our dedication to continuous improvement. By spreading out our operations, we are working towards the next generation of biosecurity.”

Hybrid Turkeys also has production and research facilities in several other locations in Canada, as well as in the U.S., France, Poland and Hungary.