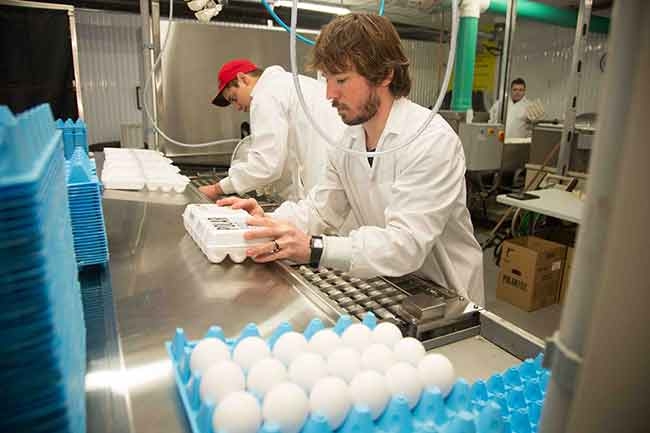 They don’t have polar bear insignias stamped on them like Canadian diamonds, but eggs from distributor and marketer, Polar Egg are gaining popularity with Northwest Territories (NWT) residents as a fresh, locally-produced alternative to eggs shipped from the south.

The launch of the egg grading and marketing company in Hay River, NWT in 2012 marked a significant milestone for the region, and brought a smile to many territorial and Egg Farmers of Canada authorities eager to encourage Northerners to consume locally-produced eggs. After the egg grading for human consumption operation in Hay River shut down about 10 years ago, NWT residents could not purchase locally-produced eggs in retail stores despite several local poultry farms producing eggs commercially. The grading station was still functioning, but essentially was only grading eggs for industrial use and shipping them south. Now, many Northerners can consume fresh, locally-produced eggs thanks to a half a million dollar investment by Hay River Poultry Farms Ltd, with financial support from both the NWT and federal governments. The funds were used to purchase equipment, upgrade facilities and train employees in grading eggs for human consumption and understanding the need to maintain a clean facility.

Operating under the Polar Egg brand name, the company is owned by Hay River Poultry Farms. Eggs are supplied to Polar Egg by this company and Choice North Farms, both located near Hay River. They operate a fully modern, Canadian Food Inspection Agency (CFIA)-approved, grading station employing seven people in Hay River. Kevin Wallington, Polar Egg sales and marketing manager, joined the company in 2011 to spearhead the project and to obtain CFIA certification, which was no easy task. The facility began selling eggs locally for human consumption in December 2012.

The project, which was supported with about a $150,000 contribution from the territorial and federal governments, involved removal of all the old grading equipment and installation of state-of-the-art Brazilian grading machines. They also completely renovated the grading station interior. Then came the process of hiring and training employees and obtaining CFIA certification, which took over a year. Today, Polar Egg is grading between 30,000 and 50,000 eggs per day and is a small operation compared to grading businesses further south that typically grade several million eggs per day.

“The grading process is predominantly manual,” says Wallington. “They are loaded by one individual, processed through a machine, candled by a second individual, and then there are two people who offload and package them by hand.”

While the company currently markets about two million eggs to northern retailers from annual production of about 34 million eggs, their goal is to achieve six million eggs per year. However, they have experienced a few roadblocks to expanding their market in NWT.

Northern food retailing is dominated by a couple of companies located in southern Canada, and because of contractual agreements with egg producers in the south, several have so far declined to carry the locally-produced Polar Egg brand in their stores. This is despite what Wallington says is high demand from northern residents for locally-produced eggs. There are exceptions, such as the Loblaws store in Yellowknife, which carries the Polar Egg product. However, other retail outlets tend to be independently-owned, local businesses. Wallington says he hasn’t given up because there is tremendous support being voiced for the Polar Egg product among local store managers and brisk sales have occurred in test market endeavors. He says he will continued to try to crack that distribution egg in the corporate head offices of the major retailers, primarily headquartered further south in places like Winnipeg, to achieve Polar Egg distribution through their stores in the North as well.

He adds that in theory, Polar Egg brand products should be highly competitively priced in local retail stores because the company does not have the same transportation costs as retailers who ship in eggs supplied by southern producers. However, Wallington says Polar Egg can’t control how much local retailers want to mark up their product. To help large egg consumers, such as people who bake a lot of food, Polar Egg has established an alternative purchase option. Customers can buy more competitively priced, loose eggs in bulk directly from the company’s grading facility in Hay River.

While other Canadians take access to fresh food for granted, it’s not common in the North and initiatives like Polar Egg are helping to change that. At present, the eggs are available in several communities, with core distribution in Yellowknife, Hay River, and Fort Smith.

“In the last couple of years, we have seen a resurgence of farmers markets in Hay River, so in the summer time, people can access some fresh produce that’s grown here,” says Wallington, “and obviously we have a lot of fish in Hay River. So you can get a lot of fresh fish. The fresh eggs are a great addition and I have been made aware that people are very excited that they can get farm fresh eggs in Hay River.”