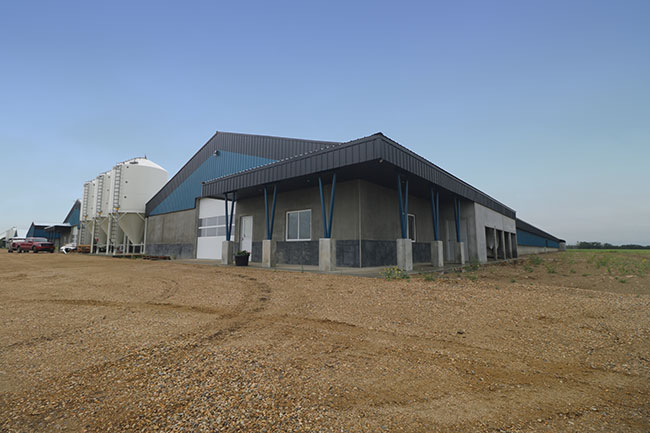 Pre-cast concrete barns last for generations, require little to no maintenance and can be easily expanded. PHOTO CREDIT: Eagle Builders

Just as genetics, environmental controls, biosecurity tools and all other aspects of poultry production continue to evolve, barn design is changing as well. Canadian Poultry checked in with some of Canada’s leading experts about current best practices and how to avoid some of the mistakes still being made in new barn construction.

Poor poultry barn design, according to Ron MacDonald, can result in poor air distribution. This, in turn, can threaten bird health, increase heating/ventilation costs and shorten building lifespan. Not to mention the costly fixes.

MacDonald is the semi-retired owner of Agviro consulting firm in southern Ontario. A few years ago, he co-led a four-day seminar in Alberta on best principles of barn design. It included on-site demonstrations and both private industry and government personnel attended.

Getting airflow right
In general, attention to detail is what separates good barn designer-builders from the pack, notes Mark Armstrong, who co-led the seminar with MacDonald and who owns Armco Solutions consulting firm in Fergus, Ont.

In particular, Armstrong notes that inadequate airflow is a problem that’s still turning up in new builds of some naturally ventilated barns, “where there is very little understanding of the design features and conditions that drive airflow movement.”

How barns are sited is an important factor for airflow. Will Teron, director of structural engineering at Tacoma Engineers of Guelph, Ont., has seen situations where naturally ventilated turkey barns weren’t sited so that natural ventilation can provide any benefit. “Proper separation of buildings is imperative,” he says.

Werner Brouwer, project development and sales manager at Eagle Builders in Blackfalds, Alta, agrees. He notes that a barn will function differently depending on its location and prevailing wind direction. “Do not position your barn on the farm just because it looks or fits the best in that spot,” he says.

Airflow can also be worsened in some cases when the installers aren’t given the specifics for various items. In those cases, they might make ill-advised judgement calls, explains Kelly Lund, project engineer in the Environmental Stewardship Division at Alberta Agriculture and Forestry.

She gives the example of interior metal cladding that lines a barn ceiling, where ribs in the metal are installed perpendicular to the airflow from the ventilation system. This can really impact the flow, Lund says, especially in winter. The ribbing obstructs the incoming airstream, causing it to lose speed and drop instead of travelling along the ceiling and playing its role in good air mixing.

Airflow can also be obstructed, she says, in situations where there was a late change in equipment selection or add-ons but no one checked to see if the design had to be adjusted to accommodate these alterations.

“So, maybe no one bothers to check the location of the electrical cables and light fixtures, because in the original design the airflow wasn’t supposed to travel along the ceiling in a certain location but with the new equipment it does. And so now it’s obstructed by the electrical, again causing the airstream to drop,” she notes.

“So, then there might now be a choice about whether it’s feasible to relocate the electrical or whether they might have to bring the fresh air in with a duct, but ducts can have their own issues for cleaning and biosecurity.”

Armstrong adds that some barn designers aren’t properly accounting for heater venting. “Ontario now has a natural gas code regulation that heaters must either be vented outside or an engineer is required to certify that the ventilation system provides adequate airflow,” he explains.

“Issues occur when the designer/builder has not considered how to locate venting. A building gets constructed with the intent to vent outside, but when the heaters are installed, various factors such as equipment location result in decisions made to vent inside.” 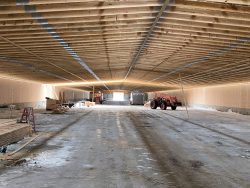 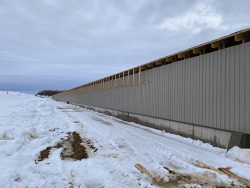 Beyond airflow
Beyond siting and airflow, experts stress that it is important to ensure airtightness in new builds. A tight membrane between the barn and attic is important, Teron says, to prevent rusting and condensation in the attic.

One other issue that Armstrong has noted on occasion in recent years is the building of large barns “with the same ideology” used in small barn construction but just scaling upwards. “The idea that this type of layout worked for, say, a 40×200’ in the 1980s will work for a 65×700’ barn today,” he explains, “is not always accurate.”

Teron echoes these thoughts, specifically related to airflow. He notes that with modular loading systems becoming the norm, new barns these days are usually one-storey, longer and larger (his firm just constructed an 80X600’ broiler barn for a client).

“As barns have increased in size, people just put in bigger fans and it was too much airflow for the birds at ground level,” he says. “More and more, we are placing fans so that they are stacked vertically. This allows for lower windspeeds at bird level, but the total volume of air can be circulated well so that summer heat is dissipated.”

Lastly, Brouwer advises that from what he’s seen, sometimes “not enough is done to make sure the barn is built on solid ground.” A geo-engineer should, therefore, be involved before the final barn siting decision is made.

Best practices
Of course, farmers needing a barn contractor should look for one with experience. And, while it’s standard advice in any project to ask for references and follow up with them, people don’t always bother. But not only should farmers make sure the references of their potential builder are real and fairly recent, they should also look to references for another important part of barn design – the opportunity to visit existing barns of various designs, ask questions and take lots of notes.

In the end, Armstrong explains that choices relating to design can come down to personal preference and familiarity. However, he adds a word of caution to producers who are presented with really new designs. Some of these designs, he says, “suggest everything that has been done in the past is incorrect. There have been good and bad designs in the past, but be wary of new designs that present no reasoning or comparison to good systems currently operating.”

For his part, when Teron recently served on a taskforce involved in updating the National Farm Building Code (to be released later this year), he saw that there is a lot of variation in construction approaches across the country. He says it was very positive to learn about how things are done elsewhere. Sharing this information along with best practices is something he’d like to see more of. He notes that the Canadian Farm Builders Association is working on this, developing more pooled resources and achieving more of a national presence.

Teron would like to highlight a way in which the new code affects poultry barn construction specifically – its support of wood-framed barns. “They are structurally sufficient and durable, cost less than concrete and at any size, there is now no requirement for sprinklers,” he says. That is, it’s up to farmers if they’d like to put a sprinkler system in place.

While wood-framed barns are certainly a good option, Eagle Builders specializes in pre-cast concrete barns and promotes them for their durability and the way they can easily be expanded. “Why not have a solid barn that is easy to clean and maintain?” Brouwer asks.

“Design for your day-to-day work that you do in and around the barn. If you want to have a barn that will last a lifetime, you need to design for it and you need all the correct team members. Yes, the barn will cost more at the start but it will last for many years.”

He adds that shape, size and design of the barn all have an impact on cost, “so work with your builders to come up with the best design and price together.”