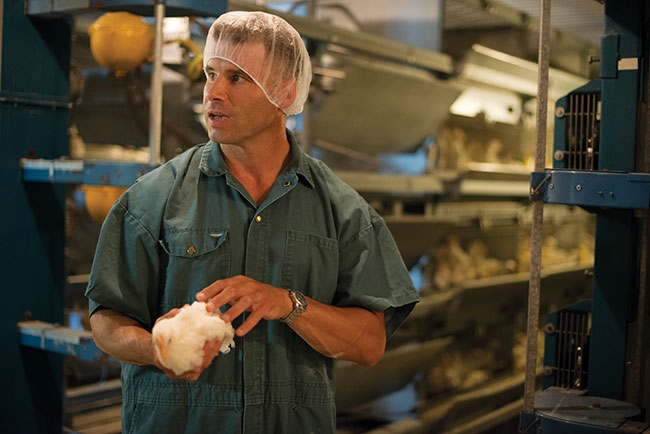 Here we present a summary of their current disease updates. Specifically, we look at what’s stabilized, what’s sprung up and why. While not all the answers are ever apparent, one thing is certain – with the pace of antibiotic phase-out and the industry-wide changes in layer housing, the disease landscape in Canadian poultry production will continue to evolve.

B.C.
In B.C., turkey producers are mainly seeing bacterial septicemia infections from E. coli, histomoniasis (Blackhead), gangrenous dermatitis and Bordetellosis. Layers are experiencing egg peritonitis, Marek’s disease/leukosis, cannibalism and infectious laryngotracheitis (ILT). Ambrose notes that there is currently an ILT outbreak in B.C. that appears to be vaccine-related rather than a field strain. He says this emphasizes the importance of a robust and effective vaccination program where vaccines are applied as per label directions only.

In specialty and small layer flocks, Ambrose and others are watching MG/coryza. “It can be a single or duel infection and we’re seeing quite a few cases,” he says.

Broilers are facing bacterial infections from E. coli, such as omphalitis. There are fewer leg abnormalities from reovirus than two years ago, Ambrose adds, with better vaccination in place. There has also been vaccine reformulation for inclusion body hepatitis (IBH) for virus types being seen in the western provinces. Broiler breeders are facing bacterial septicemia from E. coli/staph, Salmonella, staph arthritis and cannibalism.

Turkey producers are seeing bacterial infections, and turkey poult producers, brooder pneumonia from aspergillosis. “Gangrenous dermatitis at about 47 days seems to be an up-and-coming turkey disease,” Ambrose adds. “There were five or six cases in November in Alberta, and it can all be controlled with good barn management. It also responds well to antibiotic treatment.

“There is no preventative or treatment medication for histomoniasis (Blackhead), however,” he continues. Producers know how devastating that disease can be, he says, noting that while feed ingredients for general health support (such as yeast-based or essential oil products) can be given, they may or may not make a difference.

“There is a treatment available in Europe that is not registered in Canada,” he adds, “but there is a group of veterinarians actively lobbying Health Canada and CFIA to approve its use here.” He observes there isn’t much willingness to discuss Blackhead management at the regulatory level.

Manitoba
Broiler producers in Manitoba are seeing IBH. What’s more, in RWA production Ambrose says there have been outbreaks of coccidiosis/necrotic enteritis (NE) in non-medicated flocks. Bacterial infections from E. coli, leg issues from reovirus and bacterial enterococcus are also present. Layer flocks are dealing with egg peritonitis/polyserositis, cannibalism as well as coccidiosis/enteritis.

Broiler breeder producers are seeing fowl cholera, male management issues and Salmonella (S. enteritidis). “We’re all on guard for Salmonella,” reports Ambrose. “Manitoba has been clean for this historically, it’s literally had zero isolations, and this year there was at least one case. It’s a little alarming. It is most likely a biosecurity breach from mice or darkling beetles being the vector, although producers in Manitoba have done a fantastic job of rodent control historically. A vaccination program is now in place.”

Ontario
In broilers, McKinley Hatchery’s Petrik reports that IBH has been increasing in incidence, and the impacts can be minor or more severe (up to two per cent mortality). “Reovirus is a real problem, especially in the breeders,” he notes. “Some chicks were euthanized to deal with a particular situation.” Cocci and NE are fairly stable, but Petrik notes that control programs are changing as broilers under RWA production are more susceptible.

Some bronchitis was apparent in Ontario broiler flocks this year as well. In layers, some ILT appeared in the last year, which was a bit surprising to Petrik and others, and he believes the cases were primarily due to issues around proper vaccinations.

Quebec
Some broiler producers experienced bronchitis and Petrik says vaccination is effective to some extent. There was also some IBH, including one case with almost 15 per cent mortality. In Quebec’s layers, there were a few cases of false layer syndrome (see sidebar). Some major ILT infection was also apparent, 10 cases, and quarantine efforts were put in place to stop the spread. “The industry also reached out to backyard flock owners in the risk zone and offered free vaccinations,” Petrik reports. Turkey producers had a couple of Blackhead issues.

What’s ahead for 2019
With layers moving out of conventional housing, the disease landscape is changing for them, Petrik explains. Free-run and aviary housing conditions allow birds to have access to their manure, so cocci, NE and E. coli infections are very important to try and prevent. Overall, both vets agree that Canada’s poultry industry is dealing with a lot of regulatory issues. “We’ll deal with it, but growers need to remember that therapy or vaccination alone is of little value unless they are accompanied with improvements in all aspects of management and biosecurity,” Ambrose says.

A disease success story
Petrik reports that before 2016, false layer syndrome had only been seen in Europe and China. But that year, there was an outbreak in Eastern Canada – about 22 flocks in Quebec and Ontario were affected.  With industry action, however, there were only three cases in the last year (mostly in Quebec), with less severity as well (40 or 30 per cent of a flock had been affected previously and last year, it was only about six per cent).

It was a tough situation to deal with, as it’s not a condition that’s noticed until birds are ready to lay (19 weeks of age). Autopsies and other signs were used for diagnosis.

It appears that the strain in Quebec and Ontario is the same. “When we sequence a virus, we only sequence about eight per cent, but analysis of that eight per cent indicates that the viruses are more than 97 per cent identical,” Petrik explains. “No one is sure how it was spread, but layer pullets move back and forth over the Quebec/Ontario border, as do live broiler chicks.”

The great improvement in incidence and severity of the disease is due, says Petrik, to a highly-collaborative industry response. “The amount of communication and co-operation was really high,” he reports. “From our first inkling of what we had to having a response program in place was about a month. That’s pretty incredible. Everyone worked together on increased biosecurity and more.”