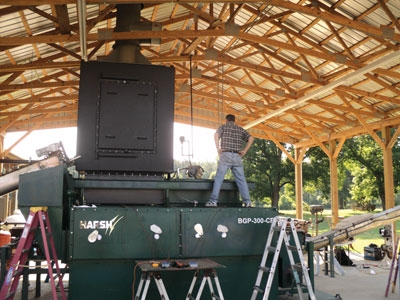 The BGP gasifier is assembled at M. Marsh Farms. The goal is to consistently produce 20 to 30 kilowatts of power from the fuel produced from gasifying poultry litter.

Like clockwork, South Carolina farmer Marc Marsh watched a manure broker cart away and market the poultry litter gleaned from cleaning out his 12 barns after his pullets matured or egg layers reached the end of their productive lives.

While it didn’t cost him a dime to dispose of the litter, he didn’t make any money on the transaction either.

He got to thinking that maybe there was some way that the farm could benefit from the litter, and that led him down the road to poultry litter gasification to produce the fuel to generate power.

While the project has proven that gasification of poultry litter to produce fuel to generate power is technically possible, Marsh sees greater potential in his farm operation to use the system to convert the poultry litter into a product called biochar that he can use in his turf business. Biochar contains many of the same beneficial chemicals as commercial fertilizer except for the nitrogen, but conversely, contains more carbon.

Marsh and his wife, Melanie, own M. Marsh Farms near Cheraw, S.C., about 70 miles southeast of Charlotte. It is a combination high-security, poultry breeding operation and turf business. The eggs produced on the farm are used by other poultry farmers to raise their egg-laying flocks and the high-quality turf grass grown on the 185-acre farm is used on golf courses, sports fields, lawns and commercial applications.

In 1990, Marsh graduated with a bachelor’s degree in poultry science from North Carolina State University, which led to a job with Tyson Foods. In 2001, the couple purchased its own farm.

The poultry operation generates more than 1,200 tons of litter annually, consisting of a combination of kiln-dried wood fiber bedding and scratching material mixed with chicken droppings. That bedding material is commonly used in South Carolina’s poultry industry because it doesn’t contain fungus, spores and moulds that could harm the flock. The farm houses about 100,000 chickens at a time, consisting of 50,000 laying hens and 50,000 pullets that are grown to become egg layers. It takes the pullets up to 21 weeks to reach maturity. It takes up to 45 weeks for the egg layers to complete their productive cycle. In the past, a contractor and farm employees would take between six and eight weeks to remove the poultry litter using a Bobcat and then sterilize the barns for the next batch of chickens at the end of each cycle. Prior to installation of the gasifier, a litter broker typically sold the poultry litter to other farms for use in corn and soybean crops as organic fertilizer.

Now, with the farm’s poultry litter gasifier in place, the barn cleaning is handled internally, the manure is stored securely on site, and conveyed, as needed, to the gasifier as fuel.

“The problem with using poultry litter as a fuel has not been the energy content but how to actually gasify it and convert it into energy,” says Burnette. “A lot of people have tried in the past 20 to 30 years and really haven’t gotten anywhere because of material handling problems.”

He says that poultry litter isn’t a consistent product; it can be sticky and has moisture problems.

“Everything that coal is, poultry litter is not,” he says.

Proper material handling of the litter from moving it from the barns to the storage sheds to feeding it into the gasifier was evaluated extensively as part of this demonstration project to find an effective solution.

With installation of the gasification system, M. Marsh Farms has purchased equipment to handle the barn cleaning in house. The poultry litter is now stored in two sheds with financial support from the United States Department of Agriculture’s EQIP program, consisting of about 10,000 square feet of storage. Farm employees fill a hopper located in the manure shed twice a day and it augers the manure into the gasifier at the prescribed rate of 200 pounds per hour.

The gasification process is a two-stage process called the Brookes Gasification Process (BGP) provided by a Canadian company called BGP Inc. Propane is used to heat the primary and secondary chambers initially to reach their operating temperatures. The heat cooks the poultry litter that enters the primary chamber, which creates off-gases. Some of these off-gases are used to substitute for the propane, at which point it can be turned off. A chimney draft propels the remainder of the off-gases to a secondary chamber where it ignites in a controlled, high heat environment. The heat from that ignition passes around a Cain heat exchanger to heat water to about 220 F. A pump circulates the heated water from the heat exchanger through an ElectraTherm-brand Organic Rankin Cycle, where it boils a refrigerant that drives a turbine to create power.

“You can sustain gasification of poultry litter theoretically all year long,” says Burnette. However, because the M. Marsh Farms installation is a demonstration project, it has run continuously for just three to four days at a time. Burnette says that this gasification technology applied to poultry litter is at its very early stages.

He adds the M. Marsh Farms project fulfils FPPC’s mandate, which is to demonstrate technology that finds alternative uses for nutrients, in this case, an alternative to spreading poultry litter on soil. Gasification produces energy and an ash byproduct, which has much less volume and weight, can be used as a soil amendment and is easier to store.

“We’re still not sure if these systems will work out economically,” says Burnette. The system components themselves are a bit expensive because so few are commercially available.

“Is this type of technology viable?” Burnette asks. “Yes. We know that we can generate electricity from poultry litter. This project in South Carolina served as a steppingstone and learning curve for us.”

One lesson learned is that farmers need to be able to use the equipment to generate more than electricity to achieve a return on investment. Because of the unique nature of this farm as a breeding operation, the energy is only used to produce electricity but poultry litter gasification demonstrates that it can also potentially generate heat for commercial poultry operations. This concept is being studied extensively by FPPC in other projects in the Chesapeake Bay
Watershed States.

Marsh says installation of the gasifier provides the farm with a number of benefits. It allows them to dispose of the litter on the farm, eliminates the biosecurity risk of the manure broker coming to the farm, and will also produce a new revenue stream, “which at the end of the day is our main goal.” In addition to sale of power, the process produces ash, which is sold as a soil amendment.

On-farm disposal helps the overall operation because they can now store and dispose of the manure when it is generated, which was a problem dealing with brokers because the manure sometimes became available when it was not optimal timing to land apply the product.

“There is not always a dependable market at a dependable price,” says Marsh. “We wanted to try to increase the value of the return of the product back to the farm.”

It took seven years for the poultry manure gasification concept to evolve from idea to reality. Marsh began talking about it in 2005 as he was working on his animal waste management plan. He says Burnette has been on the farm nearly every day of the week helping to inch the project forward. Other organizations such as the State of South Carolina, the federal Agriculture Department, and the Chesterfield Soil and Water Conservation District have also recognized the potential for poultry litter gasification and have provided financial support for the project. The Marshes have invested about 20 percent of the cost of the project themselves.

When Marsh and Burnette teamed up, Burnette was in the process of investigating the potential of a BGP brand gasifier in farm applications at North Carolina State University. The timing for launching the demonstration project was also good because the South Carolina’s Department of Agriculture had issued a request for grant proposals for alternative energy from biomass, which yielded a $200,000 grant.

So far, the project has produced power for sale to the local Lynches River Power cooperative intermittently and Marsh says he has yet to receive any large checks from the coop because of the small amount of power that the system has been able to generate consistently so far. However, he says that he has absolutely no regrets about becoming involved in the project, keeping in mind that it is a demonstration project aimed at investigating the technology, evaluating its potential, and discovering where there needs to be improvements. Burnette says that he is confident with potentially upgrading the capacity of the gasifier and a bit of tweaking, that the M. Marsh Farms poultry litter gasification system will be able to produce between 20 and 30 kilowatts of power consistently.

As a result of this project and the lessons learned, and with encouragement from FPPC, the State of South Carolina has submitted a proposal to develop a model to help guide the design performance characteristics of these gasification systems.