New research, one operating facility and a possible project to come, all relating to the use of poultry litter for power production 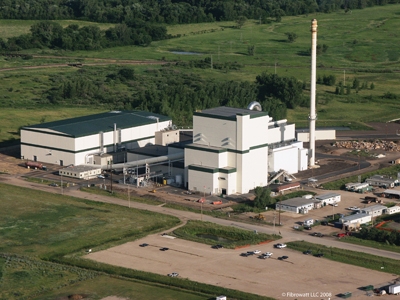 Fibrowatt is eyeing the Fraser Valley as a possible location for a poultry-litter-fuelled power plant (such as the one above). The poultry litter would be purchased from surrounding farms and burned inside the plant to produce electricity and ash.

In August 2010, British Columbia’s first biodigester began operating in Abbotsford – using, among other substrates, poultry litter. The B.C. government provided $1.5 million to assist in the development of the project (known as “Fraser Valley Biogas”) as a way to go beyond green electricity generation. “B.C.’s Clean Energy Act sets a target to ensure our electricity supply is 93 per cent renewable,” notes Sue Bonnyman, director of generation and regulation electricity policy at B.C.’s Ministry of Energy and Mines. “However, the current low electricity prices, due to B.C.’s very fine hydroelectric system, create challenges for a number of new or renewable technologies.” That’s one reason the province has made it possible for Fraser Valley Biogas to sell “biomethane” to the natural gas company Fortis, instead of using the digester’s biogas to make electricity.

Digester biogas must be “cleaned up” before it’s placed into any natural gas network (the biogas is then known as “biomethane”), and the scrubbing equipment required is costly. “Such a system thus only makes sense at larger-sized projects such as these, of at least one megawatt,” notes Matt Lensink, application manager with PlanET Biogas, the company that built Fraser Valley Biogas. (Another obvious limitation for digesters to sell biomethane is that they must also be located near a natural gas pipeline.) How many tonnes per day of dry or wet manure is required to run a one-megawatt system depends on the type of manure – and the type and amount of off-farm materials.

Fraser Valley Biogas uses liquid dairy cattle manure and solid poultry manure from four nearby farms, as well as a substantial amount of food industry byproduct. As the project is just beginning, Lensink says details are not available about things like how much poultry manure/litter is used per year, what overall percentage of digester feedstock comes from poultry litter, whether it’s placed directly in the digester after barn cleanout, and whether the farmer is compensated for the manure. However, no matter how much or how little manure is used at Fraser Valley Biogas, co-substrates are definitely needed for manure digesters to be economically viable, says CH-4 Biogas Inc. Systems Analyst Claire Allen. CH-Four has created a software program to analyze what amount of a given substrate, such as source-separated organics or fat/oil/grease, is advisable to add to what’s already present in a digester. The company has nine digester systems running in Canada, one in New York State and three more being constructed in Canada; they are all “combined heat & power” (CHP) systems, generating heat and electricity.

Unique to Canada
Fraser Valley Biogas is unique in Canada as an on-farm digester with biomethane being injected into the natural gas network. All others are at municipal sewage plants, landfills or food processing companies. Electrigaz Technologies Inc. president Eric Camirand notes that in Quebec the Ministry of Environment now subsidizes municipal biogas plants up to 66 per cent of capital costs, with the focus on injection of biomethane. Ontario is also looking at this concept; Electrigaz has done several studies for gas companies such as Union and Enbridge on scrubbing biogas and injection biomethane into their networks.

Digesters specifically for poultry litter
Biodigesters that run specifically on poultry manure are being investigated by Anna Crolla, a senior researcher at the Ontario Rural Wastewater Centre (located at the University of Guelph’s Alfred campus). The research project is being funded by the Ontario Ministry of Agriculture, Food and Rural Affairs (OMAFRA) and Natural Resources Canada-Canmet Energy. The anaerobic digestion process applicable to poultry manure is known as dry fermentation, Crolla explains. “It’s a process that can handle substrates with high solids content, greater than 25 per cent, whereas traditional digesters use wet fermentation with slurries containing solids contents lower than 15 per cent.” Dry fermentation is advantageous, Crolla notes, in that a smaller reactor is required compared to that needed for wet fermentation. The amount of effluent wastewater is lower as well, resulting in significantly reduced manure handling costs.

A dry fermentation digester usually consists of boxes into which the substrate is emptied through the use of wheel-loaders. After the boxes are sealed in an airtight fashion, the anaerobic digestion process begins. About three to four weeks later, most of the digested substrates are removed and the boxes are filled again (for higher efficiency, some of the residual fermented material with high concentrations of bacteria is left in the boxes).

Challenges
However, there are a number of challenges to making dry fermentation of poultry manure work. Crolla explains that when poultry manure (which is rich in nitrogen) is anaerobically digested, the high solids content causes ammonia to accumulate, which slows the digestion down (and production of biogas) down. One way of dealing with this is co-digesting the poultry manure with carbon-rich substrates to increase the C:N ratio, so Crolla is studying how the addition of energy crops works to boost performance of a dry fermentation digester. “The energy crops that we’re studying will include corn silage, corn stover, wheat straw, switchgrass (non-leguminous) and, clover, alfalfa and soybean silages (leguminous),” Crolla notes. She began work on evaluating optimal C:N ratios, pH and moisture content, as well as studying the effects of ammonia accumulation on substrate digestibility, in September 2011.

Bench-scale digesters will be built this coming summer.

Another project in B.C.?
A major developer, builder, owner and operator of electrical power plants fuelled by poultry litter and other agricultural biomass is currently eyeing the Fraser Valley for a possible project. Pennsylvania-based Fibrowatt was founded in 2000 by the management team that built the world’s first three poultry- litter-fuelled power plants in the U.K. in the 1990s. These plants have converted more than seven million tons of poultry litter into more than four million megawatt-hours of electricity (serving about 150,000 homes) and 500,000 tons of ash fertilizer.

In 2007, Fibrowatt built the United States’ first poultry- litter-fuelled (about 50/50 chicken and turkey) power plant in Minnesota, a 55-MW facility that serves about 40,000 homes. The poultry litter is purchased from surrounding farms through long-term contracts and spot purchases, transported in tightly covered trucks and stored at negative pressure to prevent the escape of odours. Inside the power plant, the litter is burned at very high temperatures, heating water in a boiler to produce steam that drives a turbine. A large amount of ash is also produced.

“We sell 90 000 to 100 000 tons of ash a year to a fertilizer company,” says Jim Potter, president and COO of parent company Homeland Renewable Energy Inc. “The rating of the ash is 0-7-7 for NPK, as all the nitrogen in the litter is combusted into N2 gas.” (Note that by-products other than biogas that are created in Canadian digesters are also being used; the effluent is spread on fields, and the solids from the digester tank are used as cattle bedding.)

Will it work in Canada?
Although low electricity prices in B.C. pose a challenge to any Fibrowatt facility moving forward in that province, Potter says, “We hope that people will place a premium on the other services a project such as this can provide. Our plants offer an environmentally responsible and useful outlet for poultry litter in regions that produce more litter than can be utilized for land application. This enhances the sustainability of the poultry industry.” Fibrowatt is also pursuing projects in areas of the U.S. where excess nitrogen and phosphorus is being released into water sources, such as Chesapeake Bay.