Researchers collaborating to get a handle on emerging strains. 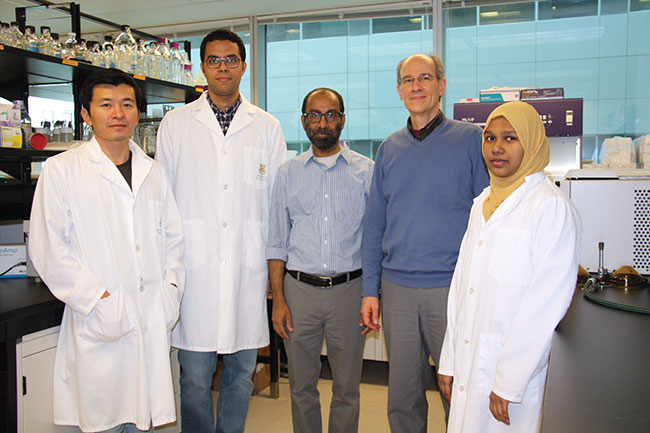 Outbreaks of infectious bronchitis (IB) have been steadily increasing in Canada over the last several years, often occurring in broiler and layer breeder flocks, as well as commercial flocks. There’s a troubling trend behind the spike in these outbreaks. Based on diagnostic testing done at the University of Guelph’s Animal Health Laboratory, there is an emergence of variants strains of the infectious bronchitis virus (IBV) that are posing new control challenges for poultry producers.

Researcher Faizal Careem is on the search for new control strategies for producers. It’s part of a five-year research project he is conducting to evaluate the economic impact of IBV on Canadian layer sector, as well as evaluating vaccine strategies for control of IB caused by the Delmarva (DMV) variant. Careem is head of the Department of Ecosystem and Public Health and an associate professor of virology at the University of Calgary Faculty of Veterinary medicine.

The growing presence of new IBV variants signals a need for different strategies to provide effective protection from the virus that, in layers, can decrease egg production by up to 50 per cent compared to unaffected flocks.

“We are evaluating four important IBV variants that are commonly isolated from flocks in Eastern Canada in recent years,” Careem says. There are currently no vaccines in Canada that specifically protect against the DMV variant – one of the four variants that Careem is tracking. But it’s something that he hopes to shed new light on.

“IBV is notorious for mutations and recombination, making control challenging,” Careem says. “But we don’t know whether these variant strains of IBV are impacting the reproductive performance of birds. And if these strains do have an economic impact, we need to develop strategies to help producers deal with IBV, which could include optimizing vaccination strategies and developing new, more effective vaccines.”

With the growing presence of IBV variants, producers need to consider potential cross protection in an overall IBV control strategy. Cross protection is a strategy for combining and alternating different types of IBV vaccines to deliver better overall immunity to birds and offer better protection against various IBV strains, including some of the variants like DMV that have no registered vaccines available in Canada to specifically control them.

Careem is expecting his first set of data by mid-2020, evaluating egg production issues in layer flocks that have the DMV variant of IBV. Part of his project includes evaluating the economic impact of IBV in Canada. “We will also be looking at whether existing vaccines are effective against the DMV variant of IBV, and if not, we’ll need to think about developing new vaccines.”

In the meantime, if producers have an IBV outbreak and want to check for the presence of variants, Careem suggests they contact their veterinarian to collaborate on ways to optimize an IBV vaccination strategy. “Veterinarians can test the flock for the presence of IBV variants and adjust the vaccination protocol to provide alternative control strategies, including making sure there is cross protection,” he says. “Tightening biosecurity is another way to reduce the risk of pathogens on the farm.”