Metabolomics is a promising field of poultry research that could improve production and bird health. 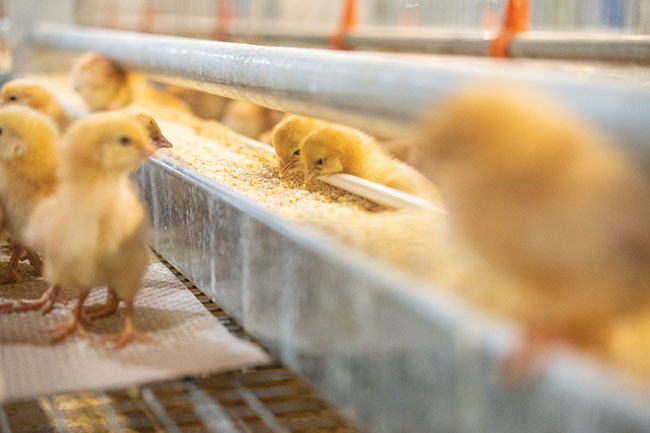 An emerging field of research could help the poultry industry fine-tune nutrition programs through science to emphasize bird health, production and feed efficiency.

Metabolomics is the study of the changes in metabolites produced by microbes and poultry in response to changes in their microbiome. (This field is also applicable to people and other livestock.)

The microbiome represents all the microbes – bacteria, fungi, protozoa and viruses – that live on and in an organism. It is essential for development, immunity and nutrition. Globally, scientists are increasingly paying attention to the microbiome and the role it plays in both animal and human health.

It was advances in the field of genomics, such as the sequencing of human, animal and plant genomes, that are helping drive research in the “omics” fields, influencing everything from the search for genetic markers to development of personalized nutrition and medical care.

Metabolomics uses advanced analytical chemistry techniques and differs from the other “omics” fields by focusing on molecules, which are smaller than most proteins, DNA and other cellular macromolecules.

Leader in the field
Shima Borzouie is a PhD student at the Atlantic Poultry Research Institute in Nova Scotia, working with Leslie MacLaren and Bruce Rathgeber from Dalhousie University’s Department of Animal Science and Aquaculture.

Her current research focuses on identifying metabolomic markers for health in laying hens. She is rapidly becoming one of the leading poultry scientists working in this emerging field, which holds significant promise for the industry.

“Metabolomics can be used in the poultry industry to look at the impacts of diets, drugs, or infections on poultry health, welfare and productivity,” Borzouie explains, adding this approach also offers the potential to investigate and evaluate metabolic variations caused by environmental conditions or genetic mutation.

“Metabolic studies can also be a useful framework for research into meat quality, egg quality and productivity,” she says.

After completing an undergraduate degree in plant science at the University of Tehran in Iran, Borzouie went to the University of Alberta to do her master’s degree. That’s where she began working on the Alberta Food Metabolome Project in the Metabolomics Innovation Centre under David Wishart.

She helped identify and quantify the chemical constituents in a large number of Alberta-grown fruits, vegetables, cereals and meat products to create a fully web accessible food composition database – the Alberta Food Composition Database (AFCDB). Chemical constituents are what give foods their flavour, colour, taste, texture and aroma.

“We believe it is one of the most comprehensive food ingredient databases available,” she says. “I was lucky to start work in such a large and interesting project.”

She began her PhD at Dalhousie in the metabolomics field after her husband, Younes Miar, joined the university’s faculty in 2016 as an assistant professor of animal genomics and Industry Research Chair in Mink Genomics at Dalhousie University.

Through her research, she is trying to gain an understanding of how the metabolic impacts prebiotic seaweed supplements, heat stress and genetic strain interact in the blood to affect laying hen health. She’s doing that using a combination of blood chemistry, hematology (the study of the physiology of blood), hen performance and their metabolic profiles. 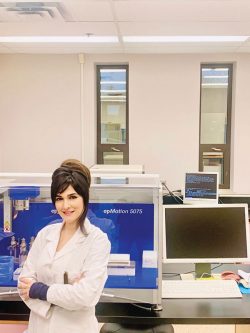 Shima Borzouie, a PhD student at the Atlantic Poultry Research Institute in Nova Scotia, is rapidly becoming one of the leading poultry scientists working in the metabolomics field. PHOTO CREDIT: Shima Borzouie

Garnering praise
And her results are garnering attention. In 2019, she was recognized with the “Best Poster Award” out of 203 participants at the 70th annual meeting of the European Federation of Animal Science held in Ghent, Belgium.

The project included long and short-term trials. In the short-term trial, white (Lohman LSL-Lite) and brown (Lohman Brown-Lite) laying hens had their rations supplemented with red seaweed Chondrus crispus at three per cent for 21 days.

In the long-term trial, the same bird strains received diets supplemented with either three per cent Chondrus crispus or half a per cent of brown seaweed Ascophyllum nodosum for 41 weeks, ending with a four-week heat-stress or control period.

Overall, results showed that the white laying hens produced more eggs and had better feed efficiency with the seaweed supplementation and were less susceptible to the negative impacts of heat stress.

“Seaweed supplementation increased the feed efficiency in the short term, providing further evidence of its suitability for use in laying hens,” she says. “We also found no negative impacts on overall bird performance from the longer-term supplementation with the seaweed prebiotic.”

Next steps
She’s now working on more samples from the same trials, looking at how the hens’ intestinal cells respond to prebiotic supplementation as indicators for overall gut and bird health. Part of that work includes studying the changes in the sample metabolites and looking at how biomarkers with links to the intestinal system could reveal new ways that prebiotics could be used to positively impact bird health.

“We’re in the middle of this work with poultry but I hope it can be used in the future for other work, including in human medicine,” she says. “This is a very promising field. The application of metabolomics in human science is much more advanced, but we are trying to show we can apply it to animal science and for the benefit of animal health as well.”