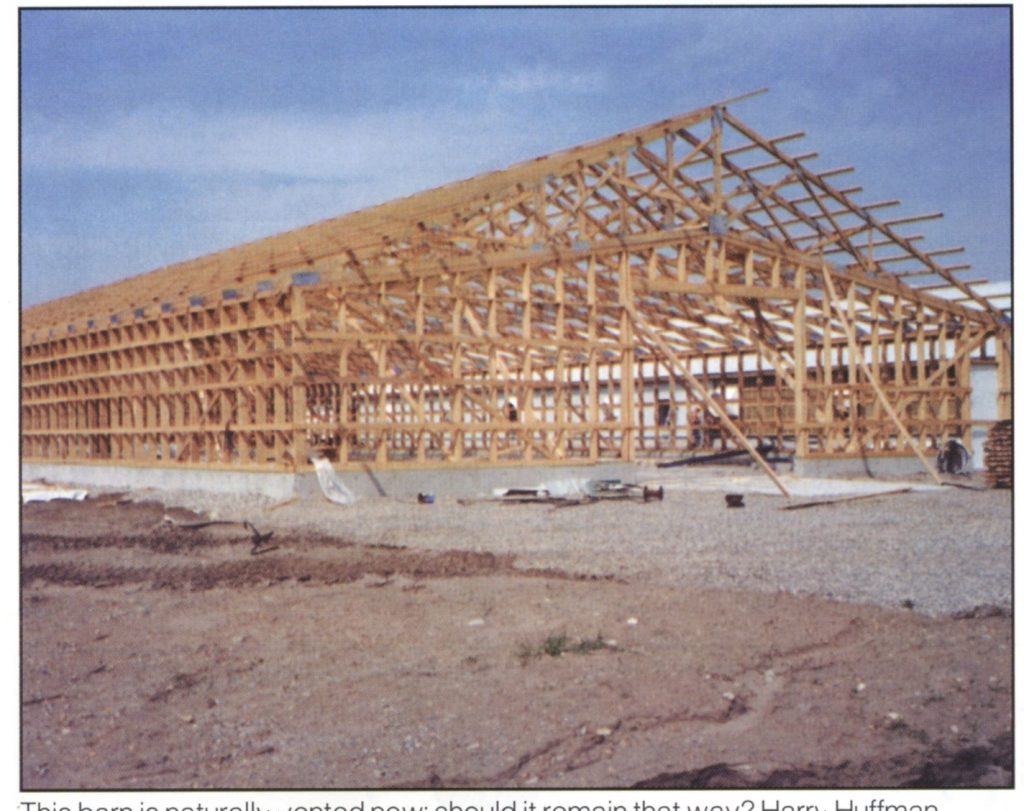 This barn is naturally vented now; should it remain that way? Harry Huffman provides some answers.

You’re building a new barn and one of the many questions that runs through your mind is whether you opt for power or natural ventilation.

Harry Huffman, a ventilation expert with the Ontario Ministry of Agriculture and Food, told turkey producers at the 1999 annual meeting of the Ontario Turkey Producers’ Marketing Board that there is a great deal of information available, but no easy, ultimate answer.

“I don’t think there is a right choice in barn selection. You have to decide what you want to work with,” he said at the London, Ont.  meeting.

Either system can work well, but the system selected must suit the management system and the location.

For example, a good location with sufficient space around it is essential for a naturally ventilated barn. Barns with power ventilation are much more flexible as to location, he said.

That is just one element, albeit a critical one, in the choice of systems.

But everything that goes into the decision must be in response to the question: “what are we really trying to do?” Huffman said.

The answer is equally straight forward. “As soon as we put animals in a barn we have to ensure fresh air – especially with turkeys,” he said.

You must also maintain the barn temperature in the animals’ comfort zone and that is especially important with turkeys which are less tolerant – especially when they are young – of inappropriate temperatures than other species.

As the birds age their comfort zone widens.

Once a comfort zone has been established in a barn, you want to maintain it, he said.

“You can’t do that with a lot of naturally ventilated barns,” Huffman said. But so long as temperature change happens slowly the turkeys will adapt.

Another factor is humidity which must be kept at a reasonable level.

“If you get wet litter, it stays wet,” he said. Adding to the problems will be ammonia gas which is attracted to the moisture.

“We want to keep odors and gases at a reasonable level and that is directly related to humidity,” he said.

Humidity will also be affected by the temperature of the incoming air. Cold air doesn’t hold as much moisture as warm air.

The rule is that for every 10 degree centigrade rise in temperature air will hold twice as much moisture. “Warm air is a super good sponge,” he said.

And because warm air rises it can be removed from the barn by fan or chimney. The air expelled by the birds is warm and will rise.

This allows for the removal of moisture, but  can contribute to drafty conditions, which are to be avoided. As the warm air rises and is removed cool air moves in to fill the space. The barn should be designed so that the incoming cool air is warmed by the exiting warm air.

Another factor in ventilation is the presence of obstructions. “Air doesn’t like to make 90 degree turns,” he said.

In the case of naturally ventilated barns, which generally have better air quality because of the breeze going through the building, outside obstructions can have a major impact.

Obstructions will affect the air flow for a distance 10 times the height of the obstruction, he said.

Huffman also gave a quick rundown of the advantages and disadvantages of power ventilation versus natural ventilation.

In those circumstances fans have a better opportunity to maintain proper conditions inside a barn.

But 80 per cent of the time it doesn’t matter what kind of system, he said.

Growers are also going to have to do a better job of removing carbon dioxide. Studies show that up to age five or six weeks an air flow that controls moisture is sufficient to control carbon dioxide. But as the birds grow, removal of carbon dioxide requires more air movement, he said.

And when buying ventilation equipment, Huffman advised the growers that the cheapest option is not always the most economic.

For example, more expensive fans may be worth the money because they last much longer. It is also not advisable to skimp on insulation because a well-insulated barn is always easier to ventilate, he said.

But as to which type of ventilation system is best, Huffman said there is no pat answer.

Related
Ventilation system takes chill off
Cross-ventilation barn design for poultry: A North American first
Ventilation: Get the Best From Your System
Ventilation in poultry houses during breeding