An Achievement in Poultry Research 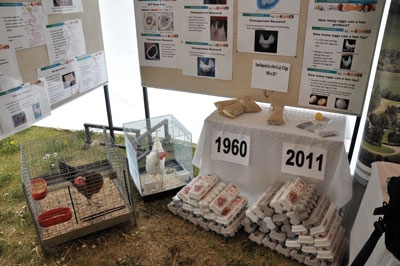 The Poultry Research Centre presented numerous displays to convey facts about the poultry industry at its Open House for elementary school children and industry representatives.

He says he was poultry when poultry wasn’t cool. In 1985 while still a Ph.D. student at the University of Guelph, Dr. Frank Robinson saw a job advertisement for a poultry researcher at the University of Alberta. Despite feeling he didn’t have enough experience, he was encouraged to apply for the position by a friend. The rest, as the saying goes, is history.

Upon arriving at the UofA for his interview, Robinson says that it only took five minutes of speaking with poultry researcher Dr. Bob Hardin to convince him that he wanted the job. He toured the poultry unit and realized that the technicians and barns were waiting for a research team to come in and fill the barns with research birds. “I saw a physical infrastructure waiting for people and poultry,” he says.

Since the university was unable to narrow the field of candidates to one, it decided to hire the top three: Robinson, Dr. Vicki Baracos, and Dr. Jeong Sim. They started their new positions in October 1986. The team spent their first several weeks trying to establish a greater poultry presence in the department of Agriculture, Food and Nutritional Sciences (AFNS), a department that at the time was dominated by beef, swine and dairy research.

New Territory
The team had a unique idea – to host a “Poultry Day”, bringing poultry producers in the province to the research farm and talk to them about how the team wanted to work with them, and what kind of research should be taking place.

“We were really charting new territory,” says Robison. “Poultry was not the thing that it is today. No one had thought to bring producers to the research farm before.”

This “Poultry Day,” held in the spring of 1987, was the start of what is now known as the university’s Poultry Research Centre (PRC), an extremely successful model of research collaboration between the poultry industry in Alberta, the UofA, and Alberta Agriculture and Rural Development (AARD).

In the early days of the PRC, the team only had an office with a phone, and start-up funds were scarce. But this slowly improved, as industry recognized the value of research. Robinson also credits the invaluable assistance of retired poultry science professors Alex Robblee and Don Clandinin for making the PRC what is today, and helping find funds for some its first graduate students.

teaching
The PRC has also become known for its excellence in teaching. Robinson says in his early teaching days with undergraduate students he began having a class research project, having students work in teams and coming up with their own ideas. “Over the years, these projects have become a key part of who we are,” says Robinson. Robinson, Korver and Zuidhof have all been the recipients of multiple teaching awards.

Model of success
The following day, the PRC held it’s annual meeting at the Snow Valley Ski Club. Pawlina stated that the partnership between the UofA, AARD, and the province’s poultry industry has “a great spirit” and she thanked staff, students, researchers, and industry supporters. “Without you, we wouldn’t have such a great centre.”

PRC board of directors chair Don Copeland noted that the PRC’s success was in part due to the fact that the researchers recognize that “research for research sake is pointless. It must be shared with industry and producers.” Due to Frank Robinson’s work, Copeland says “broiler breeder management has changed throughout the world.”

Dr. Stan Blade of Alberta Innovates Bio Solutions (AlBio) says the PRC has what his group likes to see – a superb connection to the industry, and a great group of researchers. Alberta Egg Producers chair Michael Froese congratulated the PRC on its milestone and 25 years of partnership, and presented the PRC with a glass egg. “As producers we rely on the PRC researchers to tell us about research in plain language, and because of that we see the obvious benefit to us of what they do.”

Robinson says he has had a lot of fun at the PRC and he is very proud to be associated with it. At various meetings in Canada and throughout the world, he could see that the PRC was held up as the “gold standard.” He says about 10 years ago, he had many people ask why the PRC was doing so well, when other research units at universities in Canada were regressing.

He says he told them the following: “We have an industry that clearly supported research for the short-term and long-term. Our industry partners and the feather boards saw the value of knowledge generations and the training of high quality people that would serve the present and future generations. We also have funding organizations and a provincial agriculture department that recognized that collaborative work was better than university empires that were infrastructure heavy.”

“The formation of this centre happened due to people thinking outside the typical boundaries of thought,” he says. “I really hope we can say this in the next 25 years as well.”