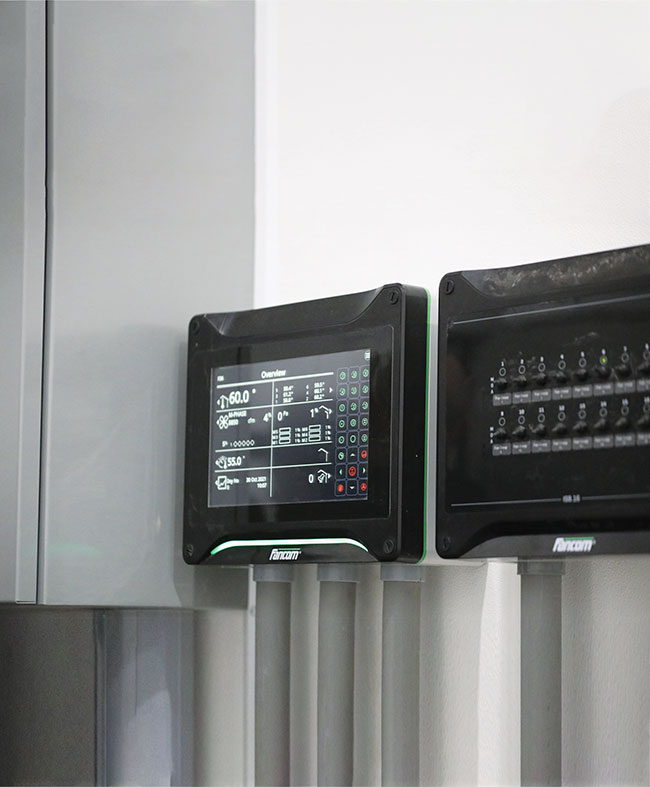 One of the most promising precision technology advancements in recent years has been dashboards that collate data and visually display it in one place for easy analysis. PHOTO CREDIT: Fancom

Increasingly, poultry producers face public pressure to lower their impact on the environment while improving animal welfare. In order to remain competitive, they look to improve efficiency and productivity. While the challenge is a complex one, experts believe precision livestock farming technology could provide solutions.

Dr. Lenny van Erp is a professor of precision livestock farming at the Higher Agricultural School (HAS) in the Netherlands. At a recent Poultry Industry Council meeting, she homed in on the value of information and dashboards. Later, in a follow-up interview, she expanded on the types of technology available and the ways in which some Dutch farmers are using precision livestock tools to improve production and efficiency.

Power of dashboards
On the average poultry farm – broiler, layer, turkey or hatchery – there are plenty of systems that gather information and data. Most of these tools come with proprietary systems that allows producers to track changes on-farm.

Until recently, though, there weren’t any tools that brought that information together.

In the Netherlands, companies like FarmResult aim to change that. The company has created two dashboards – Poultry Result Broilers and Poultry Result Layers – that collate data and visually display it in one place for easy analysis.

Van Erp says dashboards are a good start for producers looking to get into precision livestock farming. “Once you have a dashboard then you can easily take it a step further and do little calculations,” she says. “The feed and water ratio is a very simple calculation.”

On top of feed and water intake data, producers can add and compare information from ventilation, lighting, heaters and humidity controls and air quality sensors. Changes to feed can be logged and compared, as can vaccination records. Using automatic weighing technology, poultry producers can assess productivity but also activity, fitness and overall health.

Producers who want to take it a step further can later invest in camera technology or air quality sensors. While some of the camera options are cost prohibitive, Van Erp says cheaper, top-view models have come to market in recent years, enabling quick assessments of flock activity and distribution.

“Until a couple of years ago, this data was never presented to the farmer – it was somewhere in the computer,” she says. “But in precision livestock farming, I think that a dashboard is really essential.”

A Netherlands-based company, Fancom started out in computerized climate control but later expanded its system to include lighting, feed rations and costs, water monitoring, behaviour monitoring and automatic weighing and egg counting.

“On the climate side, we’ll put in temperature sensors, humidity sensors, CO2 sensors, ammonia sensors all in on the barn,” Thompson explains.

“They take readings all the time and they’re actively monitoring the conditions in the barn.”

The data is then sent back to a central computer, which is programmed to adjust as needed. Modifications are based on pre-programmed parameters.

“Back in the day, if it was it was a humid day outside, you’d have to manually go and adjust for that,” Thompson says.

“Whereas now the computers kind of handle that automatically. So, the problem doesn’t become too bad because you’re tackling it in real time.”

While the system adjusts on its own, should the problem become critical, producers are notified by phone or email. Real-time reactions not only address issues head on before they become big problems, Thompson says, they also cut costs and improve productivity. Heating costs, especially in the middle of a Canadian winter, can be high.

More accurate and better-timed ventilation can limit heat loss and have a significant impact on the producer’s bottom line, Thompson says.

“Especially in broilers, if energy is being used to keep them warm, it’s not being used for them to grow,” he explains.

“And then your birds would underperform.” 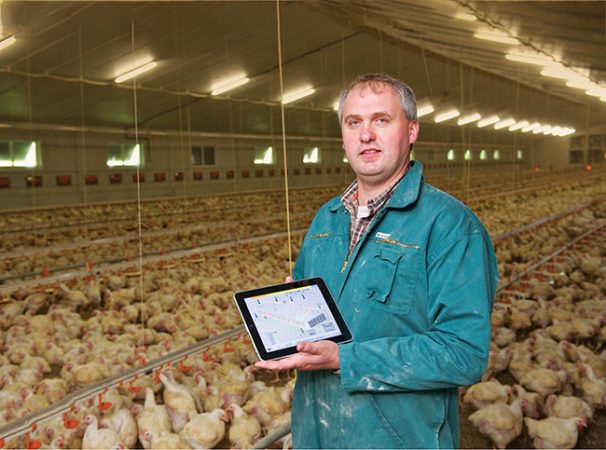 Storytelling
While most precision livestock farming technology improves on-farm efficiency, in some cases, the collected data is being used for storytelling purposes. Marcel Kuijpers of De Kloeke Kip (The Sturdy Chicken) in the Netherlands has adopted blockchain technology on his 250,000-bird broiler operation. While he uses the technology to monitor everything from feed and water intake to on-farm energy use, litter moisture and footpad health to meat quality, he also uses it to engage retail brands, to enhance traceability and in marketing to consumers.

“If something is wrong with one of the components in the feed, we can do traceability in 10 seconds instead of 24 hours,” Kuijpers says.

That traceability comes in handy when marketing to consumers too. De Kloeke Kip doesn’t use antibiotics, which they can prove to consumers or retailers using blockchain technology.

“With blockchain, you can’t manipulate your data,” Kuijpers says.

Using a QR code, De Kloeke Kip provides information to consumers with a short history of the chicken they’ve purchased. They can see when eggs were laid and hatched and where and when the bird was raised.

But his system’s real power lies in being able to provide a precise CO2 footprint per bird. “We think in the future sustainability will be more and more important, and therefore we are focusing on CO2 emissions,” he concludes.

From selling your sustainability story to improving feed conversion ratios to lowering energy costs, there are many reasons to adopt precision farming technology on poultry farms. The only limiting factor is your imagination.

Key takeaways
Here’s a summary of some of the key takeaways on the state of precision livestock farming.