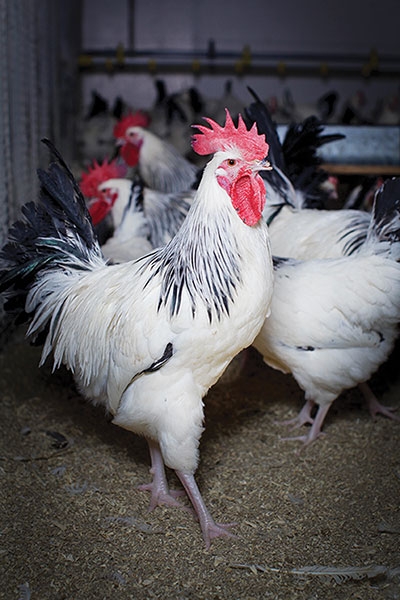 Supporters pay $75 to “adopt” a heritage chicken such as the Light Sussex, and receive eggs on a bi-weekly basis

Heritage chickens are important for breeders and industry to protect valuable genes and traits over the long term. Heritage poultry breeds are breeds that existed prior to the 1950s and represent an important bank of genes for traits like disease resistance, unique egg and meat flavour profiles and increased stress tolerance and vigor. However, many heritage breeds are rare and increasingly threatened with extinction.

The University of Alberta’s Poultry Research Centre (PRC) has held heritage chicken strains since 1986. The rare breeds and random bred strains were partly obtained from the Agriculture Canada Research Station in Ontario and partly from Dr. Crawford’s experimental flocks at the University of Saskatchewan. Dr. Roy Crawford maintained these breeds as an unselected population since 1965, however, when he retired, these breeds found a new home at the PRC in Edmonton.

Like other institutions and organizations, recent budget constraints and physical space have put pressure on the PRC heritage chicken program. “There were more strains earlier on, but some difficult decisions have had to be made along the way due to space and budget concerns,” explains Dr. Valerie Carney, Adjunct Professor, Poultry Research and Extension Specialist, Alberta Agriculture & Rural Development. “Some of the original lines have been transferred to other institutions or eliminated over the past several years. The remaining heritage flocks are valuable and are like an insurance policy for industry,” says Carney. “Our current commercial lines only represent about 50 per cent of the genetic variation, so without these heritage flocks, a lot of variation would be lost. As consumer demands change or new market opportunities open, having access to the range of traits is valuable. One of the most reliable ways of preserving these heritage lines is by keeping live populations. There is research underway with cryopreservation techniques, however the methods are not yet fully reliable and should form only a portion of conservation techniques.”

Because these heritage flocks are costly to maintain and with budget cuts to provincial universities, the PRC flock came under the spotlight. PRC needed to find a creative way to cover the costs of maintaining this flock of 1,500 birds, which were costing about $75,000 per year. PRC received funding from the Alberta Livestock and Meat Agency (ALMA) to assist with a market research and development project to identify opportunities.

“We worked closely with our commercial industry partners to ensure that any strategies developed were in harmony with the commercial markets,” emphasizes Carney. “The egg industry for example has recognized that consumers would like to have a choice in the type of eggs they want to buy and have developed markets to address that choice. We were looking for creative ways to help fund the cost of keeping the birds at the same time as providing value to supporters. Our innovative “Adopt a Heritage Chicken Program” was created to do that.”

Program a Success
In 2013, the Adopt a Heritage Chicken Program was launched to promote the conservation of unique genetic lines of poultry at the University of Alberta. The program’s goal was to develop a community of supporters for the heritage chickens program. Through the five-month pilot, “Adopt a Hen’” program supporters paid $75 to adopt a hen and received local, free-run, nest-laid eggs every other week from the Plymouth Rock, Light Sussex, New Hampshire, White Leghorn and Brown Leghorn flocks. The pilot project, which started with 200 supporters and another 600 on the waiting list, was very successful and has been expanded in 2014.

“We conducted a survey of our supporters to find out the main reasons they were interested in adopting a hen,” explains Carney. “Over 80 per cent said they wanted to support the heritage stocks. Other top reasons were knowing where their eggs came from and supporting locally grown food sources.” The program has expanded in 2014 to 400 supporters, with another 400 on a waiting list. About 80 per cent of the original 200 supporters returned in 2014. The duration of the program has been extended to 10 months. Supporters pay $150 to adopt a hen and they receive a dozen eggs every other week.

“The biggest win for the program is it has allowed us to engage with an audience that we would never likely be able to connect with otherwise,” says Carney. “We have built a relationship with our supporters and have their trust. It has enabled us to engage them in learning about commercial egg and poultry production and to understand what it means to raise chickens. What started as a money recovery project has really turned into a community outreach program.”

For their 2014 PRC annual meeting, PRC expanded the invitation to include the Heritage Chicken program supporters to participate in “the science behind the henhouse doors” day. Carney notes that supporters come to the university regularly to pick up their eggs. However, because of biosecurity requirements, they are not allowed to come into the unit. This raises a lot of questions, so the day was a way to engage with supporters and help them understand how much science goes into the poultry industry. PRC researchers gave presentations and graduate students presented posters. In 2014, a new component was added where supporters were able to buy chicks hatched from the program. In collaboration with Peavey Mart at three locations near Edmonton, 300 chicks were sold to supporters. “The program was a huge success and we expect to continue,” says Carney. “With the whole movement to urban poultry production, this has given us an opportunity to educate people about backyard poultry biosecurity, practical production care and best practices. The chicks had to be pre-ordered and supporters had to agree to the terms and conditions of the program. When they picked up their chicks at the store, researchers and students were there to provide more information and answer questions.”

The PRC Student Club members have also been very involved in the project and are interested in becoming more engaged with the PRC. “One of the things we are considering is to develop ‘student-led agriculture’ where university students can become more actively engaged in managing these breeding programs,” explains Carney. “This would allow students to gain hands-on training with the birds. We hope to move forward on this concept and are working on some funding strategies.”

At the recent Poultry Science Association Annual Meeting in the U.S., Carney gave a presentation on the Adopt a Heritage Chicken program and received a lot of interest from other Canadian and U.S. universities and institutions. “We are working on funding to develop a package that would assist other institutions start a similar program,” explains Carney. “We have put a lot of effort into developing this program with the blessing of our commercial industry and learned a lot of things along the way that would be valuable to others. We believe it can be a sustainable and collaborative strategy to maintain our heritage flocks at the same time as engaging with community and increasing the understanding of our commercial poultry industry.”

For more information on the program, visit: www.heritagechickens.ca