The role of prevention in reducing antibiotic use in broilers. 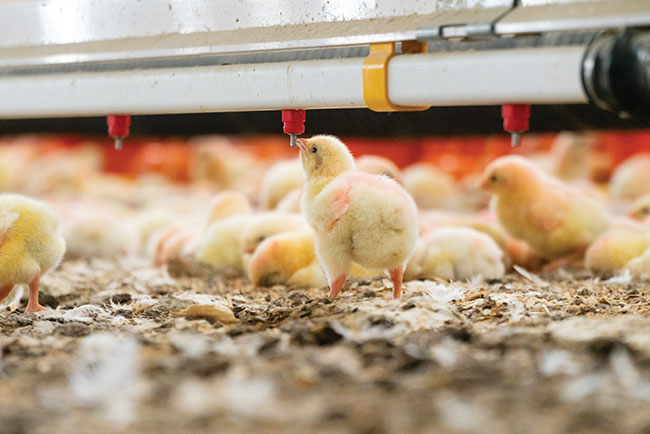 Poultry veterinarians routinely consider judicious use of antibiotic interventions based on proper diagnosis and antibiograms. They should only use these treatments for bacterial infections, as they are ineffective against common viral infections.

In Canada, colibacillosis caused by E. coli in broilers is among the leading causes of high mortality and subsequent antibiotic therapy. These bacteria are part of normal gut flora in birds. The pathogenic strains are in the minority and don’t cause problems in healthy birds.

Even though very pathogenic E. coli strains (APEC) can be a primary cause of concern in certain situations, many outbreaks are secondary in nature and can be established under stressor conditions (e.g., environmental factors, poor brooding temperature).

They can also be secondary to viral infections such as infectious bronchitis (IB), mycoplasma infections or immunosuppressive diseases.

The point is that by improving management practices at the farm level and addressing viral infections via biosecurity and proper vaccination, we can prevent primary or secondary E. coli infections and reduce overall antibiotic treatment.

Infectious bronchitis
This respiratory viral infection can affect broiler flocks at various ages. It can result in higher mortality, inadequate water and feed consumption and performance losses. It can also lead to secondary bacterial infections. When susceptible flocks are affected a few days prior to shipping, it can also cause higher airsacculitis condemnations at the plant.  In recent years, exposure of flocks to the new Delmarva (DMV) 1639 strain of IB in Ontario and Quebec has been one of the main health concerns for producers.

Neither of the vaccines are 100 per cent protective against DMV 1639. However, the goal is for the vaccine strain to compete with the DMV strain and reduce the replication of field virus in affected birds. From this perspective, application of these vaccines can reduce the negative impact of DMV 1639.

It can also be used to lower the negative impact of IB outbreaks in broilers.

Immunosuppression due to IBD (Gumboro)
An underdiagnosed disease that affects broiler flocks in Canada is IBD. We are fortunate that so far there is no sign of very virulent IBD (VVIBD) in Canada, which can result in high mortality and significant performance losses in affected flocks. Having said that, there is plenty of laboratory evidence of subclinical IBD strains, so called variant IBD strains that affect the commercial broiler industry.

Variant strains are immunosuppressive and affect the performance of flocks. In broilers less than two weeks of age, the immunosuppression can be more significant and damage to bursa is permanent. In flocks over 21 days, the impact is temporary, but still can result in elevated FCR, poor weight gain, higher condemnations and even secondary bacterial infections such as colibacillosis (E. coli infection) and bacterial lameness and in some cases subclinical coccidiosis (caused by Eimeria maxima and tenella).

These variant IBD strains don’t cause obvious lesions in birds, other than bursal atrophy, and proper serology at the right age and molecular diagnostics are required for proper diagnosis.

There are wide range of IBD vaccines. However, poultry veterinarians should properly diagnosis and select the right vaccine and age of vaccination to get the best result. When there is high level of contamination of broiler houses with field IBD strains, one important intervention is stepwise cleaning and disinfection (i.e., removal of litter, washing with detergent followed by disinfection) to reduce the load of virus in the barn.

Gut health and coccidiosis
We know that pathogenic strains of E. coli are part of normal gut flora in birds. However, these strains in normal healthy birds are in the minority and don’t cause any problems.

When subclinical gut diseases such as coccidiosis affect birds, it can result in damage to integrity of gut wall and act as a portal of entry for a pathogenic strain of E. coli into the circulatory blood system. This can result in systemic colibacillosis or localized infections such as femoral head necrosis and general lameness. Therefore, proper coccidiosis prevention is an important part of broiler production.

There is one combination product that consists of nicarbazin and narasin.

Based on my experience, the following principles should be considered in a coccidiosis medication program.

Primary E. coli infection
Most acute cases of colibacillosis can occur as a secondary infection in birds.

However, if a given flock is exposed to a large number of avian pathogenic E. coli (APEC) strains, for instance via respiratory route, it is possible to have primary infection with no major predisposing factors and high E. coli related mortality and lameness.

Proper management (such as paying attention to brooding details) and application of live E. coli vaccine is very important to minimize the impact and the need for antibiotic treatment.