With the installation of a processing plant, B.C.’s Rossdown Farms Ltd. is the province’s first family-run fully
integrated operation 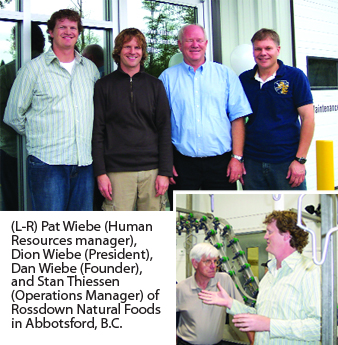 So, when does a poultry processing plant resemble a provincial park? When it's the vision of a family owned and operated fully integrated poultry business with strong ties to the community and industry.

With just a month under their belt, the Wiebe family – dad Dan and sons Patrick and Dion – welcomed politicians, industry reps, guests (and bankers) to the official opening of Rossdown Natural Foods in Abbotsford, Sept. 21.

Discreetly protected by 37 wooded acres south of the Fraser Highway on Bradner Road, the new plant – small by some standards, says Pat – can process up to 12,000 ducks, turkeys or chickens during one shift, 90 per cent of which are sourced from the family’s six farms. Federally inspected, it keeps 40 full-time employees on their toes, and took just over a year to complete.

Set a good half to three quarters of a mile back off the road, the entry driveway winds its way through an older stand of cedar forest.

“It’s great to drive in here to work,” says Pat, “instead of an industrial park where they’re making windows next door.” It is a farm operation after all, he notes.

The plant has its own retention pond, complete with a generator and pump, for fire protection. “The city was going to charge us a fortune, so we built it ourselves,” he said.

Pat says the remote location protects them from prying (suburban) eyes. The acreage is in the agricultural land reserve and he admits the process to re-classify the zoning to allow operation of the plant caused “some anxiety for the Agricultural Land Commission.”

“But we wanted to be open with them on our intentions,” explains Pat, admitting the public hearings did cause some stress.

He credits Dave Dodge’s Oregon-based business for helping outfit the plant. Dodge acquires equipment from mega-processors in the United States that remodel every 10 years or so, and then refurbishes and installs it in smaller scale processors, like Rossdown, providing all the training necessary to keep the production line going.

On the receiving floor, simply designed multi-breed shackles can take turkey, ducks, chickens and even specialty birds like Cornish hens. They employ a manual slaughter that keeps their options open to other markets, like Halal, where each bird is blessed when it is killed.

There’s a wax room for ducks, where the fowl are dipped twice to remove all the tiny pin-feathers, which come off “like a sock,” Pat explains. The room also provides Rossdown an opportunity to kill geese at some point in the future. Their largest duck day to date is 2,000, although he said he had 3,000 birds booked for the next production day.

The evisceration room is where all the “detail” work starts.

“Although we’re considered a fairly modern and automated line,” Pat told his tour, “we still require a good group of labour people.”

Part way down the line, a Canadian Food Inspection Agency (CFIA) inspector assesses the birds. Positioning the CFIA inspector where they do in the process allows them to sell feet to the specialty Asian market as “inspected” meat. An in-house quality inspector makes the final check before the birds enter either water or air chill.

Water chill is far less expensive and a shorter process, notes Pat, but air chill is gaining popularity. There’s a perception, he says, you’re paying for water when the bird has been water chilled. Just the same, 98 per cent of birds are water chilled, and all birds must be kept below 4 C before they’re cut and packed.

The cut and pack room is the last step before the birds go into the cooler or cold storage, which is also on site. Most customers take birds in large totes for further processing, but Rossdown has the ability to cryovac custom orders. Birds are boxed, weighed and labelled, and then head to the cooler. The room is purposely large, Pat says, because they see a time when they may move into more deboning or specialty packaging.

They’re currently operating one shift a day and although the option of adding a second shift is doable, “we’re a long ways from that,” says Pat.

But it’s a 24-hour-a-day operation, nonetheless. The processing crew starts at 6 a.m. When their shift ends at two or three o’clock in the afternoon, the cleaners come in until about 10 p.m. The poultry catchers start their nightly routine at the family farms at 10 and so it goes. They’re currently operating four to five days a week, processing 27 birds a minute. (Some large, automated plants can kill 60.)

It’s just shy of a $10-million investment for the Wiebes and their partner, Stan Thiessen. While they’re far smaller than Lilydale or Hallmark, they’re bigger than a couple of others that round out the half dozen or so poultry processors in the Fraser Valley.

The new plant for Rossdown Farms Ltd. is also the completion of a 100 per cent vertically integrated poultry operation, a vision Dan Wiebe is credited with having some 10 or 12 years ago – sidetracked only slightly by the avian flu crisis a few years back. He started the business with one barn and 5,000 broilers in 1968. Today, they’re producing 300,000 broilers per eight-week cycle and have “more turkey quota than we know what to do with.” The family added their own hatchery about eight years ago, and there’s a family-owned feed mill, as well.

The senior Wiebe is about to retire, but he’s left a legacy the next generation seems only too happy to carry on. n