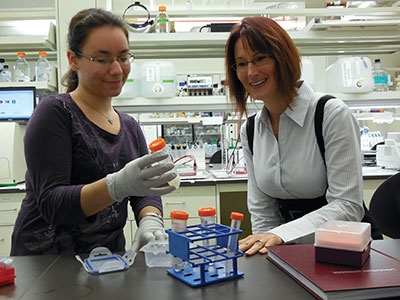 Agricultural disease is one of the biggest hurdles for any farmer, processor or industry to overcome; never mind the damage it causes to the environment and economy of a region. While the implementation of biosecurity measures is key in the control of such diseases, it does not deal directly with the problem.

The Alberta Livestock and Meat Agency Ltd. (ALMA) is working with a team of researchers to create a new vaccine for poultry to help prevent the spread and damage that two pathogens cause to poultry producers – Salmonella and Clostridium perfringens.

Dr. Christine Szymanski, a University of Alberta professor and one of the researchers involved in the project, said that the preferred method of control for these two pathogens would be a vaccine, as it can help reduce the risk of contamination of eggs and meat without the use of antibiotics. This is especially important due to the concerns from both consumers and producers regarding antibiotic resistance.

The researchers decided on Salmonella because of its ability to cause foodborne illnesses in humans, and Clostridium perfringens, which causes necrotic enteritis in broilers in addition to food poisoning in humans.

“While C. perfringens is the most common and financially devastating bacterial disease in commercial flocks, no effective chicken vaccine is commercially available,” said Szymanski. “And salmonella in humans is caused by consumption of contaminated eggs and poultry products, and results in potentially severe gastrointestinal issues.”

MAKING IT STICK
The vaccine research is based on Szymanski’s development of a successful carbohydrate-based poultry vaccine for another common foodborne pathogen, Campylobacter jejuni. This was accomplished through the use of bacterial glycomics, the investigation of sugars (also known as glycans), especially those found on the surface of the bacteria.

According to Szymanski, the sugars on the surface of pathogenic Salmonella and C. perfringens can be presented on the surface of a non-pathogenic bacteria, which means that a vaccine could be used to stimulate an immune response without the use of the deadly strains.

“This means we can create a vaccine from harmless bacterial strains that will help the bird’s immune system identify and destroy the pathogenic strains. In this way, a single vaccine will simulate an immune response in the bird that will protect it from a broad array of Salmonella and C. perfringens strains.”

She added that combining the two vaccines into one would provide an inexpensive vaccine against the two problematic pathogens. In doing so, this could eliminate the need for antibiotics for both diseases.

This is especially important for C. perfringens, Szymanski said, which currently can only be controlled through the addition of antibiotics into the drinking water.

AN IMPORTANT STEP
Glycan-based vaccines are not new, as human glycoconjugate vaccines have been routinely used for less than 20 years with minimal side-effects, and are routinely given to infants. Similarly, no side-effects have been seen with the C. jejuni chicken vaccine, and the live non-pathogenic organisms in the vaccine are only in the system long enough to induce an immune response before being cleared from the chicken entirely.

Dr. Susan Novak, ALMA’s research manager, said, “A glycan-based vaccine would be a transformative advancement for the poultry industry. The use of antibiotics could be reduced if producers are able to give their birds a dual vaccine that boosts the immunity against multiple strains with a single shot. Alberta is leading the world in this area and that is a point of pride for our industry as well as a real competitive edge.”

In addition, Drs. Szymanski and Mario Feldman have spun off a company, VaxAlta Inc. in Edmonton that builds on their studies in bacterial glycomics. They were the first to identify the C. jejuni glycan pathway and show that sugar systems can be mixed and matched to produce novel glycoconjugates. Szymanski and Feldman are now exploiting this expertise toward the development of novel glycoconjugate vaccines for use in agriculture.

“The next step in our research is to optimize the carbohydrate-based vaccine against C. jejuni and create an effective dual vaccine against Salmonella and Clostridium perfringens. Glycoconjugate vaccines against other pathogens found in poultry, cattle and pigs are also in the pipeline,” said Szymanski.