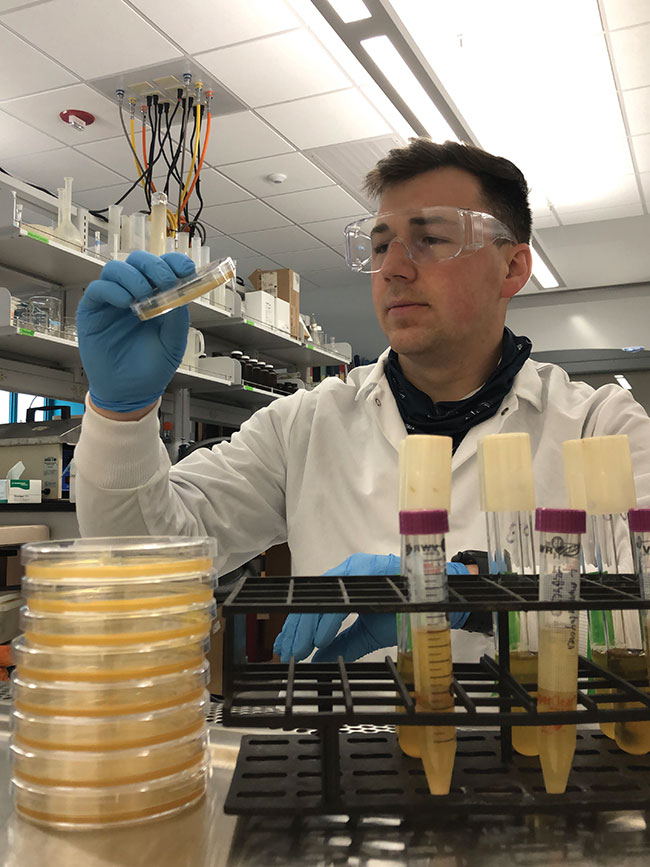 Lead researcher Joshua Cassar observing agar plates in search of microbial growth retrieved from the surface of an egg.

New research shows that pulsed ultraviolet light can be an effective tool to improve the safety of both table and hatching eggs.

Researchers at Penn State University’s College of Agricultural Sciences scaled up the technology and tested it in a simulated setting similar to commercial egg processing environments, achieving very positive results.

Egg decontamination is an essential part of getting table eggs ready for consumption. It’s particularly important for eggs produced in housing systems that include nesting boxes.

Reducing the microbial load on eggs lessens the prevalence of foodborne illness associated with poultry meat and eggs. Notably, it accomplishes this without compromising chick health.

The egg industry currently uses sanitizers and detergents to decontaminate eggs and wash off any physical debris.

Extra layer of protection
“Eggs in floor systems are exposed to a lot of dust, and bacteria seek out the pores of the eggshell and hide in there,” explains Paul Patterson, a Penn State poultry scientist who worked on the project. “Washing and disinfection take care of a lot of that debris, and because washing opens the pores, the pulsed UV light would be an additional step to eliminate potential pathogens from the eggshell.”

He sees the technology as an extra step to ensure an even higher level of food safety for table eggs and provide an additional layer of assurance to consumers about their cleanliness and safety. In the hatching egg industry, clean eggs are particularly important to avoid incubating organisms that could bring disease to a whole group of chicks.

“This could be a substitute in the hatching egg industry for some of the products they currently use to ensure healthy chicks and could help in a transition to antibiotic-free or no antibiotics ever production,” Patterson adds.

Low-intensity ultraviolet light has already been used as an additional antimicrobial step in egg decontamination, but pulsed UV light is more effective. That’s because it delivers a higher intensity of ultraviolet light to the surface of the eggshell, eliminating more pathogens in a shorter amount of time than conventional UV light. 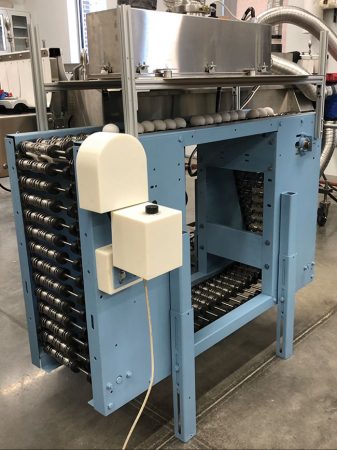 This novel conveyor devised for the experiment was instrumental in achieving acceptable decontamination. As the eggs rotate on their long axis along the way, the entire surface of the eggshell is exposed to the pulsed ultraviolet light energy. PHOTO CREDIT: Joshua Cassar, Penn State.

Study details
To test the efficacy of pulsed UV light, the research team retrofitted a small egg washing unit by mounting a xenon flashlamp overtop of its conveyor. Because the eggs are rotated a full 360 degrees, it provided an ideal environment for UV exposure under the lamp on the entire surface of each egg.

The egg surfaces were treated with non-pathogenic strains of E. coli and Enterococcus faecium and then exposed to the pulsed UV light for 27 seconds, which achieved acceptable decontamination. At three pulses per second, each egg was exposed to nearly 90 pulses; each pulse has a duration of 360 microseconds (one microsecond is one millionth of one second).

“Mounting the light above the spools fits nicely with many table egg washing and sanitation systems,” Patterson says. “It’s a retrofit that’s fairly easily done and is relatively inexpensive – it’s mostly just the cost of the UV pulsed UV lamps.”

The technology could be equally valuable to hatching egg producers. The research team also evaluated the impact of using pulsed UV light on hatching eggs on both embryo and chick growth.

Using the same system, four batches of 125 fertile eggs were treated with the same and greater intensities of pulsed ultraviolet light. The eggs were then transferred into a commercial incubator under normal incubation conditions.

Research takeaways
“Using pulsed ultraviolet light before incubation in a hatchery setting would improve chick health, avoid some of the financial constraints caused by poor chick quality resulting from chicks getting sick from early exposure to microbial pathogens, and potentially would improve the food safety of poultry meat,” concludes graduate student Joshua Cassar, who also worked on the project.

The technology could also be used at breeder barns before eggs are sent to the hatchery.

According to Patterson, the study results mean the technology is now ready for commercialization. It’s a step Penn State has no desire to proceed with, though he’s hopeful that the study results might convince one or more processing equipment manufacturers to move the innovation forward.

The U.S. Department of Agriculture’s National Institute of Food and Agriculture provided partial funding for this research. Hy-Line North America supplied the eggs used in this research, and Xenon Corp., of Wilmington, Mass., provided technical assistance with the pulsed ultraviolet light technology.

Cassar is now pursuing his doctoral studies, continuing to investigate the applications of pulsed ultraviolet light as a food safety intervention.