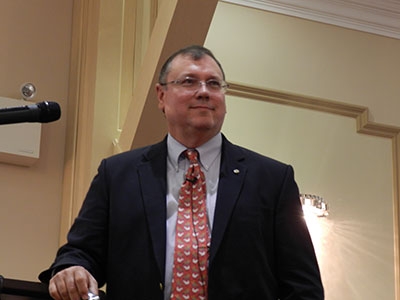 According to Wes Jamieson, the debate goes something like this: Consumers are hypocrites, simply put. Seventy-four per cent of Americans consider animals to be part of the family, according to the American Veterinary Medical Association. To producers, animals are protein production units – they cannot be pets. Producers deal with herd health and flock statistics in aggregate because animals are simply commodities.

Jamieson, associate professor of public relations at Palm Beach Atlantic University in Florida, has been following this dialogue. As he told the gathering at the 2013 Farm and Food Care AGM, “your consumers do not, cannot and will not view animals the same.”

It’s the consumer hypocrite that is the target of activist messaging, said Jamieson. Their core message is always the same: animals are individuals, eating meat is cruel and abnormal, etc., in order to make the audience feel guilty and fuel action. They’re not asking people to change, just give five dollars to help the animals and you will feel better.

“See how brilliant that is?” says Jamieson.

The messages range from “We’re for the animals, what are you for?” to “We’re not against animal agriculture; we’re against animal cruelty.” The activist message has been relentlessly framed for 25 years, and one of the main reasons it works is because target consumers live with animals in their home. That’s why this is such a difficult issue.

Do producers, want to raise animals like pets? You can’t. So what do you say?

What Jamieson has found in his research is that people are tired of feeling guilty, tired of feeling bad about what they eat and tired of being told what to do. Consumers are fed up and ready for messages that make them feel better.

Such as, “Some animals you eat, some animals you love, and that’s okay.” Or simply, “I love meat.” Ninety-four per cent of people in the U.S. eat meat on a regular basis.

You can eat meat without shame, he says. It’s normal.

A successful message needs three components: it has to be simple, relevant and repetitious. Science and economics don’t work because they are too complex. Showing a farm couple with their kids on their beautiful farm property is not relevant – it makes no sense to the everyday experience of your target audience. The message also needs to be repeated over and over again in order to begin to sway consumers to think in those terms.

Their side has discovered how to do that – it is their strategy.

The argument that it will cost more to produce won’t matter when they’re paying thousands for hip surgery on their dog. You’re complaining about two cents per pound difference? It’s not going to work.

SO WHAT ARE YOU GOING TO DO?

You won’t get mileage out of saying, “We care.” That’s an expected minimum – you have to say that.

The second you start to tell your side of the story, the other side will be working diligently to find one video, one story, one bit of evidence, one farm out there that does things the wrong way. So you’re either all in, up and down the food chain, or it’s better that you don’t do it at all.

You have to put out the message that society has the right to treat farm animals differently than pets, or you’re doomed.

It is that simple.

Related
Pushing for Pullet Growers
From the Editor: July-August 2013
It’s All About Trust
U.S. Food industry pushing Congress to thwart mandatory GMO labeling by the end of the year
Editors’ Picks
Digital Edition