Andrew and Jennifer Lovell of New Brunswick and Dominic Drapeau and Célia Neault of Quebec have been named Canada’s Outstanding Young Farmers for 2016. 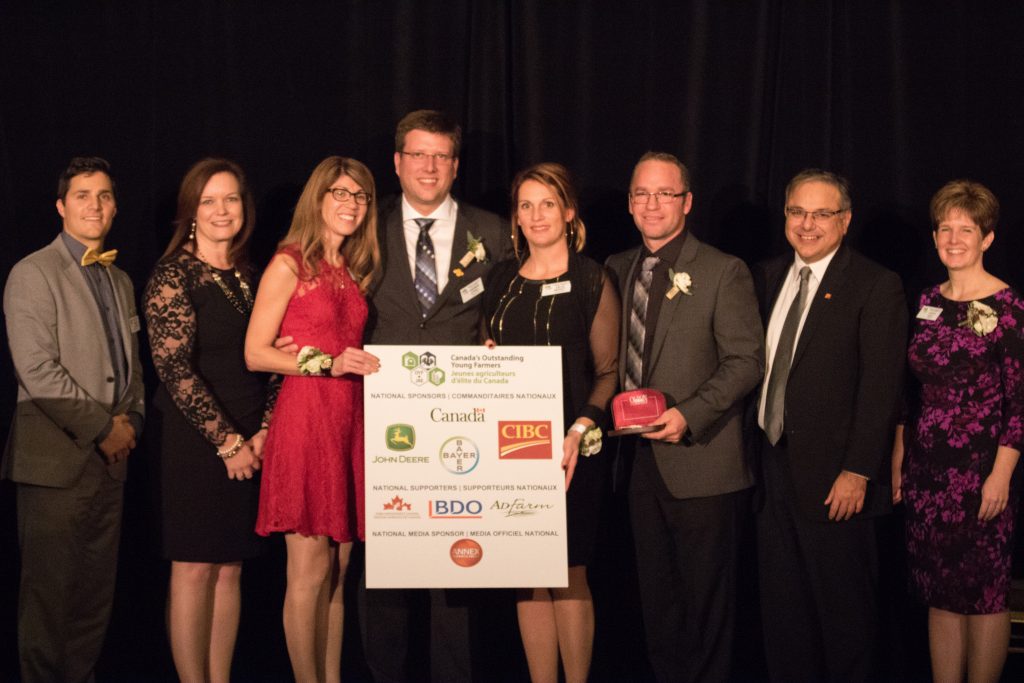 Both families have dreamed of owning their own farm since they were young and were not afraid to make changes and embrace technology along the way. Their entrepreneurial spirits and adaptability has made them successful both on and off the farm.

“All of this year’s regional honourees have shown us their incredible passion for agriculture,” OYF president Luanne Lynn says. “It was extremely difficult for the judges to make their decision, but ultimately our winners stood out for their state-of-the art thinking and commitment to the future of Canadian agriculture.”

The Lovell’s story is different than most because neither of them grew up on a farm. In 2012 they purchased their farm River View Orchards with roots tracing back to 1784, and created a diversified u-pick farm market operation. It wasn’t an easy start as they suffered $100,000 in damage in 2014, but they persevered and adapted their plans until they were able to begin full production again. By offering fence and trellis construction services and building attractions which brought over 1,400 visitors to their farm they were able to carry on with the farm they have always dreamed of.

Drapeau and Neault are third-generation dairy and field crop farmers who are not afraid to make changes and embrace technology. Raised in a farming family, Dominic got involved in the family business at a young age. When he was 16, he was performing artificial insemination on cows and developed his management skills by taking over the herd and feeding responsibilities.  In the barn they use genomic testing on young animals, motion detectors for reproduction, a smart scale on the mixer-feeder and temperature probes close to calving. In the fields, the farm uses a satellite navigation system for levelling, draining, seeding, fertilizing and spraying. With these innovations over the last four years, they have enabled the farm to increase overall yields by five to 10 per cent each year.

“The national event in Niagara Falls this year was a great opportunity to showcase all of the great contributions to Canadian agriculture,” Lynn says. “All of the regional OYF honourees really went outside of the box and pushed the boundaries this year.”

Every year this event brings recognition to outstanding farm couples in Canada between 18 and 39 years of age who have exemplified excellence in their profession while fostering better urban-rural relations. The Lovell’s and Drapeau/Neault were chosen from seven regional finalists, including the following honourees from the other five regions:

Celebrating 36 years, Canada’s Outstanding Young Farmers’ program is an annual competition to recognize farmers that exemplify excellence in their profession and promote the tremendous contribution of agriculture. Open to participants 18 to 39 years of age, making the majority of income from on-farm sources, participants are selected from seven regions across Canada, with two national winners chosen each year. The program is sponsored nationally by CIBC, John Deere, Bayer, and Agriculture and Agri-Food Canada through Growing Forward 2, a federal, provincial, territorial initiative. The national media sponsor is Annex Business Media, and the program is supported nationally by AdFarm, BDO and Farm Management Canada.