New research from around the world is helping producers protect against today’s risks. 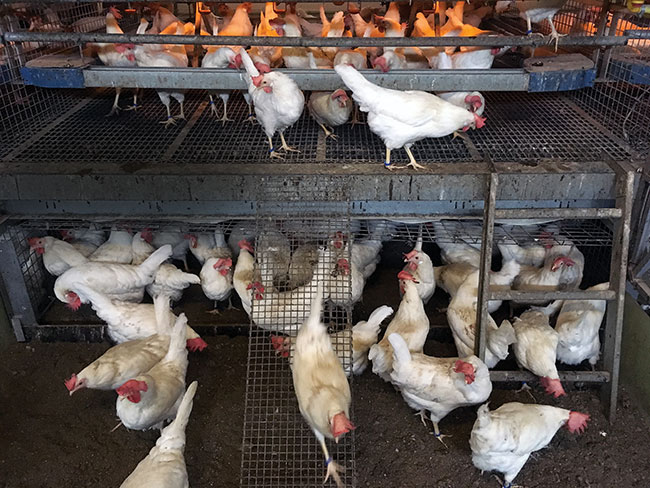 European experts have found biosecurity is even more important in cage-free systems due to the increased risk of diseases spreading in these environments.

We get it – you’re bored of biosecurity stories. Truthfully, reporters are just as bored of writing them. That’s probably because nothing ever changes. The diseases and management tools have been pretty much the same for the past 100 years – that is, until now.

Last year, a group of 10 North Americans, all of whom work in the poultry sector, were invited to participate in a pilot program designed to prepare them for the transition to cage-free egg production.

Funded by the California-based Open Philanthropy Project, the European Layer Training Initiative (ELTI) offered an intensive two-week training program that included a mix of farm visits and lectures in Belgium, The Netherlands, Sweden and Switzerland.

During the course of the tour, participants were invited to visit farms to see firsthand the different management styles of Europe’s aviary farmers. The organizers scheduled farm tours every second day to minimize biosecurity risks.

At one facility, participants were asked to shower in and shower out, as low-path avian influenza had been detected in the flock. The strictness of the protocols surprised some, especially those who had never been asked to shower-in/shower-out before. It was explained to the participants that risks are higher in cage-free facilities – something most Canadian farmers are not used to.

In Sweden, Jeremiasson, who at that time worked for the Swedish Egg Board, gave several talks on biosecurity. While the disease panorama is mainly the same, he said, the difference is the risk of rapid spread in the house. “In caged production you can have, for example, an E. coli problem in some cages without spreading it to the whole flock,” he said. “That is not possible in a non-cage system.”

The European experience
Passed in 1999, a new directive banned conventional battery cages in the EU from January 1, 2012. This ban took place after a 13-year phase-out. Prior to 2012, battery cages had already been banned in Germany, Austria, the Netherlands and Sweden.

Since that time there has been a rise in some infections in Europe, Jeremiasson said, pointing to A. galli as an example.

He recommends vaccinating against coccidiosis in organic or free-range production and mentioned an increased risk for erysipelas and pasteurelosis in free-range flocks.

“In cage-free production you have to walk among the birds and come in direct contact with them,” Jeremiasson said. “Therefore, the risk of bringing pathogens on your clothes to the birds is bigger than in cage production.

“If you have organic or free-range production with outdoor access there are risks with wild birds and other animals,” he added.

To prevent pathogen spread, Jeremiasson said you need a good hygiene barrier that you physically have to pass through. Before entering you should change clothes and shoes, including socks. It is also important to wash your hands.

“The most important route of infection is human beings,” Jeremiasson said. “People visiting the farm and the farmer himself can bring a lot of potentially harmful microorganisms into the animals. It is also important to prevent rodents and wild birds to enter the barn. They can carry many diseases.”

Even in caged production, biosecurity breeches are common.

U.S. producers up their game
According to the Economic Research Service of the United States Department of Agriculture (USDA), more than 50 million chickens and turkeys died of or were destroyed to stop the spread of highly pathogenic avian influenza (HPAI) between December 2014 and June 2015. The birds accounted for about 12 per cent of the U.S. table-egg laying population and eight per cent of the estimated inventory of turkeys grown for meat.

Needless to say, U.S. poultry producers stepped up their biosecurity game in the wake of these losses. Joe Giambrone, professor of poultry science at Auburn University, explains what producers are doing well and where they can still make improvements.

Everything complex follows a set of rules and guidelines, Giambrone explains. The state veterinarian, as well as the USDA, usually set out these rules – typically about 10 in total. The problem is that the USDA sometimes does a poor job of enforcing them.

Despite that, the industry has made great improvements. More American producers have put fences and gates up and use signage to guide guests around farm property. More often now, guests are required to sign in and out when visiting.

When doing so they are asked clear questions about where they’ve been beforehand. Automobiles are now kept outside of the barrier, which helps keep potential pathogens from entering the premises. Those that do enter are disinfected beforehand.

For the most part, Giambrone says, guests are provided with disposable outerwear and footwear. Footbaths are a now a more common sight on farms as well. Inside poultry houses, Giambrone says American farmers have improved litter control, modernized ventilation and revised sanitation and hygiene management.

Giambrone does note, though, that these basic steps are mandatory. If losses occur due to an avian influenza outbreak, for example, and farmers have not kept up with biosecurity protocol they will not be remunerated for their losses.

Some of the risk that cannot be controlled has to do with the fact that some farms are built just one mile apart. Farms, he says, should be at least three to five km apart to avoid windborne transmission.

Comings and goings
Giambrone says there is also concern about whether or not caretakers and family members are following guidelines. This problem is not unique to the United States. According to Al Dam, Provincial Poultry Specialist, Ontario Ministry of Agriculture, Food and Rural Affairs (OMAFRA), it’s common in Canada too.

“We bring the disease on the farm and sometimes the farmer themselves can be the worst culprit,” Dam says.

Dam pointed to a study conducted by Jean-Pierre Vaillancourt that looked at who was going in and out of the poultry barns without adhering to proper biosecurity protocols. Video footage, he says, revealed that all kinds of visitors have access to the barn, including kids, neighbours and salespeople. In some instances, farmers couldn’t even identify the people in the footage.

In the second part of the study, Vaillancourt installed a second hidden camera in the entrance area of the barn, but didn’t tell the farmer it was there.

“Guess who was the one who violated the biosecurity protocols the most?” Dam asks. “It wasn’t the farm manager. It wasn’t people visiting. it was the farmer.”