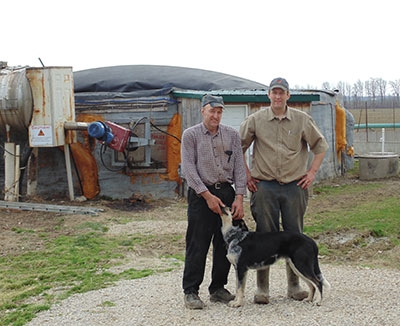 Earl Martin and his son Stewart in front of their anaerobic digester. They developed it to eliminate waste products and create something more valuable.

Efficiency motives Earl Martin. And in his drive to create efficiencies on his beef and poultry farm, he credits his most recent enterprise — installing an on-farm anaerobic biodigester.

Martin first considered installing the biodigester, an innovative approach to solving a problem, as a solution to an on-farm disposal issue. Farming with his two sons, Martin also owns and operates a provincial poultry processing plant, ENS Poultry, outside of Elora, Ont. Since the outbreak of BSE in 2003, costs of disposing offal — or unwanted chicken organs — have skyrocketed, so developing the on-farm biodigester was Martin’s solution to eliminating the expense and recycling the offal. The biodigester also heats the poultry plant, two houses on the farm and generates a profitable revenue stream from hydro.

“It’s a great idea – we take waste products and make a more valuable product,” says Martin, who feeds the biodigester system with poultry offal, cattle manure, waste water from the poultry plant and, based on availability, additional waste products from food manufacturers.

With the ability to generate 100kW of continuous electrical capacity, Martin has been selling power generated from his 500 cubic metre biodigester to the Ontario Power Authority (OPA) for almost three years. He sells the electricity to the OPA and buys back hydro for his own use. “We make a few pennies off every kW we sell,” he says, explaining that despite the additional benefits of the digester, he relies on the hydro revenue stream to pay for the system. Martin expects to have his digester paid off in 10 years, and faster if the system was operating at maximum capacity. The biodigester has only been running an average of 68-70 kW since set up, something that concerns Martin.

Feeding the animal
“Originally, I wanted to get rid of my hydro bill,” says Martin, listing the opportunities of installing an on-farm biodigester. But his expectations of the system grew when he realized how much work it takes to run the boidigester efficiently. Biodigesters need a delicate balance of contents for the bacteria to digest, or break down the products efficiently, creating methane gas. A genset (generator and motor combination) connected to the biodigester converts the methane gas into hydro. Methane gas runs the motor while the generator produces hydro, creating excess heat in the process.

The hydro is sold to the OPA and Martin uses water pipes to carry the heat from the genset system to heat two homes and the farm’s poultry plant. “Feeding the digester is like feeding cattle, it needs a balanced, low-protein diet,” he says. “The difference is cattle will quit eating when they’re full, but the digester never stops, even when it can’t digest something properly, making it sick.”

Martin’s biodigester is “fed” on-farm waste, a mixture that keeps the bacteria healthy and can be easily broken down to produce the desirable gas. Adding additional feed, like natural sugars, can give the bacteria a boost, increasing efficiency and maximizing output. Martin’s biggest headache is sourcing off-farm products to boost the bacteria activity and increase gas and hydro production. Byproducts from food processors are ideal additives to feed the biodigester, but according to Martin, are currently in limited supply.

Without the right balance, or content mixture, the biodigester loses efficiency or kills the bacteria. The vital bacteria can die within 24 hours and take up to 10 days to grow back, resulting in significant downtime and production loss.

On-farm applications
“It’s hard for someone to tell you how to run a biodigester, you have to get a feel for it,” says Martin, explaining that, despite, or because of his challenges keeping the biodigester healthy and fed properly, he’s developed a “feel” for the system. Intuition has become part of Martin’s management skills. Even the texture is important, he explains, because, while the consistency doesn’t yield additional gas, keeping the contents of the biodigester flowable is part of an efficient system. Martin uses wash water from the poultry plant to maintain a desirable consistency of the system’s contents, and is pleased with the efficiency of recycling the water into a new product.

The consistency helps produce another benefit, or byproduct, of the biodigester — digestate. Martin’s biodigester produces, on average, 24 cubic metres of digestate daily. A liquid byproduct, the digestate is high in ammonium-nitrate and used as a valuable fertilizer source on Martin’s 400 acres of corn, soybeans, wheat and hay. “But it’s still important to take soil samples to check the nutrient value of the digestate,” notes Martin. Digestate hasn’t replaced Martin’s purchase of field crop fertilizer completely, but it has helped reduce input costs.

The popularity of biodigesters is growing throughout Ontario. Innovation and efficiency are developing practical on-farm systems like Martin’s biodigester, and the compounded benefits are proving farmers have a lot to gain. In Martin’s case, he needed to find a way to dispose of a waste product and cut his hydro bill. In addition to achieving his initial needs, he’s been able to eliminate his home and on-farm heating bills, produce his own field crop fertilizer and generate a new revenue stream selling hydro. Martin admits it’s a lot of work, but the pay offs continue adding up.

This article is one in a series produced by Farm & Food Care Ontario.