Experts weigh in on the recent outbreak. 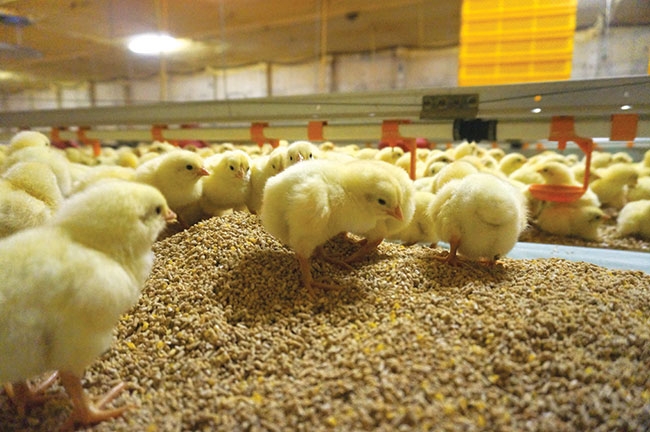 This recent outbreak of reovirus affected roughly 500,000 Ontario birds over a five-week period.

The chicks started showing signs of reovirus at 10 days of age – some lameness, some culls for leg issues and a lot of general lethargy. By 12 days old the birds were becoming significantly worse with 40 to 60 per cent displaying lameness or gait issues. Feed and water consumption was dropping; lethargy was more apparent.

By day 15, feed and water consumption had dropped dramatically. The birds no longer wanted to get up to eat or drink. Runting and stunting was obvious. On day 18 the attending veterinarian decided to depopulate 12,500 birds, a process that was carried out on day 20. By that time most of the birds weighed less than 1.25 kg.

This was the timeline for the first of three Ontario flocks that had to be destroyed due to reovirus, as recounted by Cargill’s Chanelle Taylor. In a webinar hosted by the Poultry Industry Council, the veterinarian reported that two more farms were depopulated during this recent outbreak in August 2017, one with 10,000 birds and another with 30,000 birds, using either CO2 gas stunning or the Zephyr captive bolt dispatch tool.

This recent outbreak of reovirus affected roughly 500,000 Ontario birds over a five-week period, Taylor said. Ten flocks shipped early with mortality ranging from 10 to 30 per cent; by day 14, producers were culling upwards of 200 birds every day in almost all of the affected flocks. Those flocks that did ship had between 500 to 4,000 birds left behind to euthanize after catching due to lameness and runting.

The effects of reovirus
Reovirus is a viral arthritis that causes an inflammation of the leg joints. The disease can be vertically transmitted – from hen to chick – with no signs seen in the broiler hen. It can also be horizontally transmitted from chick-to-chick in the barn after placement. There is, unfortunately, no treatment for this disease.

Clinical signs can be seen as early as 10 days of age, presenting as tendon swelling, gait abnormalities and lameness, splayed legs, wing walking, lethargy, decreased food and water consumption and non-uniformity of growth. Mortality is usually low from the disease itself, usually through culling for leg issues.

The struggle is to get the birds to market weight for processing, Taylor said. Many birds couldn’t get to feed and water because of lameness. Lame birds would sit in the feeders, blocking or intimidating the others from eating.  Some flocks intended for a larger weight category were able to make arrangements for early shipment at the minimum processing size of 1.8 kg.

Birds from the affected flocks tested positive for avian reovirus type variant D, an abnormal strain from what we usually see in Ontario and different from vaccination strains as well.

Viral evolution
This evolution of viral strains is posing a challenge to combatting the disease, said Dr. Jack Rosenberger, who joined the PIC webinar from his office in Newark, Delaware. His company, Aviserve LLC, provides laboratory and consulting services for the poultry industry. Rosenberger reported the isolation of reovirus in broilers and broiler breeder pullets from 16 states.

Viral arthritis is widespread in North America, Rosenberger said, and reovirus variants continue to evolve. Prior to 2011, there was only one serotype known as S1133. From 2011 through 2014, the variant chicken viruses could be grouped into three major serotypes. In 2014, more variant reoviruses were isolated and characterized, bringing the number of serotypes recognized to at least five, with many subtypes and pathotypes (degrees of virulence).

This lies at the root of the issue surrounding available vaccines, since conventional licensed reovirus vaccines don’t generally protect against variant reoviruses. While young birds under two weeks of age are most susceptible to the virus, older birds can be readily infected and transmit the virus without developing viral arthritis. Rosenberger referred to this as “age associated resistance”.

Dealing with the disease
Maple Leaf Foods veterinarian Dr. Kathleen Long suggested that dealing with a flock infected with reovirus depends on the severity of the disease. Euthanizing affected birds is best done early, Long said, and where possible the processing date may be adjusted to compensate for poor growth. Unfortunately, there is little flexibility in processing schedules.

If a large proportion of the birds is affected it may be necessary to euthanize the entire flock. This would be a joint decision among the vet, producer, hatchery and processor based on bird welfare.

Once that decision has been made the challenge then becomes a lack of equipment and trained personnel to perform the depopulation. Ontario farmers are currently relying on the Egg Farmers of Canada to support mass depopulation with their CO2 gassing equipment. Long said the industry is currently discussing a unified approach on this issue among the feather boards.

“Proper biosecurity is very important,” Long emphasized. Reoviruses are extremely hardy. Once the flock has left the barn, it is necessary to remove contaminated material and use a disinfectant that is labeled for reovirus. Combination products containing quaternary ammonium compounds plus aldehyde are best; Virkon and three per cent formalin are not considered to be effective.

Long stressed the need for biosecurity between infected barns and other barns, advising to not spread used litter near other poultry barns. Both shower and change after working with an infected flock or service infected flocks at the end of the day; remove dead birds promptly and remove litter away from other flocks.

Many companies are using autogenous vaccines to control the variants, which the dictionary defines as “a vaccine prepared from cultures of microorganisms obtained from an individual and then used to immunize that same individual against further spread and progress of the same microorganisms.” Going forward, Long says that autogenous vaccines are not being used in Ontario because the issue has not yet been clearly demonstrated in domestic broiler breeders. At present, the source of infection has been focused on U.S. sources.

“We are preparing by characterizing isolates so that, if an autogenous vaccine becomes necessary, we can move quickly,” Long said. However, autogenous vaccines are not a “magic bullet” – they can drive the emergence of new mutations. Live vaccines are not recommended because there is some evidence that commercial live vaccine can worsen the response of birds to the disease.

Long recommends focusing on surveillance for clinical cases of the disease with PCR testing and genotyping where reovirus is suspected.

Meanwhile, the Industry Broiler Health (IBH) Working Group, led by Maple Lodge Farms veterinarian Rachel Ouckama, has outlined a focused reovirus project. It will include a financial impact study, enhanced surveillance, a communication plan and a comprehensive evaluation of the suitability of autogenous vaccine development.