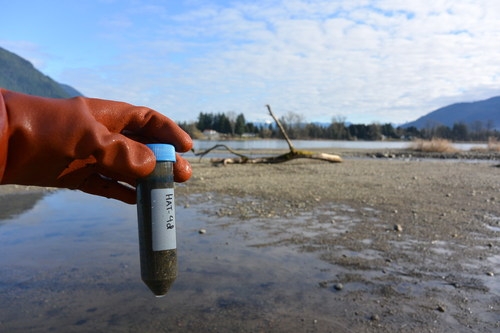 In 2014/2015 an outbreak of highly pathogenic Avian Influenza (AI) struck British Columbia. A total of 13 poultry farms were affected and approximately 240,000 birds died or were destroyed to control the outbreak.

In addition, the disease was detected in the U.S. where more than 48 million birds were lost and the outbreak was estimated to have cost US$3.3 billion and resulted in shortages and price increases for certain poultry products.

Wild waterfowl are known to be the reservoir for AI, and although wild bird AI surveillance programs were already in place in Canada and the U.S., it was limited to collecting and testing individual wild birds.

To improve the surveillance to include environmental monitoring, in 2015 the BC Ministry of Agriculture, BC Centre for Disease Control Public Health Laboratory, and University of British Columbia joined forces to develop a new approach – a genomics-based test that identifies and characterizes AI viruses (AIV) in wetland sediments.

This work, funded in part by Genome British Columbia (Genome BC) and led by Drs. Chelsea Himsworth, Jane Pritchard, William Hsiao, Natalie Prystajecky, and Agatha Jassem, successfully demonstrated that this novel approach worked, as AIV was detected in a significant proportion of sediment samples, compared to less than one percent rate of detection in the current Canadian national wild bird AI surveillance program.

Additionally, the outbreak virus was found in wetlands throughout the Fraser Valley, information that could have been used to mitigate the outbreak had this technology been available.

To further evaluate this novel surveillance approach, a new project, Genomic Analysis of Wetland Sediment as a Tool for Avian Influenza Surveillance and Prevention, represents a combined investment of over $2.5 million from funders and delivery partners including Genome BC, the BC Ministry of Agriculture, the Canadian Food Inspection Agency (CFIA), Agriculture and Agri-Food Canada, Investment Agriculture Foundation of BC, and the Sustainable Poultry Farming Group.

This phase follows on from previous work and is looking at what steps are required to move the technology from a successful proof-of-concept initiative to implementation. This includes scientific validation of technology, as well as its incorporation into Provincial and National Wild Waterfowl AI Surveillance Programs. It is anticipated that this innovative approach will be adopted nationally and internationally for surveillance of AI and/or other diseases associated with wildlife.

“This investment allows Dr. Himsworth and the team to refine and validate the AI sediment surveillance with genomics technologies, methodology and field approach,” says Dr. Catalina Lopez-Correa, chief scientific officer and vice president, sectors, at Genome BC. “Most importantly it allows for the identification of the optimal combination of AI surveillance techniques for maximum efficiency and efficacy.”