Byproducts from the shellfish could offer opportunities

Michelle Daniel’s quest for alternative ingredients to harden eggshells has arrived at an unanticipated destination. 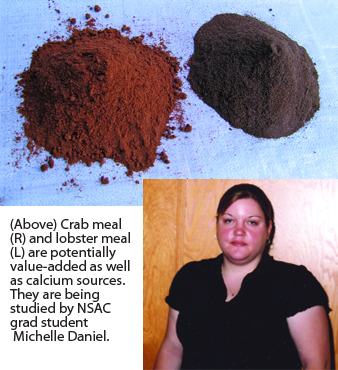 Michelle Daniel’s quest for alternative ingredients to harden eggshells has arrived at an unanticipated destination.

In 2005 the Nova Scotia Agricultural College (NSAC) graduate student started searching for alternatives to the products currently used, powdered limestone, or a compound of limestone and oyster shell. She felt a search for a calcium alternative was justified because oyster shell is three times as expensive as limestone as a shell-hardening agent.

The solubility trials showed these by-products, currently considered as waste, have a higher calcium content than crab and lobster meal and many of these shells are also comparable to oyster shell.  From these results, Daniel says that “further production trials would be useful to assess their full potential as a calcium source during the laying cycle.”

Although relatively low in calcium, crab and lobster are high in protein and so she believes they would be more useful as a protein and antioxidant source, in addition to  providing calcium.

She says she looked to shellfish processing because “previous research has mainly focused on ruminants and little about the effect of crustacean meals in other species such as poultry. Our main objective was to look at crab and lobster meal as feed ingredients through a 32-week production trial with laying hens."

Daniel evaluated the effectiveness of crab and lobster meal by measuring its effects on productive performance and egg quality, particularly the eggs’ composition and structural integrity and the hens’ utilization of calcium.
She got the meal from St. Laurent Gulf Products in Caraquet, N.B., one of the few seafood companies in the Maritimes that processes and packages shell byproducts and leftover meat remnants as meal for animal diets.
Daniel fed six diets to the laying hens in the NSAC poultry barns, a regular diet of oyster shell and limestone to one control group of hens. Five additional groups of hens were fed one of five diets – supplemented either with crab or lobster meals, or a mixture of both.

She found no quality difference between the control and test diets in a specific gravity test to ascertain eggshell quality. She, therefore, has concluded crab and lobster meals are good alternative calcium sources.

“The red pigment is also a known anti-oxidant. So, it would be interesting to test the levels to see if these anti-oxidant levels were transferred to the egg yolk. There could be an opportunity to produce value-added eggs.”

She thought the astaxanthin, which imparts a reddish tinge to the egg yolks, could be used as a marketing advantage as it would have potential health benefits for consumers.

As she was completing her lab work for her Masters thesis, the new Atlantic Poultry Research Centre (APRC) on the NSAC campus opened. “Some of my results are already being formulated into new projects that will benefit from this facility,” says Daniel.

APRC dietary research will continue on crab and lobster shell byproducts, which her in-vitro solubility trials examined and “currently they are working on clams and blue mussels,” she said.

Bones were also collected from the test hens as part of her research to determine their bone breaking strength and calcium contents, “and we plan to measure the anti-oxidant level in the yolk. That is one of my last projects to complete,” she says.

She is now writing her thesis which she intends to complete and defend by the end of this year.

In 2004 Daniel graduated from the University of Guelph with a bachelor’s degree in Animal Sciences. She then returned to her home province of Nova Scotia to work for a year. She carried on with her undergraduate area of study in monogastric diets in her graduate research at the NSAC, choosing the college because of its “personable environment.”

Daniel praised the NSAC. “Since I’ve arrived at the NSAC, I’ve had the opportunity to attend various conferences within Canada where I was able to interact with the industry and communicate my research. I was awarded second place in the poster presentations in the graduate student research presentation at the annual meeting of the Canadian Society of Animal Science held in Halifax in August, 2006.”

The Graduate Research Training Initiative Scholarship funded her research under the federal-provincial Agriculture Policy Framework. The scholarship program’s purpose is to support NSAC graduate students who will benefit the Nova Scotia agriculture and agri-food industry by building a professional capacity to serve the industry’s future requirements.

For herself, Daniel would like to remain in Atlantic Canada. She says her goals are “to apply my nutrition expertise in the feed industry and continue research in the area of specialty ingredients for improved productivity." n