Reducing the hours of light
provided in poultry barns may seem counter-intuitive, but three years
of detailed research at the University of Saskatchewan Poultry Centre
concludes it’s something producers should consider very seriously. 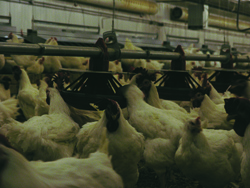 Reducing the hours of light provided in poultry barns may seem counter-intuitive, but three years of detailed research at the University of Saskatchewan Poultry Centre concludes it’s something producers should consider very seriously.

PhD candidate Karen Schwean-Lardner says, “A great deal of research was conducted in the 1970s and ’80s, and much of it showed if the lights were kept on in the barn for almost the entire 24-hour cycle, broilers will eat more and hence grow faster. However, there are a number of reasons why those research results needed to be revisited.”

One of those reasons centres around the fact that today’s broiler is a very different bird than the broiler used in that era. Schwean-Lardner says, “Today’s birds grow faster. There also has been extensive selection against leg disease by some breeding companies and towards various other health factors.”

In addition, Schwean-Lardner says research conducted 30 to 40 years ago often didn’t include measuring animal welfare among its main objectives, but her research does. She and her colleagues had noticed over the past few decades that broilers have seemingly become increasingly listless, not moving around as much as their predecessors. This, combined with things like increased culling from leg defects, “all added up to something perhaps not being right with the use of more light,” she says.

Therefore, three years ago Schwean-Lardner set to work with the assistance of graduate studies advisor Professor Hank Classen (department head of the University of Saskatchewan’s Animal and Poultry Science division) and Bryan Fancher (vice-president of Global Technical Operations, Aviagen) to tease out the exact effects of light on a large number of production and animal welfare parameters.
Schwean-Lardner conducted repeated experiments using four lighting programs: 23L:1D (23 hours of light and one hour of darkness), 20L:4D, 17L:7D and 14L:10D, with darkness given in a single period at the same time each day. The trials were conducted on a large number of Ross x Ross 308, and in some cases, Ross x Ross 708 broilers using various market age groups. Schwean-Lardner says “The results have been consistent across the experiments, and have shown that exposure to darkness has clear and powerful impacts.”

Whether birds are marketed at 31, 38 or 48-49 days of age, the researchers found that using a near constant lighting program (23L:1D) never achieved the maximum growth rate. “Where the growth curve actually peaks depends on the age that birds are marketed,” says Schwean-Lardner. “When marketed at a younger age (31d or 38d), using 20L:4D results in maximum body weight, with the near-constant program results being similar to 17L:7D. However, the growth curve shifts when birds are grown to 48-49d, with maximum growth being similar between 17L:7D and 20L:4D.

The researchers found the relationship between feed efficiency and darkness exposure to be generally linear. That is, the more darkness that the birds are exposed to, the better feed is converted to growth. Schwean-Lardner says, “Even though birds on 20L:4D grow faster than those on 23L:1D, the feed efficiency is similar at these high light levels. At 20 hours of light per day, birds are heavier and have the same efficiency of feed utilization, so the added light isn’t providing any benefit.”

Like feed efficiency, mortality is also improved with increasing exposure to darkness. “At the upper end of the lighting regime, there was often a sharp increase in mortality levels with the use of 23L:1D compared to 20L, 17L and 14L. For example, birds marketed at 38 days (weighing approximately 2.2 kg) had mortality levels of 3.33% for 14L, 3.74% for those under 17L, 4.97% for those under 20L, and a whopping increase to 6.11% when a near-constant photoperiod was used.

The research found that as birds are kept to larger body weights, the importance of darkness exposure is even greater. The majority of these differences appear to arise from disease such as Sudden Death Syndrome, and culling for leg deformities.

“The more darkness that is added to a photoperiod, the fewer birds in a flock will have symptoms of leg weakness, which is important for both welfare and economic reasons,” says Schwean-Lardner. “We know that birds experience pain when they have a moderate to severe leg weakness and they often have difficulty moving to feeders and waterers. As a result, these birds are smaller than the majority of the flock, which can lead to culling or mortality in the barn, as well as downgrading at slaughter.”

Leg weakness in a flock can be estimated with the use of gait score analysis, which involves walking a large number of individual birds and scoring their walking ability. A higher score means that leg weakness is more severe. “Average gait score decreased consistently with each degree of darkness in our experiments,” says Schwean-Lardner. “Once again, the highest level of concern arose with birds raised on 23L:1D. This is consistent with cull levels due to leg weakness.”

Carcass yield is the one production variable that makes a longer day advantageous. “Carcass weight, as a percentage of live weight, decreases as birds are exposed to more darkness,” Schwean-Lardner says. “Breast muscle proportion also declines with as much as 1% decline between 23L:1D and 14L:10D. This represents a large economic impact.”

In terms of measuring activity related to animal welfare, such as walking, running, dustbathing, leg stretching and foraging, cameras with infrared capabilities reported what happened during light and dark on a continual basis.

For both 28- and 43-day market age broilers, Schwean-Lardner found that activity (moving around) peaked at 17L, as did walking, feeding, dustbathing, leg stretching and foraging. Some other behaviours peaked at 14L. Overall, she says, “The program with 23L:1D results in reduction in exercise, exploratory behaviours, nutritive behaviours, comfort behaviours and play behaviours. In terms of walking and running, we saw zero of these behaviours. Leg stretching was almost gone, feeding and foraging is reduced and dustbathing of the 43-day market age birds was nonexistent.”

Schwean-Lardner says the reduction or absence of these normal behaviours could be due to sleep deprivation: “Our hypothesis is that when birds are exposed to 23 hours of light, they are sleep deprived in terms of not enough sleep and poor quality sleep.” She points to a great deal of research showing normal production levels of melatonin (a hormone/antioxidant associated with many important body functions) is dependent on exposure to substantial periods of darkness. “At high levels of light exposure,” Schwean-Lardner says, “you don’t see normal production peaks of melatonin at night in animals.”

When all the data is combined, “We can see that lighting programs have the potential to play a significant role in broiler management,” says Schwean-Lardner. “We’ve found that there is no perfect lighting program that will maximize growth, meat yield and animal welfare.”

However,” she concludes, “we have found repeatedly that near-constant lighting programs result in lower market weights, poorer feed efficiency, higher mortality and more culls due to leg weakness issues as compared to lighting programs with a greater proportion of darkness. Therefore, they are not recommended.” She adds “An interest in the welfare of the birds alone should require us not to use a constant or near-constant program.”

Schwean-Lardner concludes, “While adding darkness does reduce the proportion of valuable breast muscle, we also know that the improvements we get in feed efficiency with exposure to darkness are substantial, and may outweigh the breast meat yield issue.” In addition, producers using less light each night will have the added bonus of substantial savings on their electricity bills.

For more information on this research, Karen Schwean-Lardner can be contacted at:   Karen.schwean@usask.ca, tel: 306-966-2492.