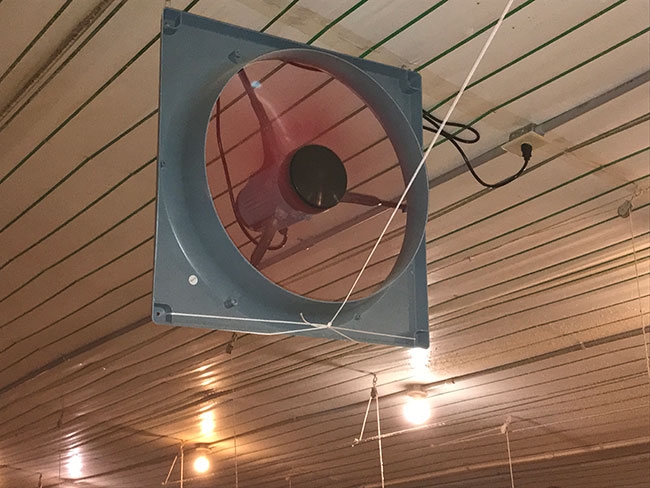 University of Georgia’s Brian Fairchild is applying for a research grant to see if higher volume circulation fans can be used to dry out floors and remove excess moisture from the air. PHOTO CREDIT: Big Dutchman

As the elimination of the preventative use of antimicrobials in poultry production fast approaches, it’s time to take a closer look at ways to prevent stress and illness in the barn. One approach is by providing the optimum environment for the birds – proper ventilation is a key component of that environment.

When it comes to broiler production, it’s all about providing the optimum environment for the birds, ventilation expert Brian Fairchild explains. Fairchild is a professor of poultry science at the University of Georgia.

“What you’re trying to do in the simplest terms is you’re just trying to prevent stress,” Fairchild says. “When you go into a program where you’re not going to use any type of products to help with gut health or to give those birds a little bit of help fending off various parasitic organisms such as coccidiosis or necrotic enteritis, your environmental control is really going to be your first line of defence.”

As producers move away from the preventative use of antimicrobials, Fairchild says they will likely rely more on vaccinations,
as well as probiotic and prebiotic treatments that help build and maintain gut health. The environment the birds are kept in is just as important to maintain, he adds. “You want to try to make it as inhospitable to organisms as possible and a lot of that’s just moisture control,” he says.

In housing, there are several sources of moisture. The first is the watering system itself. “They’re designed to minimize water wastage, but even on the best managed water line, when those birds hit those drinkers not all of it goes in their beaks,” Fairchild explains.

To make matters more complicated, birds only retain 20 per cent of what they drink. The other 80 per cent is either excreted or lost to the environment through respiration. “It’s that water that you really need to get rid of to make sure we’re ventilating adequately to remove that moisture,” Fairchild says.

He adds that producers who move to antibiotic-free programs tend to see wetter houses. “The manure’s got a little bit higher moisture content to it, so you’ve got to be aggressive with your ventilation to keep that moisture out,” he says. “That’s why we feel like we should be trying maintain a relative humidity between 40 and 60 per cent.”

Currently, Fairchild is applying for a research grant to see if circulation fans can be used to dry out floors and remove excess moisture from the air. “Circulation fans are not new,” he says. “We traditionally put them in houses to help break up that temperature stratification from ceiling to floor, and to move air from warmer parts of the house to cooler parts of the house.”

The plan, he explains, is to look at how higher volume circulation fans can be used to keep relative humidity between 40 and 60 per cent. “We’re going to be evaluating coccidiosis sporulation rates. We’re going to look at litter moisture. We’re going to look at footpad dermatitis, which is an animal welfare indicator. And then we’ll look at scoring the system,” Fairchild concludes. “We’ll see where it leads from there.”

University of Georgia’s Brian Fairchild is applying for a research grant to see if higher volume circulation fans can be used to dry out floors and remove excess moisture from the air.

Building a new barn? Do your homework
Mike Czarick, a poultry science specialist from the University of Georgia, cautions Canadian producers to really do their homework before building new barns. Czarick says U.S. producers are more knowledgeable when it comes to building new housing, simply because they operate in an integrated system. “Most of our poultry companies in the U.S. are very knowledgeable on how to design what’s coming down the road because they’re always building new houses,” Czarick explains.

“The challenge I’ve seen in Canada is that each grower is essentially making their own decision,” he continues. “And since they only build a house every 10 or 20 years, they don’t stay up on things. As a result, they rely too much on other people, especially equipment people, to say what they should build.

“I’ve gone to a number of farms in Canada where people are building brand-new 30-year-old houses,” Czarick says. He suggests that instead of relying on equipment dealers, producers look to universities and extension programs, both in Canada and the U.S. A good resource, he says, is the University of Georgia website poultryventilation.com.

“Get feedback from other people once you’ve come up with a design of what you think you’re going to do,” he recommends. “Look at the advantages and disadvantages before you make that jump.”

Kevin Thompson, eastern and central Ontario territory manager for Weeden Environments, knows the challenge of switching to antibiotic-free production well, as his family broiler operation converted in 2011. “We in Ontario are actually at a pivotal time in our industry, particularly in broilers,” Thompson says. “It is entirely possible that we will lose all antibiotics around 2020.

“It’s relevant to this conversation because antibiotics are really quite helpful in mitigating the effects of stress on birds,” he continues. “A stressed bird – their immune system functions less optimally than a bird that’s not stressed.”

Thompson is particularly concerned about introducing new technology that could be more hype than help. What matters now, he says, is creating an environment that minimizes stress in birds. Producers should compare technology, he says, to find what is most fitting for their farm.

“Farmers need to keep that paradigm front and centre in their mind about evaluating any new technology,” he says. “If they’re going to buy a technology because it makes their life easier, that’s okay, but that needs to be a conscious decision.

“They have to be aware of the trade-offs they might be making because the decisions that cost them a couple points of feed conversion here and there over the last few years – those are going to become flock health decisions,” he continues.

“The financial and bird welfare impact of those decisions are going to change as antibiotics are used less and less,” Thompson concludes. “I feel quite strongly about that.”