Innovations for the progressive poultry producer. 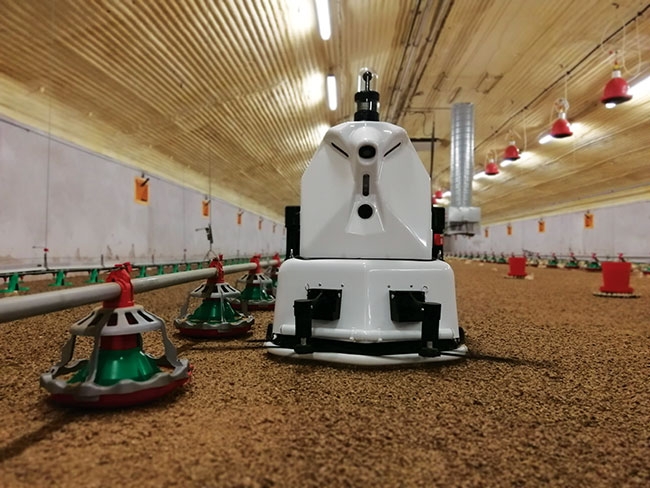 In the past decade, robotic solutions have found a home in the agricultural sector. Their uptake shouldn’t surprise anyone; robots are perfect for those repetitive and time-consuming tasks producers would prefer to leave behind.

They not only take on unwanted tasks without complaint, but they also allow producers to improve overall production by freeing up the time needed to address bigger and more complicated tasks. They’re being used to improve farmers’ working conditions, and to gather and analyze data that will help increase productivity and profitability. Here are some of the robotic solutions from around the world.

Poultry Safe is equipped with a second module called the Scarifier, which also has the ability to work as a standalone robot. The Scarifier is designed to aerate litter in presence of poultry. It is capable of dealing with all types of substrates, turning and ventilating litter to prevent the onset of aspergillosis (a disease caused by Aspergillus fungus), pododermatisis (inflammation of the foot pads) and hock and breast injuries. Regular litter aeration is also known to inhibit the fermentation process in soil and dramatically reduce the level of ammonia in barns.

France-based company Tibot Technologies designed a similar robot for aerating litter. The Curiosity runs along the poultry house floor, running prongs through the litter to keep it aerated. In doing this, it prevents moisture from accumulating and ammonia levels down.

The Curiosity robot runs on lithium battery that lasts for 10 hours. It can be programed to work all over the house, has six speeds and has a four-wheel drive system, making it possible to handle varying terrain in the barn. Although the robot is still in development, the company says it will be commercially available in the spring of 2019 for a cost of about $10,000.

In order to ensure thorough cleaning, the robot is equipped with three washing devices. A directional ramp mounted on an articulated arm and equipped with five rotating nozzles that can reach 4.5 metres high make it easy to clean ceilings and walls. Lavicole also has a washing system designed to clean feeders, a manual high-pressure cleaning lance and a foam gun to apply detergent. The French company Rabaud designed Lavicole.

Data-collecting tools
Have you ever wondered what your broilers are up to when you’re not around?  Is their activity healthy? And if not, how can you make sure you address the issue as quickly as possible? Dutch company Fancom has a solution to address these questions and more.

EyeNamic is not actually a robot, but a behaviour monitor that captures the movement and activity of animals, alerting farmers to problems that could become welfare issues, like improper distribution, crowding, feed and water intake and piling, explains Fancam area sales manager Daan Berkers.

“It’s your third eye in the house,” Berkers says. Farmers find it important to know, for example, why birds are crowding in one area, but not going to another, he explains. Maybe the litter is too wet.Maybe the ventilation isn’t working properly. Or maybe the water line has shut off. Whatever the problem, being able to monitor from a distance at all times allows farmers to quickly respond to abnormal behaviour.

Another monitor, ChickenBoy, is a lightweight device that travels slowly (10 cm/second) on rails overtop of the flock, gathering three datasets as it goes. It collects information on ambient conditions, welfare and health, and watches over installations.

As ChickenBoy moves along the rails, it gathers data on climate conditions, including humidity, temperature, airspeed, and carbon dioxide levels. For now, it does not come equipped with an ammonia sensor, but the Spanish company Faromatics, is looking for a partner, says Daniel Rosés, company co-founder and senior partner.

ChickenBoy also takes thermographic images that can distinguish between chickens that are dead or alive. What’s more, it assesses dropping colour, alerting the farmer when it is off. Some thermographic imaging tools even alert famers when flock health status changes. By looking at the colour you can see which ones are not well and which ones are healthy. “Farmers can predict disease two to three days earlier through excrement analysis,” Rosés says.

Although the cost is not yet established for Canadian buyers, Rosés says it costs European clients around €15,000 for the device.

Task-oriented robots
In open aviary systems, training hens to lay eggs in nesting boxes can be a difficult task. For farmers, it means regularly walking through barns and manually moving birds to deter them from laying on the floor. It’s a time-consuming job, and one that farmers can now pass on to a robot.

Spoutnic, designed by Tibot Technologies, has been designed to move around the barn in random patterns. As it travels, it gently forces hens to keep moving, which keeps them from laying eggs on the floor.

Reducing the number of eggs on the floor reduces the amount of time farmers have to spend stooped over, picking up eggs. Lionel Planquette, Tibot’s technical manager, says internal studies show that Spoutnic helps increase feed consumption, which he says leads to increased growth of 300 grams per bird. Barns where Spoutnic works also show a three per cent decrease in mortality.

If Spoutnic isn’t available, poultry farmers could always employ a poultry-bot to collect floor eggs. Designed by Wageningen University in the Netherlands, the robot eliminates the one to two hours that farmers spend collecting eggs in cage-free housing systems. Collecting eggs may be its main task, but this robot can also track data, like humidity and temperature, and keeps an eye out for sick and dead birds.

The robot drew a lot of curious bystanders, some of whom were concerned about what its presence meant for the farmer. “We don’t want to take the farmer out of the barn,” Inateco’s Lorris Miglioretti says reassuringly. “We just don’t want him to take care of this task.”

“While the bedding is being done, he can be inside looking after the animals, creating this bond between the farmer and the animal,” he concludes.

Much like ChickenBoy, Sentinel Robot moves around the barn as needed. As it goes, it collects data, including temperature and humidity, as well as CO2 and ammonia levels.

For the moment, Sentinel Robot works best combined with Dassau electric mobile straw chopper technology. However, the company does plan to make the technology available to other companies as well. There are already Sentinel Robots working in barns in Europe.