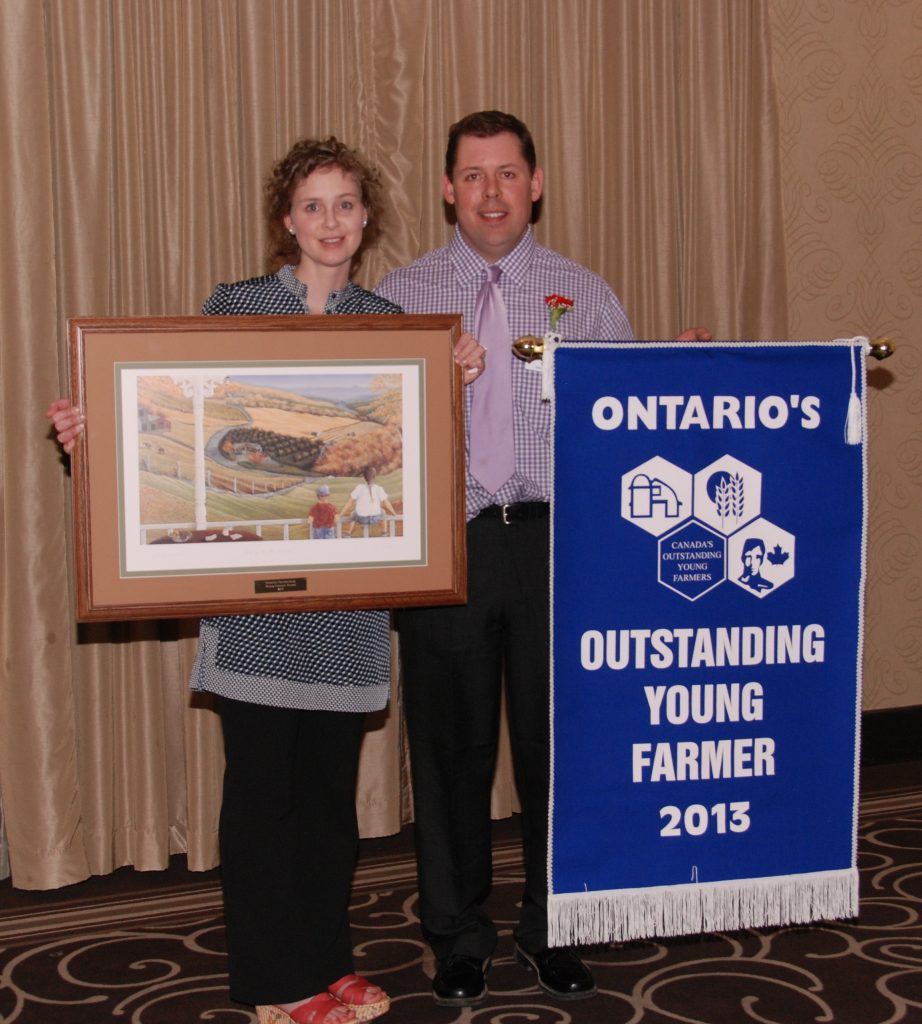 The Thatchers of Rockwood, Ontario have been named as Ontario's 2013 Outstanding Young Farmers. OOYF.

Apr. 3, 2013, Guelph, ON – “Raising animals and livestock requires time, patience and a true commitment to the process, with an end result being our best quality product.”

That sums up the commitment Dana and Adam Thatcher, of Thatchers’ Farms in Rockwood have for their farm operation. The Thatchers received the top honour at the provincial awards ceremony held in Guelph on March 26. Winners of the award are chosen based on career progress, environmental and safety practices, crop and livestock production history, financial and management practices, and contributions to society.

The Thatchers were chosen from a group of farmers including Mark and Sandi Brock (Shepherd Creek Farms, Staffa), Brianne and Chris Brown (Beslea Farms, Yarker), Deb and Ian McGregor(McGregor’s Produce, Braeside), Curtis and Heidi Fielding (Fielding Estates Winery, Beamsville) and  Collin and Tanya Walker (Walkhavern Farms, Stayner). For information on all of the finalists, visit the OOYF website at www.oyfontario.ca.

The judges, Philip Lynn (OOYF winner in 2005), Ross Carson (FCC) and Rob Gordon (Dean of the Ontario Agricultural College, University of Guelph) chose the Thatchers in part due to their innovation, commitment to product quality, customer service and their ever-present desire to talk to the consumer about what they do on their farm. They are energetic, hard-working, and love to share their story with their customers for the betterment of the entire agricultural industry.

The Brocks were named as Runner-Ups due to their “early adoption” attitude towards new technology and commitment to increasing profitability while working with the environment.

Nominated by Ontario Farm Fresh, the Thatchers altered their operation in 2007 from being a struggling hog farm, to now a thriving 250 ewe sheep operation and farm gate retail shop that features their own naturally raised meats, including hormone and additive-free lamb, beef, pork and chicken. In addition they sell Mennonite-smoked summer sausage, Omega-3 eggs, honey, maple syrup, fruit jams and Dana’s ever popular home-baked meat pies.

In the spring of 2012, thanks to a grant from the Ontario Cattleman’s Association, they were able to add an on-site butcher shop providing them the ability to cut and package their own meats – ensuring they had complete quality assurance and control.

On the horizon, the Thatchers would like to add a pavilion to their property, host agricultural-themed events, chef dinners, school tours and group outings. The goal is to bring people out to the family farm as a destination, making the connection between farming and the future.

Co-chairs of the event, Chris and Christy Hiemstra of Clovermead Apiaries in Aylmer noted that “Spending time with such imaginative and successful young farmers reminds us all that farming is a rewarding occupation and we need to be positive and celebrate our accomplishments.”

To be eligible for the Outstanding Young Farmer award, farmers must be between 19 and 39 years of age, derive at least two thirds of their annual income from farming and demonstrate progress in their agriculture careers. Nominations for the 2014 award will open in September and are due December 1, 2014.

Dana and Adam will now represent Ontario at the National competition being held in November in Regina, Saskatchewan, where they will meet the winners from the other provinces, one of whom will ultimately be named Canada’s Outstanding Young Farmers.

The 2013 event was sponsored by Farm Credit Canada, Dupont-Pioneer, Better Farming, OMAFRA, GROWMARK and the Grain Farmers of Ontario.