Some fear last year’s extreme weather events that devasted B.C.’s poultry industry is a preview what’s to come as climate change worsens. Here’s how to prepare for that new reality 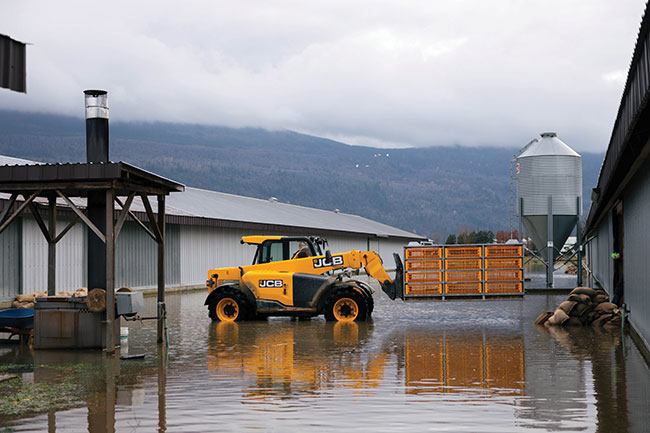 Ask a British Columbian poultry producer to describe 2021 and you’ll likely hear descriptors like catastrophic and gut-wrenching. Together, an extreme heat dome event in late June and devastating flooding in November killed more than 1.2 million birds in the province’s poultry barns.

Though it’s not possible to attribute individual weather events to climate change, many fear 2021’s extreme events could well be a preview of a new, more violent weather reality. How can the poultry industry best prepare?

“The heat dome started on the Friday. When I came back to work the next week, all day Monday, Tuesday, Wednesday, we were doing insurance claims for growers,” says Dr. Gigi Lin, a veterinarian with Canadian Poultry Consultants Ltd.

“They all died from heat prostration. The birds either died from heat stress directly or you saw layer production drop dramatically, especially in broiler breeder layers. It was heartbreaking. As a veterinarian, there’s only so much I can do. I can’t change the temperature.”

The losses didn’t end when the thermometer finally dropped, Lin says. She diagnosed nine cases of blackhead in turkeys within two to six weeks of the heat event: an “unheard of” number, she says. Diseases like infectious laryngotracheitis (ILT) spiked for the next six months.

“It’s hard to prove the direct correlation to the heat wave, but we do know that when birds are stressed, they’re more susceptible to disease,” Lin says. “So, it was a very significant event: first the direct impact, and then the triggering of diseases related to immunosuppression in the aftermath.”

Sixty-one commercial poultry farms stood in the direct flood zone. In early December, the B.C. government reported the flooding had killed 628,000 chickens: birds either drowned in the floods or died when flooded roads left barns cut off from feed and other resources.

Secondary losses mounted over nearly three weeks. With roads throughout B.C.’s primary poultry region flooded, the entire poultry supply and logistics chain backed up: hatching eggs couldn’t get to farms; processing-ready broilers couldn’t make it to market; even feed ingredients had no way to reach manufacturers.

An impending test
Lin says that, though she hopes the heat dome and flooding event were one-time anomalies, she expects unprecedented natural events ahead.

“I don’t want to say a new normal, but a future challenge. We’re seeing not only in BC but also across the world that we’re having very abnormal natural disasters and natural events.”

To mitigate losses from future extreme weather as much as possible, it’s time to plan now.  Not surprisingly, heat-stress related losses were highest in older, bigger birds; in older barns with lower ventilation; in barns with higher stocking density; and amongst conventionally caged layers.

“If we base infrastructure on the temperatures we’ve had in the past decades, it’s probably not going to be efficient or effective to keep our birds comfortable,” says Lin. “So, this is a good time before another extreme event to evaluate your ventilation system; evaluate your barn insulation. Talk to experts. Seek out a resource on barn design to make it easier for birds to withstand extremes.” 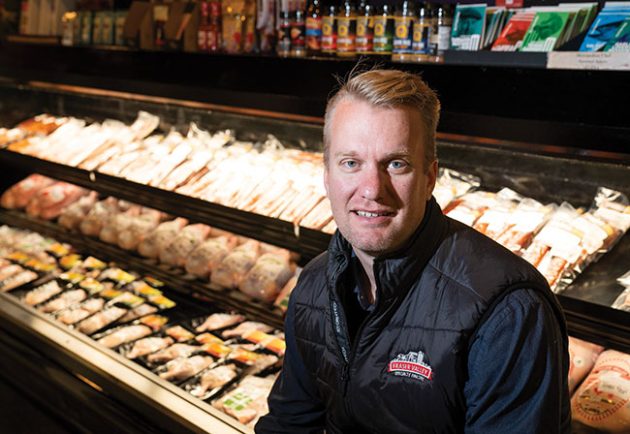 “For that kind of heat to hit, especially in June, was just shocking and surreal. When it gets that hot for that long, even the water lines heat up. We had sprinklers going everywhere to try to cool the buildings, but there wasn’t enough well capacity. It was tough.”

Falk says every new barn his company builds, including the three currently under construction, will have tunnel ventilation with a water curtain.

“Obviously, [the heat dome] did happen and, therefore, it could happen again. So, we want to definitely mitigate the losses there. And it just grows a better bird: it makes sense to do it,” Falk says.

New and new-to-here technologies may prove key to managing poultry in a changing climate. Some are already widely used: in regions more traditionally prone to heat like the the southern U.S., poultry barns often employ evaporative cooling pads to keep birds comfortable (though the resulting high humidity carries new problems).

New cooling solutions
Other technologies are brand new. Dr. Bill Van Heyst, an adjunct professor in the University of Guelph’s School of Engineering, is currently studying whether geothermal energy might be a workable solution to cool incoming air during the summer and preheat it in winter. Obstacles remain: in addition to making a economically viable geothermal system, he’ll have to overcome condensation issues that could lead to birds slipping.

“Geothermal is going to take some time. Right now, we’re at the theoretical stage in computational fluid dynamics,” he says. “What works in theory, you have to be careful in practice because there are a lot of other considerations you need to account for.”

Phase change materials – waxes that can be added into walls to absorb heat during the day and release heat at night – may also prove an extreme temperature mitigating solution of the future, Van Heyst says.

“Climate change has been very slow, thankfully, but it is still progressing,” he says. “I think what we’ll see in the poultry sector is a slow but methodical inclusion of new technologies as they are demonstrated to give the benefits they claim. Producers should be looking at new technologies as they come available and doing cost-benefit analyses. In any of these technologies, a critical factor is that farmers can maintain profitability.”

The flooding challenge
Arguably, flooding is even more difficult for individual farmers to manage than temperature extremes. Though none of Fraser Valley Specialty Poultry’s barns flooded and they managed to keep all their birds fed during the November flood, Falk says they were “really close” to running out of feed.

“The flooding will definitely make people think a little more carefully for the next decade or two about how can we build land up more so it’s not as at risk, or build the dykes up, or use roads to channel flood water,” he says.

He and Lin both say a better crisis warning system is necessary to help producers make better forward-thinking decisions, like shipping nearly market-ready broilers and sourcing additional feed ahead of an extreme event.

“This was such a huge event,” Falk says. “It really brought to light that our system is fragile. As solid as we think it is, it’s actually very fragile. And so a major natural event like that will wreak havoc and the weak spots will get found.”

How sustainable is your farm?
As extreme weather events ratchet up producers’ – and consumers’ – interest in sustainability, managing a farm’s environmental footprint is increasingly critical. Now, there’s a new tool to help make doing so easier.

The full version of NEST, scheduled for launch at the end of this year, will be a complete sustainability calculator that can translate a farm’s data into farm-specific carbon-, water- and land-footprints. It will also provide specific technology and management recommendations based on the location of the farms.

“For example, if a producer wanted to increase the amount of renewable energy that they were using, the tool would take into account the farm location, the availability of wind or solar energy resources, and the provincial electricity grid mix in order to calculate the environmental payback time of adopting that particular technology,” says Dr. Nathan Pelletier, NSERC/Egg Farmers of Canada Industrial Research Chair in Sustainability and the NEST project’s lead.

Extreme weather by the numbers