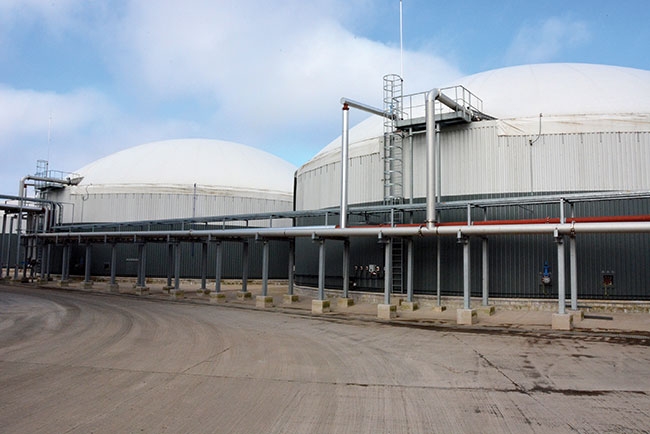 Northern Ireland produces an estimated 260,000 tonnes of poultry litter each year. This leads to the problem of how to dispose of it in an environmentally friendly way. Until now poultry farmers have relied on arable farmers to take the lion’s share of the litter. But a new solution is now in operation.

While the overall flock size in the country keeps on growing each year, the problem of how to handle the mountain of poultry litter produced from the birds intensifies.

In June 2017, the total poultry population in Northern Ireland was almost 25 million birds. Compare that with the figure back in 1981 at 12.2 million and it tells you the population has doubled in the past 36 years.

However, look more closely at the breakdown of the figures and its clear the broiler bird population has tripled in the same timespan to a total of 16.7 million birds in June 2017. No matter how you look at it, that’s a lot of birds producing a lot of poultry litter.

Estimates from Northern Ireland’s department of agriculture, Daera, suggest the total amount of poultry litter produced in the country is around 260,000 tonnes annually.

That’s a lot of litter heaps. But now a solution to use 40,000 tonnes of that each year is in operation.

There have been many attempts to come up with a solution to solve the escalating concerns over poultry litter in Northern Ireland. After eight years in planning and 18 months building time, a new state-of-the-art biogas plant situated in the town of Ballymena is running at full capacity.

While there are similar plants in China, it is the first facility in Europe to run solely on poultry litter. According to the developers, it certainly won’t be the last one to be built.

A big investment
The Tully Centralised Anaerobic Digestion Plant has a capacity to produce 3MW and cost $34.4 million to construct. It represents a huge investment for Dublin-based Stream BioEnergy Ltd. The company developed the project with Danish energy specialists Xergi, who also helped build the plant assisted by local firm BSG Ltd.

Stream BioEnergy managing director Kevin Fitzduff says the plant is operating well. “We are now running at full capacity and producing energy,” he says. “The plant runs 24 hours per day and seven days per week.”

Heavy burdens of red tape as stipulated by the European Commission in Brussels means there are restrictions on the quantities of nitrogen and phosphates Northern Ireland farmers can spread on their land. While Daera investigated a number of small systems for utilizing manure over the years, none of them were actually brought into commercial production.

For now, the manure used by the energy plant is delivered from dozens of poultry farms contracted to Moy Park, the country’s largest chicken processor now owned by Pilgrim’s Pride Corporation in the U.S.

“The litter comes from over 100 Moy Park contracted farmers in the local area. Xergi (the EPC contractor) provide operations services to the plant and have 12 full time staff on the site. In addition, many off-site jobs have been created through a range of contracting and professional services that the plant requires,” Fitzduff explains.

Plant operations
Xergi has been contracted to manage operations at the Ballymena plant for the first 10 years, according to the chief executive officer Jorgen Ballermann, who says: “It has been a long development process and we appreciate the patience and willpower that Stream BioEnergy has shown.

“It’s not enough to have a good biogas plant. It is essential that the operating staff know how to manage biogas plants. Therefore, we always supply biogas plants in combination with a well-developed training program that ensures that employees can manage efficient operations of the plant.

“Based on this, Xergi has recruited and trained a group of local employees to manage operations. If there are unexpected challenges, we naturally have experts who come and assist the local staff, just as we have online access to the plant from our monitoring centre in Denmark,” Ballermann says.

Unique technology
When the poultry manure arrives on site it is fed into two industrial sized hoppers with walking floors that feed it to the next stage. It is then mixed with recirculated liquid before being pumped into the digesters.

During the mesophilic digestion process, bacteria break down the litter and produce biogas. The total digestion time is approximately 45 days and the biogas produced by the plant is fed into the two 1.5MW gas engines that generate electricity on site, which is then sold to the national grid.

The process is enabled by a unique device from Xergi called NiX technology. It converts the poultry manure raw material into energy. As part of the process, the machine strips the nitrogen from the litter. This allows it to digest up to 100 per cent poultry manure.

In normal circumstances, it is difficult to convert large amounts of poultry manure in biogas plants because it contains high levels of nitrogen, which inhibits the bacteria that produce biogas.

“The remaining liquid and the fibre digestate are a safe nutrient rich fertilizer that can be used by farmers. The electricity is exported to the grid and is enough to power 4,000 homes.”

Stream Bioenergy say it has plans to further develop potentially similar plants in Ireland. While the Ballymena plant is using up to 40,000 tonnes of poultry manure per year, this is only around 15 per cent of the total poultry manure produced in Northern Ireland.

“We have plans to develop further plans but are not in a position to announce these yet,” Fitzduff adds.

Ontario farm runs digester plant
There is a somewhat similar digester system running in Ontario that produces 500kW of electrical output from organic waste but not solely from poultry litter.

This one is based at Athlone Farms, which is a family-owned and operated 600-acre dairy and crop farm. The solid output from their digester produces bedding for their entire herd.

The resulting material, or the digestate, is stored and applied to the land when conditions allow. The biogas generated by the system is transferred to Combined-Heat and Power (CHPs), which covert the biogas into electricity and heat. The operation sells the electricity under a feed-in tariff contract.

Vicki Hilborn was part of the team that helped with the Canadian digester plant during its early days when she was employed by PlanET Biogas Solutions.

Says Hillborn: “I provided biological and technical support to the operation until 2015. This project was built to digest manure and other organic waste and to generate up to 500 kW of electricity.

“The capacity for the system to treat poultry litter varied on the other substrates available to this operation. Normally it was limited to 1.5 to two tonnes per day.

“This material was mixed with the dairy manure as the poultry manure was easily accessible to the farm, as the neighbour is a chicken farmer, and poultry manure has a relatively high biogas content.”