Searching for a Solution 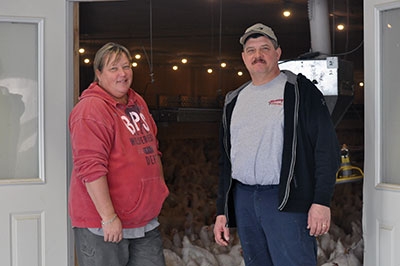 Joanne and Keith Veenhof are always making improvements to their breeder operation, and European ventilation was the answer to their air quality needs

Joanne and Keith Veenhof both grew up on farms, and after spending some years of their adult lives away from farming, they felt the call to return to it. “Joanne grew up on her parents’ broiler farm, and I was raised on a dairy farm,” says Keith. “The breeder industry appealed to both of us, as Joanne was familiar with chickens, and I was familiar with the similarities between dairy and breeders, namely the concepts of body scoring and feeding for production.”

The Veenhofs decided in 1999 to buy a breeder farm in Wainfleet, Ont. It had a flock size of 9,500, which they’ve grown to 15,000 hens. They grow their own pullets (day-old to 20 weeks), and pullets for another farm on the opposite cycle. Their five children all help in the day-to day running of the operation, after school and on weekends.

Every year since starting their operation, Joanne and Keith have made improvements to the pre-existing buildings that would improve production results and boost energy savings and efficiency. “Among the early improvements we made was the addition of heat to the barns for better egg production in winter months,” Keith explains. “As a consequence, we found we could reduce feed consumption. We also changed exhaust fan controls from individual two-speed controls and two-speed fans to central control and variable speed fans. We found our air quality improved, and energy consumption went down.”

The Veenhofs also replaced their circulation fans with lower-energy draw fans, and upgraded the wiring in those fans to allow variable speed. “Whenever possible, we tried to change energy use to 220 volt in feed motors, auger drives, and so on to give us maximum flexibility,” Keith says. “Our next improvement was compact fluorescent lights to reduce energy consumption, and now in the new barn we have gone to LED lighting.”

In the time leading up to the construction of that new 84 x 400 foot single-storey breeder barn, finished in January 2012, Keith and Joanne tried to attend as many open houses as they could to check out the latest options and speak to fellow producers. LED lighting was an obvious choice, but there was digging to do in order to decide about other aspects. “The area of most note for us was the variety of ventilation systems available out there, and we gathered a lot of feedback from other producers regarding how their systems changed air quality, and in turn, production results,” says Keith. “In our plans for the new barn, we had some definite ideas as to what we hoped to achieve. Ideally, we hoped for improvement in production results, air quality, running costs and capital costs, in that order. And air quality is very important as it’s one of the largest factors affecting production.”

In doing their research, the Veenhofs started browsing European poultry magazines, looking at articles concerning ventilation. “Articles concerning open houses at breeder barns were of particular interest and we noticed that all these barns used the same air intake system,” Keith explains. “The way they move air in the barn is quite a bit different from what we would normally see in Canada. When we contacted the manufacturer (Tulderhof, based in the Netherlands), we asked if they could show us barns that had this system. We were told that we would have to come to Europe, as they did not have a distributor in North America at that point.” When the Veenhofs arrived in Europe, they were shown several breeder operations that were using this system and the couple was impressed. “This system appealed to us, as it met all three of our criteria,” Keith says.

Their custom-built barn therefore included a Tulderhof 3300 Flash system, which Keith says is comparable in terms of capital cost to other air intake systems. The running cost of the inlet system in itself also doesn’t use any more or less energy than other systems, he notes, but because there are no circulation fans needed, and the exhaust is designed for maximum cubic feet per minute, energy use is minimized through these avenues. “I would summarize by saying that it’s designed to maximize productivity for the amount of money invested,” Keith says. “The way the air enters the barn, mixes, and then exits gives more control over the quality of the air in the barn, and in turn helps achieve production results.”

After finishing their first flock in October 2012 in the new facility, the Veenhofs were able to draw some firm conclusions about the Flash 3300. “There was a sharp learning curve regarding the use of the ventilation and its capabilities but it’s manageable for sure,” Keith says. “The most surprising change was the energy usage. Comparing to four years of flocks of roughly the same size and at the same time of year, we found that electricity use was roughly cut in half.” Production results for that run and all runs since were average, a normal flock with normal mortality and normal chicks per hen housed, but in 2013.

The Veenhofs were impressed enough to install Flash 3300 inlet systems during the retrofit of their old barns in 2013, when they changed them from breeders to breeder pullets. “We are currently using these barns in a crossflow configuration and are quite pleased with the results so far,” Keith says, “but we have never grown pullets before so we have nothing to compare to.”

How the system works
Poor air movement inside the house can cause cold spots or draught, condensation of incoming air, and worst of all, ice forming on the air inlets or even inside the house, says Jorn Rinia, Tulderhof marketing and sales manager. Predominant wind directions also play a role in the air movement inside a poultry barn, as well as the amount of air that passes through.

Rinia says that while traditional inlets don’t offer the ability to steer incoming air to different areas inside the barn, Flash inlets feature adjustable spoilers, which allow much more precise steering of the air, in addition to an insulated vertical plastic slide for air amount regulation. “Since the air steered in the direction it’s needed before it enters the barn, there is very little condensation on, or freezing of, the inlet,” says Rinia. “This makes them ideal for houses in countries like Canada with extreme winter weather.”

The small amount of condensation is due to the rope closure, but the company offers a spring closing option to avoid this. Freezing doesn’t occur because the gliding system is inside the barn. Jorn adds that the Flash air inlet is the ideal inlet for the Canadian barn style (flat ceilings) and it fits perfectly between the wooden studs.

The Flash concept, which was first marketed in 2008, can be used in every type of barn, and Rinia says it is able to achieve an ideal climate even in barns 30 metres wide. “In Europe, we have mostly sold the system in layer barns, and starting in 2010, we were really busy in Europe with the banning of battery cages,” he explains. “We didn’t have much time for building export markets, but now we have.” In a layer barn, the Flash 3300 allows you to send the same amount of air flow over the nests, which means the birds are comfortable and there will be fewer ground eggs, says Rinia.

Cost return is usually achieved within about a year, with most of the savings from reduced fan usage, if cross ventilation was accomplished by fans. The louvers (spoilers) are adjusted manually once and the inlets are controlled with a computer and a winch. “The system is also able to create a 1/3 or 1/4 minimum ventilation where only one out of four inlets are open,” says Rinia. “We will assist you to set up the louvers in the right position, do smoke tests and set in the right curves on your computer, advise you on making the barn airtight and so on.”

Rinia also notes that more and more producers in Europe and beyond are facing regulations which dictate the provision of daylight for their birds. To deal with this, Tulderhof offers transparent air inlets which, like the company’s non-transparent version, easily fit in a light street or row of connected windows.