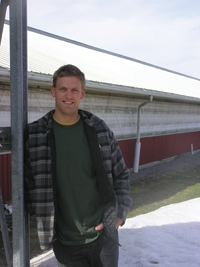 Self-designed. Dirk Heeg, a turkey farmer near Dunnville, Ont., has built a system for controlling the natural ventilation in his barn and getting it exactly how he wants it.

Dirk Heeg faced a quandary. The young farmer wanted lots of information from his naturally ventilated turkey barn and very precise control of what was going on within, but he couldn’t find an off-the-shelf system that gave him everything he wanted and needed. He also wanted to save some money.

As a solution, he thought he might be able to build his own system of sensors and controllers, and hook it all up to a laptop computer using readily available software.

Tapping the expertise and assistance of brother-in-law Jesse Rocca and other family members and friends, and using his own knowledge, the Dunnville, Ont.-area farmer not only built a system that does everything he wants, but also put together one with the capacity and capability of doing much more than he expected.

It gives him greater control and precision and he can add value to the farm’s production. The system has unlimited versatility and it suits his farm. “Every farm is different and this allows you to focus on what you want,” he said.

In his case, he divided the 5,500-tom turkey barn into three zones and currently monitors feed and water, temperature, ventilation, bird weights, weather, and more. It also allows for future expansion of the system to provide you with even more information and greater control. And although it takes some work and some learning, it isn’t that difficult. He said he went into the project with some general computer knowledge and, with help, was able to put it together, in about a year, by going one step at a time.

His first project, and the reason he opted for a build-it-yourself system, was to develop a system to provide minimum ventilation. This had been a problem. There seemed to be few, if any, systems available for naturally ventilated barns and his existing system had the porridge problem – too hot or too cold when what he wanted was one that was just right.

With six curtains he knew he needed multiple controllers. His brother-in-law has experience in automation and led Heeg to Programmable Logical Circuits. Heeg was worried about programming the PLCs and spent eight hours learning how to do it. He test-drove his programming on the computer and it worked. But he also needed a good way to measure temperature. He turned to thermo couplers and transmitters, hooked them up and when ready installed the wiring. It all worked.

Before he installed the new system there could be a five- to seven-degree change in temperature and the curtains wouldn’t move. “This wasn’t ideal for minimum ventilation. We had to go out and work manually.”

It was a lot of running back and forth, especially as the birds aged. There was also a range of other problems related to temperature and condition of the litter.

The thermocouple gives him 0.54 F accuracy for temperatures ranging from –58 to +212 F.

Weather Data
He even has the computer hooked up to the weather network through the Internet, which provides constant reporting of temperature, wind direction and velocity. The computer has been programmed to react to a combination of wind velocity and temperature that would compromise minimum ventilation. It can respond by automatically closing the curtains on the windy side and opening them as much as is necessary on the lee side, thus ensuring minimum ventilation is maintained.

Another problem was sunset and sunrise. With the sun low in the sky, the sunlight would stream into the barn if the curtains were open and scare the birds. The Weather Network provides the times for sunset and sunrise and, to get around the problem, the computer is programmed to keep the curtains closed on the side blocking the sunlight until the sun is higher in the sky.

“This keeps the birds calmer,” he said.

He thought of setting up a weather station on his farm and hooking it up to the computer, but Rocca suggested using readily available data from the Internet instead of spending money and time with a local weather station.

At first he would take his laptop from the house into the barn, hook it up and proceed. But he needed something (a human machine interface) in the barn. He looked at a comparatively simple LCD system, but decided on a panel PC to which he added some software to control the curtains. The panel PC also provided the versatility to use any type of HMI software; and the ability to use remote PC control software. “I am now able to control and view HMI from anywhere even using a smartphone, which is very useful when I’m away from the barns or on vacation,” he said.

Adding Excel software was a breakthrough. It allowed him to download publicly available computer code to interact with the PLCs.

To increase the capacity and capability of the system he added the spreadsheet program Windows Excel. He designed the Human Machine Interface for Excel, which took some time, but he only had to do it once and it was easier than he expected.

The information he is receiving from sensors in the barn is easily converted to bar and line charts, making the information easy to absorb and record. It can also provide a detailed record of everything from feed and water consumption to growth rates, feed conversion, weather and barn conditions.

Added Benefits
Currently he has feed and water alarms that call if there is a problem. Also Excel automatically sends an e-mail to the feed supplier when the feed tank gets low He has added a scanner and scans in the feed bills to have an easily accessible ongoing record on the computer. And there remains much more that can be done.

He can, for example, control the lights and fans, and, if he wants, hook up additional alarms to the computer. He expects soon to add a water line flush routine to disinfect between flocks (water line disinfecting) and during production, keeping water lines cleaner, and, on hot summer days, keeping the water cool.

He is also able to install a sprinkler system because he can easily set up a control system to monitor and manage it.

Even with this in place he will have barely tapped the capacity of the laptop computers.

Heeg has made the results of his efforts available on his website at http://www.westsidefarms.ca/. At that site you can get a look at what the computer is up to. There is a main page offering an overview and tabs at the bottom that link to pages for feedtrend, temptrend, data, weather, feed, birdtrend, mortality and heattrend.