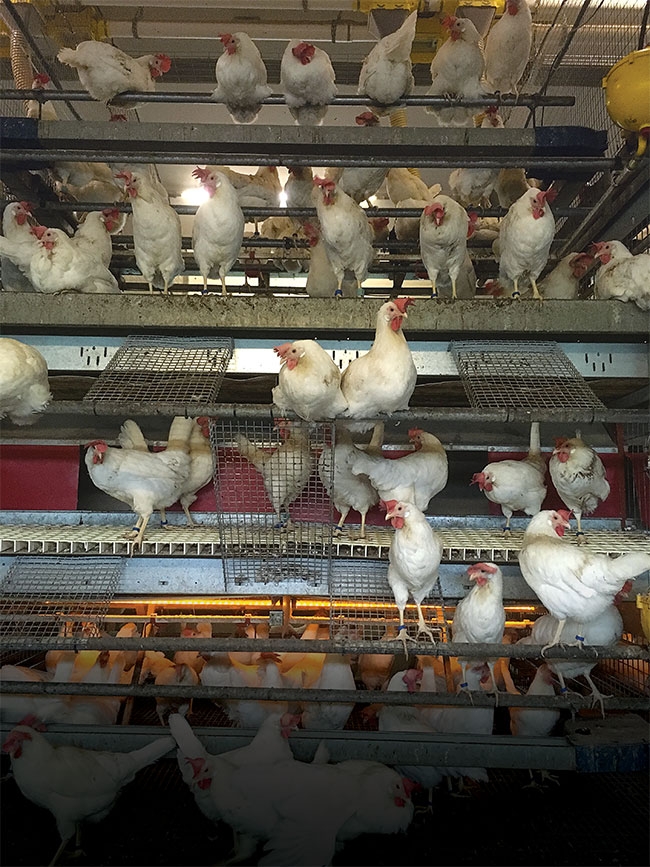 While precision farming technology has taken the crop production world by storm, it’s been slow to enter the livestock sector, especially poultry production. But in recent years, innovative companies and researchers around the world are finding new ways to measure, calculate and analyze data using sensor technology.

Their work has improved the rate at which farmers can detect disease, and has helped improve overall health and welfare.

What’s on the market
In a recent article on poultry technology and the rise of robotics, Canadian Poultry took a look at some of the data-collecting tools available on the market today, featuring companies like ChickenBoy and Fancom.

ChickenBoy is a lightweight device that slowly travels on rails situated above the flock, gathering information on ambient conditions (humidity, temperature, airspeed and CO2 levels), health and welfare. It takes thermographic images, which can be used to sort live stock from dead. The thermographic images are also used to assess dropping colour, which can predict disease two to three days earlier.

At KU Leuven in Belgium, professor Tomas Norton’s research team often works in collaboration with industry to test new technology, including sensors. In one of its earlier collaborations, the university worked closely with Fancom to evaluate precision livestock farming technology for the poultry sector.

Specifically, they looked at the use of camera technology to map the behaviour of broilers and relate it to different management and welfare issues they were seeing in the barn. “Over the years, we’ve looked at linking the data coming from this sensor with the different indicators that are of value to the farmer,” he says.

Some of those indicators include functionality of the feed line, ventilation, litter quality and welfare scores. “The idea is that by using the animal itself as a sensor, actually we can identify quite quickly when there are challenges to the growth of the birds,” Norton says.

ALIS Cluster Sensor, which covers an area of five-square metres, uses thermal imaging and allows the farmer to monitor flock mobility and clusters that can trigger poor litter quality, pododermatitis and adverse gut health. It also alerts farmers to the temperature of the birds.

“If the temperature of the birds is too high, it usually means that there’s something wrong with the birds’ health or the conditions are too hot in the barn,” Mitchell says. “Heat stress is a trigger for several things, but ultimately it’s linked to disease or infection in poultry.”

The sensors all link to the same cabling infrastructure as Greengage’s lighting, which means there’s no additional investment to the farmer if they choose to add sensors later. Because the lights are induction-powered, they simply clip on rather than being hardwired into the barn.

The lighting is so simple to install, explains Mitchell, that no electrical contractor is needed. The added benefit of working with this type of easy-to-install system is that it can be moved around the barn as needed.

The fourth sensor, ALIS Chirpy, detects and alerts farmers to stress in young chicks. It is the result of collaborative acoustics research with several U.K. universities, but mainly Newcastle University.

The company wanted to find out if there was a correlation between vocal sounds and animal welfare. Read more about this device on page 42.

All Greengage sensors are connected by Wi-Fi to a software platform in the form of a web app so the farmer can monitor the barns from a mobile device. Currently, lighting cannot be controlled using a mobile device, but Greengage is working to implement this feature as well.

Birds wear infrared ankle sensors to monitor their movement throughout the barn.

Sensor-based research
More recently, KU Leuven’s Norton has begun work on a European-wide project that’s studying the use of sensor technology in layer housing. The first is looking at red mite outbreaks in the barn, a problem that causes anemia and frustration in birds. Norton and his team are trying to identify behaviours that are linked with infestations.

While the coughing is not very audible, they want to be able to pick up signals that alert producers when a problem may be surfacing. Published work on this research will be available soon.

Finally, Norton is also using sound technology to measure the feed intake of broilers. “Feed is a really important factor on a broiler farm, even more than a layer farm,” he said. “It’s 70 per cent or more of the input costs.”

Led by Michael Toscano, poultry welfare researchers from the Center for Proper Housing, Poultry and Rabbits (ZTHZ) in Switzerland are trying to better understand hen behaviour through research at the individual level. ZTHZ is a collaborative effort between the University of Bern and the Federal Food Safety and Veterinary Office.

Toscano monitors individual birds using an infrared tracking system. After putting the information into a graph, he was able to pick out patterns.

That is, individual birds have very set daily routines in the way that they move from the litter area to the nest boxes. Some birds really enjoy going outdoors, while some never even venture towards the door.

Having access to this type of information could be beneficial for breeding companies, Toscano says. “You want good egg laying behaviour,” he says. “You want birds that are laying in the nest box, and it would be really interesting to figure out what’s causing that variation.”

Another trait Toscano would like to quantify is feed efficiency – how much feed a bird consumes versus how many eggs they lay.

In terms of hen welfare, Toscano is also interested in learning more about feather peckers and their motivations. “Where flocks have access to a range, the flock tends to have less feather pecking,” he says. “Now, whether that’s because birds that are feather peckers go outside more or whether birds that would be feather pecked are going outside to get away, we don’t know.”

Knowing more about which birds cause problems would allow breeders to eliminate that trait through their breeding programs. “If we can identify certain traits that are linked to economic importance then that’s going to be helpful to the breeding programs,” Toscano says.