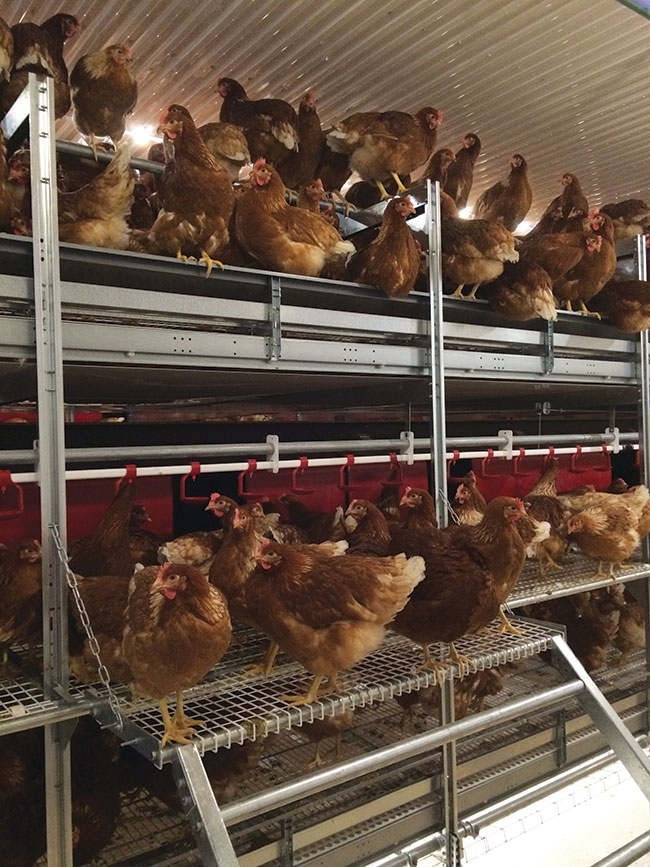 In some aviary designs, water is only available on particular elevated terraces or tiers of the system and often not located close to feeders. Producers should keep this in mind with water vaccinations. Photo: Leanne Cooley

There are some types of E. coli (known as avian pathogenic E. coli [APEC]) that can cause serious or fatal colibacillosis infection in chickens. Many factors predispose birds to the infections.

Poultry scientist Leanne Cooley, technical service lead for L.H. Gray & Son, has been collaborating for several years with Greg Brown of Archer’s Hatchery and Merck poultry veterinarian Dr. Elise Myers to investigate patterns of persistent mortality or periodic mortality spikes observed throughout the lay cycle at some Canadian egg farms. Colibacillosis, mostly caught through respiratory infection, was pinpointed as the leading cause of death.

“Part of the difficulty in identifying the relationship between respiratory challenge, immune competence and APEC mortality at problem farms was the variety of clinical observations and presentations we were observing, and it has taken several years of investigation and data collection for some of the patterns to emerge,” Cooley explains. The greatest frequency of issues was observed in brown leghorn strains in cage-free (free-run) barns of both aviary style (with litter) and those with slatted floors (with and without scratch areas). Incidences in enriched colony and traditional cage housing were also observed.

To investigate, Cooley and her colleagues conducted detailed post-mortems and extensive blood serology in pullets and layers, and when possible, did E. coli serotyping. They tracked illness and death patterns in relation to vaccination, flock changeovers and seasonality as it pertained to ventilation rates and air quality.

“In addition to infectious bronchitis (IBV) and Newcastle disease (NCD), we also began to measure Infectious Bursal Virus (IBD) titres in response to pullet vaccinations for this disease,” she notes. “IBD titre monitoring is not commonly conducted in laying hens, but I believe that it is important because while IBD can be sub-clinical, an injured/damaged bursa leads to immune suppression, which increases the risk of APEC infection.”

The blood work often showed many birds with little to no IBV vaccine titre response after live virus vaccinations. These ‘missed birds’ were now more susceptible to field challenge with IBV, which paralyzes the respiration system’s protective mucous and tiny hairs (cilia) that catch and clear dust particles from the lungs.

“When this mechanism is impaired, dust particles that can be bound to bacteria like APEC are retained within the
respiratory tract, and from there APEC can penetrate the bloodstream to cause infection. High levels of aerosol dust alone can also overwhelm this protective mechanism.”

Cooley says that work by Netherlands scientist J.J. de Wit and his colleagues helped direct her team in identifying factors that lead to successful live IBV vaccination. They found that if administering live IBV vaccine at one day of age, it is important to wait at least 13 days before spray vaccinating again for optimum immune response. They also found application to be less effective in larger flocks, and that turning off ventilation during spray vaccination increased immune response

Cooley advises that, when possible, leave fans turned off for 15 to 20 mins after vaccination and also ensure you are using the correct aerosol droplet size. De Wit also found that use of some light during vaccination increased immune response by 41 per cent because applicators can better see where and how much they are applying, and because it promotes birds to open their eyes, which allows the vaccine to make contact with the mucous tissue.

Cooley notes that live IBV virus is very fragile and that warmer water will inactivate the vaccine. She advises using water of 6°C to 8°C (employ frozen blocks of distilled water and stabilizer in your bulk tank as needed) and to always use vaccine stabilizer and neutral pH water. She notes that farmers need to be confident that vaccine was always handled and stored properly.

She adds, “No medication, vitamin or cleaner should ever be used in your sprayer or bulk tank, and it should never have contained chlorine, peroxide, acid or other chemicals. Use only hot water with vaccine stabilizer to clean bulk tanks and sprayers. Flush waterlines with clean, untreated water 24 to 48 hours prior to administering vaccine and again immediately prior to beginning a water vaccination.” In-line water medicators are generally not recommended for administration.

Cooley, in some types of cage-free housing, has used two persons spraying simultaneously in opposite directions. “This is a technique that takes practice to identify the best approach based on the housing system design and age of the birds at time of vaccination,” she notes. Culling unhealthy birds (or waiting if there is a flock health issue) is wise, as immune-suppressed birds will not respond properly to a vaccination with a live virus, and may also become reservoirs for virus mutations. Cooley also advises talking to your poultry nutritionist or veterinarian about increasing any nutrient levels in the hens’ feed or water at times of vaccination.

She says there are also some interesting ‘immune modulator’ feed additives available in Canada that are supported by research to reduce inflammatory response, increase antibody titres in response to vaccination and more. Some additives also reduce E.coli shedding.

Water vaccination tips
With water vaccination in alternative housing, Cooley says a common misconception is that all birds drink as soon as the lights turn on or following water deprivation. “Many birds immediatelyhop out to the litter areas as lights come on. They may spend some time in the litter prior to returning to the aviary to eat and drink. If the volume of water used to administer the vaccine is consumed too quickly, some birds may miss receiving any vaccine.”

Water-line layout is also a factor in aviaries. “In some designs, the water is only available on particular elevated terraces or tiers of the system and often not located close to feeders,” Cooley says. “If a bird doesn’t transit to a waterline quickly enough during a water vaccination because she’s remaining on a different tier, then she can be missed. Farmers need to closely consider these factors of their housing system when determining how much water volume to use for a vaccination, and the time duration that water containing vaccine is administered to the flock.” This may necessitate switching between two bulk tanks.

“E. coli vaccine and management efforts to reduce aerosol dust have led to a progressive reduction in colibacillosis mortality,” she notes. “An improvement in flock livability, egg production and percentage of Grade A eggs has generally accompanied these efforts.”