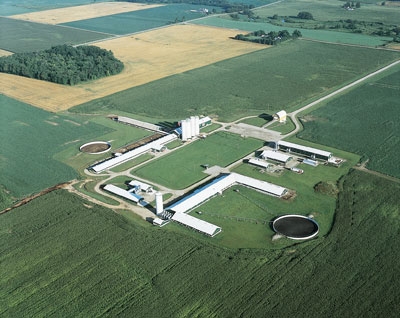 The Burford Agresearch farm is licensed as a research facility by OMAFRA. It conducts research accepted by the CFIA, Health Canada and the FDA for validation of new product registrations.

When a company hits a milestone, congratulations are in order. When it reaches a 75th anniversary, it is natural to hold a gala celebration to commemorate such an event. This is exactly what Shur-Gain did on July 11, 2012, and the event featured blasts from the past, speeches, tours and more.

Held at the Shur-Gain Agresearch Farm in Burford, Ont., the gala featured a memorabilia tent, which displayed artifacts pulled from Shur-Gain’s long history in Canada. From its humble beginnings as part of Canada Packers (see sidebar, “History of Shur-Gain”) to its purchase by Nutreco, every decade and every product line the company has launched was represented.

In addition to the memorabilia, visitors could also visit and learn about Shur-Gain’s research barns for layers, broilers, turkeys, dairy and swine. While most of the barns could only be observed through a viewer window, the dairy facilities were open to visitors.  At each facility, Shur-Gain researchers from across Canada and the United States gave guests an overview of the types of research they complete within the facilities, and how it is done. The research is extremely varied, with scientists exploring everything from how best to improve feed conversion to evaluating a particular animal’s disease-fighting potential.

Poultry Research
The poultry research arm is conducted through Shur-Gain’s parent company, Nutreco Canada Inc., a division of Netherlands-based Nutreco, which purchased Shur-Gain from Maple Leaf Foods in 2007. Most research is conducted at the Nutreco Canada Agresearch Farm, Canada’s largest independently owned research farm, which also allows for commercial-scale trials. As well, some trials are completed at the company’s poultry facilities in Quebec, but are validated on-farm with participating producers across Canada to ensure that no biases exist with respect to genetics, management, health status or geographical location. Poultry research that has a global reach is also co-ordinated with Nutreco’s Poultry Research Centre in Spain.

The Nutreco Agresearch Farm includes a two-storey broiler barn, a layer barn, a turkey barn and a specialty broiler barn. The first floor of the broiler barn has 96 floor pens for the evaluation of feed and water technologies, and the second floor is commercial scale to validate the results of the trials. Pens allow trials to be conducted separately and validated for either cockerels or pullets.

The turkey barn also has pens (24 in total) to allow for separate-sex trials, brooder trials, and grow-out/finisher
trials. The layer barn consists of two identical rooms with three rows of cages four tiers high, for a total of 12,000 birds. It has an automatic egg collection and counting system to allow for egg quality and production studies.

The specialty broiler barn contains 64 small pens (that house 16 birds each) to allow for challenge studies. The birds can be inoculated with Eimeria (coccidiosis), or Clostridium (necrotic enteritis) potentially “challenging” their health to allow researchers to see how they perform with novel compounds, various diets (with and without antibiotics), and to see if and how the disease develops when different ingredients and feeding programs are used.

Results from research trials are used to create predicative mathematical models to allow Shur-Gain to provide its customers with increased animal health and performance. For example, Shur-Gain’s new Quick Start, Strong Finish program provides poultry producers with scientifically sound feeding programs, in addition to technological service, to ensure a good start to a flock and monitoring of barn management, as well as cocci load as the flock grows.

Sustainability
At the 75th anniversary gala, Kevin Weppler, the regional vice-president of Shur-Gain, said that the core concept of the company is the research, as well as the confidence that the customers hold in their product because of it.
“We don’t produce products and sell them to a customer without testing them first,” he said. “If it works here, it will work for you.”

With the world population to increase to nine billion by 2050, Jerry Vergeer, Nutreco’s chief operating officer of animal nutrition, said, the $25 million investment in research and development Nutreco makes each year will play an important role in helping farmers, Canadians and the world meet demand.

Wouat Dekker, the global CEO of Nutreco, told attendees that Nutreco’s name was formed from the words “nutrition, economy and ecology” and that Shur-Gain’s focus on these areas and its Canadian location will play a critical role in helping feed a growing world population.

He added that, in addition to crops, animal products would also need to be improved. “We need to double the output and halve the negative effects.”

The penultimate speaker was the MPP for Oxford County, Ernie Hardeman, a former agriculture minister and Shur-Grain dealer. He emphasized the small disconnect between the government and farmers: the government wants to help farmers make a living, whereas farmers want more R&D.

The final speaker was Bruce Christie, a former long-time employee of Shur-Gain who is now chair of the Farm & Food Care Foundation. Instead of discussing the company as a whole, he spent time thanking individuals who made Shur-Gain the company it is. It was an emotional speech as Christie thanked former managers, innovators and staff of Shur-Gain.

History of Shur-Gain
Shur-Gain was founded in 1937 as part of Canada Packers Ltd. and is the largest and one of the oldest suppliers of livestock and poultry feed to Canadian farmers. Canada Packers was a Toronto-based meat processing company established in 1927 that also produced fertilizer from the meat scraps, blood and bone from its plants until the value of these byproducts as potential animal feed ingredients was realized.

Up to the 1930s, livestock were fed farm-grown grain rations where the protein and energy content varied, often resulting in slow growth or inefficient production. Additional protein and minerals from processing offal offered more balanced nutrition, and Canada Packers began producing meat, blood and bone meals for farmers and feed mills, several having the name “Shur-Gain.” The company purchased a farm in Downsview (near the location of the Toronto airport) in 1938 to test its products and feeding methods, beginning the company’s long history of supporting feed research with live
animal feeding.

The Downsview farm had the Shur-Gain name, and was the first of three research farms. As Toronto expanded, the research farm was relocated to Maple, Ont., where once again expansion forced a move to its current 840-acre location in Burford in 1991.

Canada Packers sold the business to British-owned Hillsdown Holdings, who then sold Shur-Gain to Maple Leaf Foods to the Wallace-McCain family. In 2007, Shur-Gain was sold to Nutreco, an international animal nutrition and feed company.
The Burford Agresearch farm is certified by both the Canadian Food Inspection Agency and the United States Food and Drug Administration and, along with Nutreco’s seven other research centres, houses the company’s global research program.