While its causes remain a mystery, new technologies enable processors to better spot the condition. 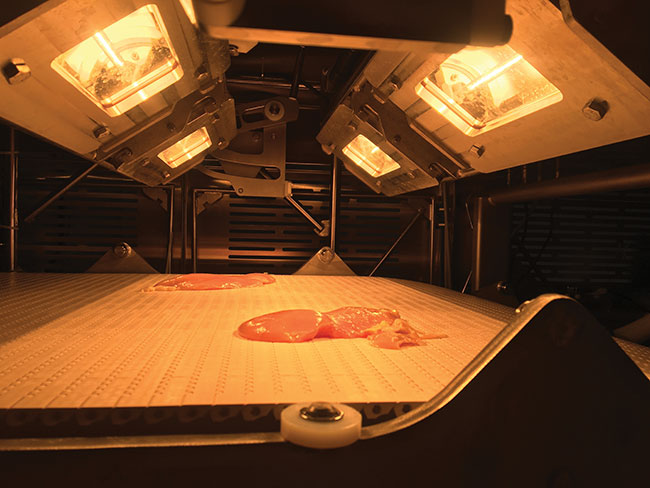 The poultry industry is turning to technology for new ways to tackle the issue of woody breast in chicken. Although it is possible to detect the condition in a live bird, the most common and accurate method is by examining the carcass after slaughter.

However, it’s an imprecise process, and the availability of skilled labour is increasingly a challenge for processing plants.

Now, advances in vision technology, artificial intelligence and mobile sensing are giving way to new tools for processors to identify and handle woody breast in poultry going through the plant.

Woody breast is a muscle abnormality in chicken breasts that affects the Pectoralis major muscle and causes it to harden. This hardening can range from a small spot to the whole muscle. In some cases, the muscle may be paler in colour with tell-tale white lines and display other signs like surface hemorrhaging and fluid on the muscle surface.

According to Eduardo Souza, vice president of research and development at Aviagen, woody breast affects the texture and chewiness of breast meat when measured either by texture analyzer or a human taste panel.

Affected breast meat can hold less water and has a higher ultimate pH level, both of which impact drip loss, marinate uptake and cooking loss. Breast fillets with severe woody breast are generally downgraded at the processing plant and diverted into product lines where toughness is not a concern.

To date, the industry hasn’t been able to pinpoint precisely what causes the condition, making it challenging to develop mitigation or prevention strategies, Souza says. It is seen to varying degrees in all broiler chicken strains raised to different finished weights and under a range of management systems.

According to Souza, it is present in North America (mainly in the U.S.), Europe, Brazil and other chicken-producing countries, but the incidence level is not openly or officially reported.

In the U.S., though, estimates peg the cost of woody breast to the American industry at more than $200 million annually in lost yield, higher processing costs and lost business due to product quality issues.

It’s important to note, though, there is no evidence of an infectious origin, which means there are no human health or food safety implications. Instead, the problem is a product quality issue. Currently, trained personnel assess carcasses on the line to measure and record the incidence and severity of wooden breast. Technological advances, though, are changing the detection game.

Hyperspectral imaging
One such solution is Waterloo, Ont.-based P&P Optica’s hyperspectral imaging technology. Their Smart Imaging System had its start in the meat industry as a tool to detect foreign objects, but as the technology has grown more sophisticated, it can now look at differences in meat composition to identify issues like woody breast.

“Unlike human eyeballs and standard vision systems, we see the chemistry and can identify chemical signatures as we look at meat products,” explains P&P Optica CEO Olga Pawluczyk. “Woody breast has a chemical signature. We are trying to emulate human behaviour based on chemical composition and remove the inconsistency (of human inspection).”

The system is being trialed at Georgia-based Fieldale Farms, one of the world’s largest independent poultry producers. The company operates two slaughter facilities and one further processing plant, handling approximately 140 million birds annually.

“We sell value-added niche products, so we can’t afford to have those products rejected for quality issues by our customers,” says Corbett Kloster, director of food safety & quality assurance at Fieldale. “Finding good employees is becoming more difficult, and the speed and competitiveness of the work make identifying this (condition) with a human eye more difficult.”

Through a combination of imaging, computing, artificial intelligence and machine learning, P&P Optica’s system works at line speed in the Fieldale plant to analyze each breast and decide whether it needs to be diverted to a different product line because of signs of woodiness. It’s been in place since last fall, and according to Pawluck, work is ongoing to fine-tune the system and its algorithm to make it better able to detect ever-smaller amounts of woody breast.

Accelerometers
Researchers at the University of Arkansas are also working on a solution. Poultry science professor Casey Owens and assistant professor of animal science Yan Huang, along with Qinghua Li, associate professor in the department of computer science and computer engineering, received funding last year from the U.S. Poultry and Egg Association for research involving accelerometer
technology.

Accelerometers are what let Fitbits and smart watches count steps and detect motion; they can also measure vibrations, which is how the research team wants to use them for woody breast detection.

The theory is that woody breasts vibrate and transfer vibration differently from so-called normal breasts. Researchers will be attaching accelerometers to the breasts of live birds to try to identify motions associated with woody breast. At the same time, devices will be placed on top of deboned breast meat to measure vibrations as they move through the meat and correlated with any signs of woody breast.

Handheld device
Research led by Dr. Amit Morey in the Department of Poultry Science at Auburn University has resulted in a handheld device that can instantly identify and measure woody breast. It uses bio-electrical impedance analysis to differentiate severely affected breast fillets from those without woody breast by analyzing the meat’s electrical properties.

The device can be used as a quality assurance verification tool in a processing plant to check for human error in sorting breasts; during the research study, approximately 10 per cent of woody breast fillets detected by the device had been categorized as normal by human inspectors.

Prevention
Ultimately, though, the most effective solution would be preventing the issue from happening in the first place, and research remains ongoing. A key area of research has been to understand the factors which influence oxygen and antioxidant levels and how they may contribute to the onset of woody breast.

According to Souza, Aviagen has ongoing trials internally and with customers to investigate various factors. They include the environment, management and nutrition, which might influence muscle development and growth and contribute to the incidence and severity of woody breast.

Although data has been encouraging, no one factor has been identified as the sole cause of the condition and it is likely multifactorial in origin, he notes. 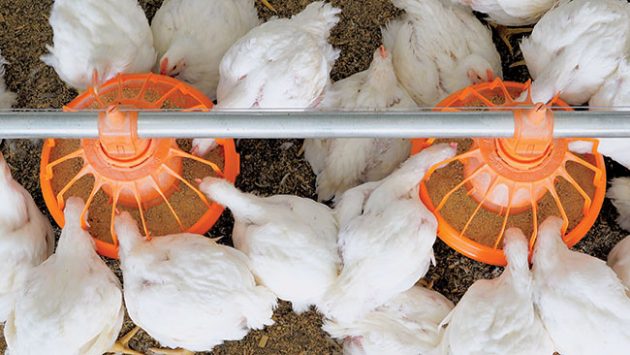 Tips for producers
Based on current industry research and observation, producers are encouraged to reduce the risk of woody breast by: