A new technology may save farmers a lot of money 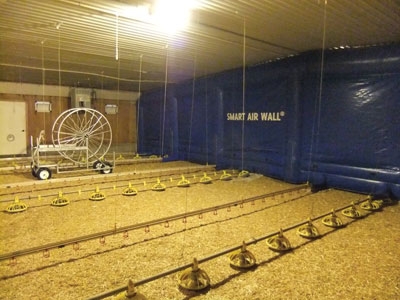 By using the Smart Air Wall system, you can save up to 60 per cent of your heating costs, says Dave Loerchner, a sales representative for Smart Air Wall.

In a cold-climate country like Canada, keeping your poultry barn heated is essential, not only to your flock, but also to all the other systems involved in keeping your birds happy and healthy. However, heating your barn can also be very expensive, especially when chicks are first placed in the large area and don’t quite utilize all the space that is available to them.

The Smart Air Wall, developed by the European company Sidijk (www.sidijk.com), can reduce overall heating costs associated with your barn by using an inflatable barrier to temporarily reduce square-footage. This can help lessen not only energy costs, but also the time and effort spent cleaning and walking the barn.

The wall is made of the same plastic used for children’s inflatable bouncing castles in parks and playgrounds, but simply takes a different shape. Sidijk is so reputable in the inflatable plastics business that the company has been retained to install the safety air rails for speed skating in Sochi, Russia, for the upcoming Olympic Games, according to Dave Loerchner, a sales representative for Smart Air Wall.

Loerchner spoke at a Poultry Industry Council event late last year about the possible benefits of the Smart Air Wall system for poultry producers. He began by saying that the wall is simply designed to minimize the amount of barn floor space needed for the chicks, thereby limiting the amount of heat and light needed to operate the whole barn.

“The whole idea of this is to condense your barn for approximately the first two weeks of your flock, when you are usually heating the whole barn to keep the chicks on the floor warm,” he said. “If you move them all up to the front 40 to 50 per cent of your barn . . .  it reduces your heating costs by up to 50 to 60 per cent, but will vary slightly from barn to barn.”

The double-lined plastic wall uses a standard 1.1-kilowatt fan on 220 volts to fill it with air, which acts as insulation between the two separated parts of the barn. And because it is plastic, Loerchner adds, it will fit perfectly along the floor and ceiling to make sure that no air (or errant chicks) will get through. In addition, there are flexible holes for feed and water lines that can be adjusted with no risk of air escaping.

While the initial cost can be high, he says that thanks to the cost savings on the heating bill, the Smart Air Wall can pay for itself within a few years.

There are a total of five barns currently using the system: three in Holland, one in Germany and one in Ontario.

Jon Steenbeek, who owns and operates the only Smart Air Wall system in Canada at his Ontario farm just south of Varna, has been using it since his first flock was placed in early 2012. According to Loerchner, Steenbeek used 42,081 litres of propane to heat his barn in one year.

“That’s pretty significant dollar savings for only having the wall up for the first two weeks of the flock,” he says.