How chicken farmers care for the communities they serve. 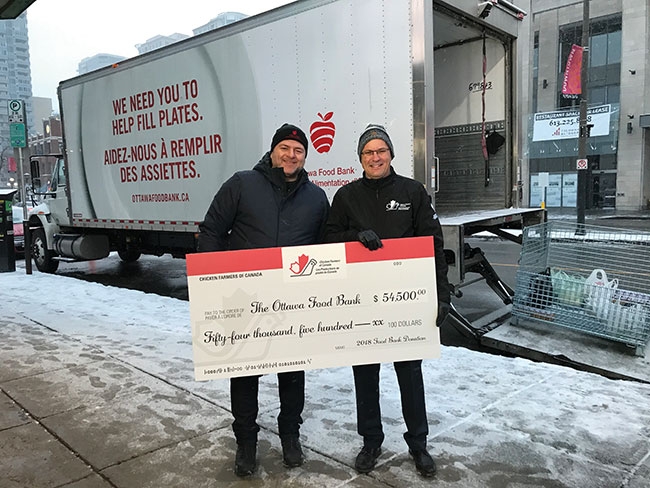 Chicken Farmers of Canada has supported the Ottawa Food Bank since 2007.

When companies and organizations talk about sustainability, they generally focus on three different aspects: environmental, economic and social. Chicken Farmers of Canada (CFC) released their Life Cycle Assessment (LCA) for the Canadian chicken industry in 2018, providing a glimpse of the chicken industry over the past 40 years in all three categories.

So far, so good
It seems the poultry industry has been doing a good job so far of looking after environmental sustainability. Based on data gathered from 300 farmers across the country along with over 60 businesses in the supply chain, the findings reflect significant progress.

In the last 40 years, since 1976, the carbon footprint associated with chicken production has decreased by 37 per cent, while water consumption and non-renewable energy use have declined by 45 and 37 per cent, respectively.

On the processing side, all federally registered processing plants are compliant with animal welfare regulations enforced by the Canadian Food Inspection Agency (CFIA).

On the farm, social sustainability also means providing safe and competitive working conditions, including training, supervision and protective equipment on the job.

It means establishing clear procedures to follow in case of an incident as well. In short, looking after workers.

Over 90 per cent of Canadian chicken farmers provide a salary over provincial minimum wage, an important factor in attracting and retaining farm employees.

Another piece of the social sustainability puzzle involves giving back to the community.

Ninety percent of respondents had contributed to their communities, through volunteering, being involved with municipal or regional organizations or providing educating and outreach.

Feeding communities
Feeding those in need has become an important component of social sustainability. For its part, CFC has supported the Ottawa Food Bank since 2007, in turn supporting 114 local agencies to feed 38,400 people each month, 36 per cent of which are children. “We believe that every Canadian should have access to a healthy source of protein, and we believe that we can make a contribution to help make that happen,” says Lisa Bishop-Spencer, CFC director of brand and communications.

In addition, $4,500 was collected through year-long staff donations and 50 per cent matching CFC donations. Altogether, nearly $54,500 was donated in 2018.

This brings the total contribution to the food bank since CFC became partners and supporters in 2007 to over $544,500.

The Chicken Farmers of Ontario (CFO) has also embraced the opportunity to give back to their communities through the CFO Cares: Farmers to Food Banks Program that began in January 2015.

Patricia Shanahan, the program coordinator, explained that CFO’s partnership with Feed Ontario (formerly known as the Ontario Association of Food Banks) allows farmers to donate up to 700 kg of chicken each year – that’s 300 birds – to help fight the food insecurity that affects 360,000 adults and children across Ontario every month.

Feed Ontario has a goal of providing 60 per cent fresh food and they have a great need for protein; this goal is changing the way they operate and CFO is working closely with them, Shanahan explains. “They have this goal, we have the means. It makes it easy for us to give back.”

The Chicken Farmers of Nova Scotia (CFNS) also provide $25,000 per year to food banks through the Feed Nova Scotia program. Other initiatives over the past several years have included their involvement in Farm Credit Canada’s Drive Away Hunger program, donating chicken to community services such as the Lion’s Club, providing recipes and educational materials and individual donations to groups such as the Valley Community Learning Adult Literacy Mile initiative. Such involvement is done on a case-by-case basis, explains Melissa Taylor, CFNS program manager.

Is the social progress sustainable?
Going forward, Bishop-Spencer says that CFC will continue its partnership with the Ottawa Food Bank, just as provincial boards will likely continue to contribute to their local foodbanks.

“Thinking more broadly about the social sustainability aspects of animal health, continued implementation of our Raised by a Canadian Farmer Animal Care Program remains important, as does the Antimicrobial Use (AMU) strategy, which continues to evolve as CFC continues surveillance and considers further reduction steps,” states Bishop-Spencer.

And, as the LCA report further explains, “Balancing consumers’ expectations, operational efficiency and optimal bird conditions remains a common challenge for the industry.

“There is an opportunity to strengthen the collaboration among all industry members and throughout every step in the supply chain to continue to improve performance with regard to animal health and care.”

For workers, the LCA reports room for improvement. For example, 40 per cent of respondents have not followed any occupational health and safety training in the past three years.

What’s more, 70 per cent of farmers do not formalize contracts with their employees in a written document.

Improvement in these areas could positively affect worker retention and satisfaction.

Looking ahead, the CFC will be spending 2019 examining the LCA data and exploring possible next steps for the chicken industry in terms of environmental initiatives and sustainability work in general.

Chicken Farmers of Canada has supported the Ottawa Food Bank since 2007.

Pat Shanahan manages the program for CFO. As she explains, through agreements with the processors a farmer can specify if they would like the donation to go to their local food bank or to be distributed through the Feed Ontario network, targeting the area with the greatest need at that time.

Feed Ontario has set a new target of 60 per cent fresh food with a large need for protein. “They have this goal, we have the means,” Shanahan says. “It makes it easy for us to give back.”

So far, 400 farmers have signed up for the program, details of which can be found at ontariochicken.ca. All farmers are eligible; donations are facilitated by the CFO.

“Our goal for this year is to get processors more engaged,” says Shanahan, who continues to work with the 18 primary processors and secondary provincial processors, looking for synergy to grow the program.