Speaking up for Agriculture

How to tell your story 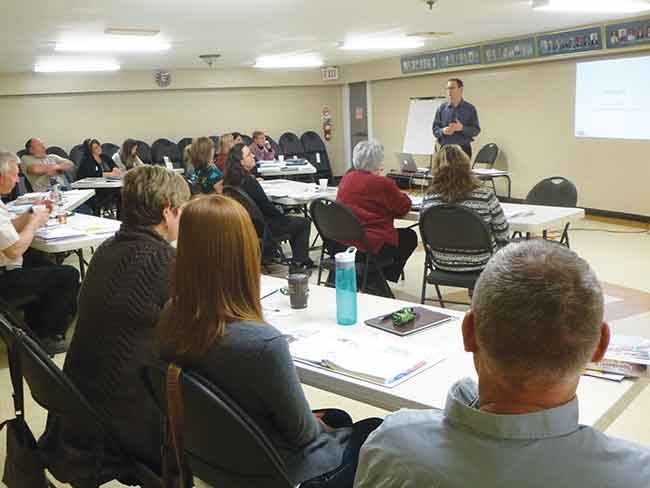 Journalist Bern Tobin shares his expertise on how to tell their stories and answer questions at a Speaking Up for Agriculture event in May.

You’re not just a farmer; you are the voice of farming. There are people who want to hear your story. Are you ready to tell it?

Bern Tobin likes to tell stories. As a journalist and videographer, it’s what he does best, and he’s good at it. Now he’s added another skill to his resume: teaching farmers to tell their story through a training campaign called Speaking Up For Agriculture, started in 2014 by the Farm and Food Care Foundation.

Ten years ago, no farmer would sit for a day in a classroom to learn how to tell their story. “The world is different now,” Tobin told the audience at the Farm and Food Care AGM in May 2015. So far, over 170 farmers had done just that: dedicated a day to honing their presentation skills, learning what to say and how to say it with confidence.

It turns out that farmers are well positioned to tell their story to the general public. Statistics gathered by Farm & Food Care indicate that information from farmers ranks third in believability, after information from a university environmental science professor and an environmental engineer for environmental issues, and second after veterinarians for animal welfare issues.

It’s up to farmers to help the public shape their perception of agriculture, said Tobin, instead of allowing others to fill that void. Either they hear straight from the horse’s mouth, so to speak, or they tune in to Dr. Oz, activists or the mainstream media.

But what do you say? Who will listen? What happens when you are faced with difficult questions? Those are the kind of questions that the Speak Up For Agriculture training will answer, helping you to tell your own story.

Aaron Stevanus has taken the course. He did a mock presentation to the “Lions’ Club in Waterloo” – actually the audience at the AGM – to show what a presentation could look like. He took out the jargon and made a connection with the audience by inserting photos of his own farm and family in slide templates that were supplied as resources in the program. He didn’t have to worry about the format; he just had to fill in the blanks.

The young 4th generation farmer told us about the corn, soybean and wheat rotation, the bees that give them honey and pollinate the crops, and the CSA program that feeds 100 families that they run from their incorporated family farm. He joked that there wasn’t a slide big enough to show all of the crops that they grow. As a farmer in the Grand River Watershed, he talked about using to no-till cultivation, continuously evolving his land stewardship by rotating crops, using cover crops, and fertility testing the soil to ensure that it is “alive”.

“I love being a steward of the land,” Stevanus told us, sharing his passion and pride in creating a positive environment in which the fifth generation of his family could grow.

It was obvious that the Speak Up training agenda had given Stevanus the tools he needed to address a group: an understanding of the public perception of food and agriculture, templates and resources to back up his discussion points, and the confidence to tell his personal story to the public. The audience could be the local Lion’s Club, or a high school class, Municipal council or Chamber of Commerce, but whoever they were, he would be prepared.

What if the questions got tough? Tobin drew on his advice as a journalist to tackle that issue. He called the technique “blocking and bridging”, a technique often used by Steven Harper as a prime example. “It’s a great skill,” said Tobin, which involves turning the discussion back to familiar ground, speaking about what you know.

It helps to know your audience too. Polling has indicated that there are 11 percent of people at either end of the agricultural knowledge spectrum, firmly negative or positive, but it’s the 78 percent of people in the middle that form the most receptive audience. “Spend your energy in the middle,” said Tobin, ”there’s tremendous opportunity.”

Make that connection, said Tobin, and tell your story at the dentist’s office, on the bus, anywhere there is an opportunity to dispel myths and share facts. Many consumers are just looking for someone to trust. They’re just regular people with many of the same values. As he said, “It’s our industry, your business, and your children’s future.”

For more information on the Speak Up For Agriculture program or to sign up, contact Farm & Food Care at info@farmfoodcare.org. Several sessions are already being planned for the fall of 2015.