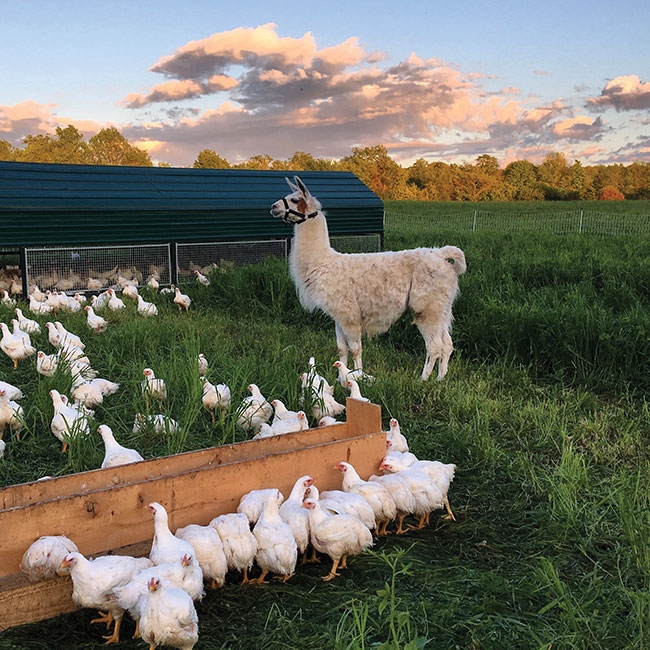 Amy and Patrick Kitchen moved from B.C. to Ontario several years ago intent on buying a farm. They knew from the start they wanted to get into market gardening. Eventually, they decided on a mixed offering. “We wanted to add livestock to the equation to diversify our income and for the manure benefits,” Patrick says.

They bought a farm in Walter’s Falls, Ont., a small community in the northern part of southwestern Ontario. They named their business Sideroad Farm and started off producing crops and hogs. Later, the Kitchens added feathers to the mix, including 100 layers, a few turkeys and 300 broilers through Chicken Farmers of Ontario (CFO)’s Family Food Grower program. Things were going well but they were convinced they could expand the broiler side of their business. “We basically sold [our chicken] to friends and family because 300 broilers only gets you so far,” Patrick says.

Then three years ago they saw the perfect opening to scale up the chicken side of their operation in a manageable way that wouldn’t require them to invest in quota. That’s when CFO launched its Artisanal Chicken Program. The first-of-its-kind in Canada, the initiative grants growers a licence to produce between 600 and 3,000 broilers without owning quota. The Kitchens jumped on the opportunity and turned it into a thriving part of their business with a diverse list of clientele.

Indeed, the initiative has been a boon for smaller, independent businesses like Sideroad Farm. And they’ve applied in droves. In just a few years, the board has approved 147 artisanal producers. “We’ve been overwhelmingly pleased with the success of the program to date,” says Kathryn Goodish, CFO’s communications and marketing manager.

Meeting distinct markets
The organization created the program, which is free to apply for, in response to a few glaring needs. “We saw an opportunity in the marketplace to enable smaller growers to be part of the system,” Goodish says.

Because of the initiative, those smaller growers have been able to help fill the growing demand for local food options in smaller, underserved communities that aren’t necessarily a fit for larger scale operations. “A lot of customers who are buying the product have a local angle – it’s part of their value proposition,” Goodish explains. “So they’re looking to source local ingredients.”

A region where it’s been particularly impactful is northern Ontario. Before the program, there were no core producers in the region. Now, there are 24 licenced small growers. One of those farmers is Thunder Bay’s Nyomie Korcheski of Country Plaid Farm. “There simply wasn’t local chicken available before,” says Korcheski, who along with her husband is one of just two artisanal producers in her community. “Thunder Bay has local product like cheeses, sauce and eggs but chicken wasn’t available until the artisanal program.”

Because of that untouched potential, sales came naturally for the Korcheskis. They sought out a few stores and restaurants in the beginning. But it wasn’t long before businesses came calling on them looking for local produce. Thus far, every unit they’ve acquired has been accounted for. Their end-of-year goal is to produce close to 3,000 birds, which is the maximum allowed under the program.

Budding producers can use the artisanal program as a stepping-stone to eventually buying quota as well. Take Mandy and Tony Willemse of Little Sisters Chicken, for example. Parkhill, Ont.-based farmers with successful hog and bailing businesses, the couple had long contemplated building a commercial broiler barn on their 400 acres of land. Like the Kitchens, they were looking to expand their revenue stream without having to commit to quota.

When they heard about the artisanal program, they thought they finally had the right fit for their business. “I saw it as a good way to get into the industry,” Tony says. They started with the program in 2016, converting a 600-square-foot pig barn into a broiler house. Tony’s in charge of production while Mandy handles marketing. They’ve built up a healthy client base selling mostly to wholesalers but also to restaurants and grocers. They also have an on-farm market store.

“It’s worked out pretty well for us,” Tony says about the program. At the same time they’re shoring up contracts, they have their sights set on bigger things down the road. “Eventually, we’ll have to buy quota to keep our business rolling,” Tony says. The couple currently produces 600-bird flocks but their barn can accommodate up to 2,500.

Artisanal producers are also bringing unique product to market. Both Sideroad Farm and Little Sisters Chicken produce pasture-raised chicken. “There’s a lot of demand for that,” Patrick notes. “This program has allowed us to expand to meet that demand.” The Willemses also use non-GMO feed. The Kitchens did as well but have since switched to certified organic.

Sideroad Farm’s birds start off in a brooder room the couple built. The Kitchens then put them out to pasture for an eight-week grow out under the watchful eye of a lama. They have a hut surrounded by an electric fence, which they move each year.

Apart from the marketing appeal of pastured chicken, the producers say it also compliments their vegetable business. “This year our potatoes and squash are growing on our chicken ground from last year,” Tony says, citing the manure benefits. “There are a lot of synergies between livestock and market gardening.”

Like many artisanal producers, the Kitchens grow pasture-raised chicken. A lama, electric fence and lockable hut protect against predators.

Learning the trade
Since many artisanal growers are new to chicken production, they’ve had a learning curve. “I had one flock that didn’t go too great,” Tony admits. “It was just about making sure I had the right weights. I’ve had to hold onto a few birds an extra week.” He’s had a few commercial barn friends come by to help. CFO also has advisors who answer his questions.

Artisanal farmers are audited according to the board’s on-farm food safety and animal care standards. They’re given guidebooks for both programs, which Country Plaid Farm’s Korcheski refers to as her “chicken bibles”. “They force you to uphold that quality,” she says, noting that the books cover issues like stocking density and humidity control.

And producers say the audits themselves are great learning experiences. Sideroad Farm has been audited two times thus far. “To be honest, our experience with CFO has been great,” Patrick says. “The auditing process is both thorough and constructive. In my opinion there’s really a focus on making you a better farmer.”

To further help growers, CFO offers an online portal with a myriad of resources and tools. What’s more, now that the program is three years old the board is connecting new entrants with more experienced farmers for peer-to-peer learning. Those links are being established at annual meetings and through a Facebook page exclusively for participants to support each other. “The board is really committed to helping this group nurture their business,” Goodish says.

Plan of entry
One of the biggest challenges artisanal producers share is learning how to market their product. The Kitchens had already amassed an impressive client list from their vegetable business, which they leveraged for their chicken venture. Social media has also been huge. They use it to educate consumers about their product and how they treat their birds.

But before all that producers need to decide on their flock size. To help, the board sends reps to applicants’ farms to have frank discussions about the their business plans. “We really try to be realistic about how many chickens they can actually sell,” says Patricia Shanahan, who oversees the program.

The Kitchens decided on a scaled approach. They grew 1,500 birds in their first year, 2,400 the year after and now they’re up to 3,000. With a diverse mix of customers in Owen Sound, Collingwood and Toronto, they’ve had no issues selling product. They offer a meat delivery program and supply local restaurants. They’re even in the midst of building an on-farm store.

Where they really thrive is in farmers markets. That’s because as the local food trend grows customers are asking more questions about where their food comes from. A farmers market provides the perfect venue to interact directly with the public to educate them about their product. The couple even invite market goers to their farm to show how they care for their birds. “I think transparency is important,” Patrick says. “This is our passion so we’re more than happy to talk about it.”

Looking forward, the Kitchens are undecided about taking their broiler business to the next level. “Whether we use it as a stepping stone or sit tight with 3,000 birds we haven’t made a final decision,” Patrick says. “But this experience would be invaluable if we do go that route.”

Meanwhile, CFO expects the program to keep  expanding. It began accepting more applications in August and demand from smaller-scale farmers remains high. In addition, the organization is getting a lot of repeat growers as well. “People in the program are very pleased with their outcomes, markets and business brands,” Goodish reveals. “So they continue to grow year after year.”