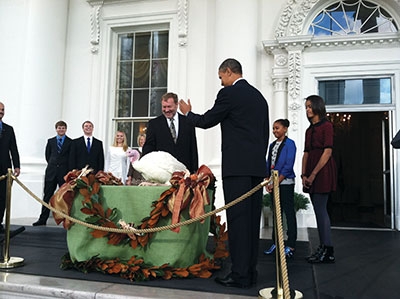 After her father pardons the 2011 candidate, Liberty, Sasha Obama is given a chance to pet the turkey with the help of former NTF Chairman, Rick Huisinga. of Minnesota Turkey Growers’ Association

It may have been the U.S. Thanksgiving, but there was a strong Canadian connection this year to a popular holiday tradition south of the border. As part of the run-up to annual holiday festivities, the President of the United States formally “pardons” a live turkey, typically presented to him by the National Turkey Federation (NTF) in a special ceremony at the White House.

CANADIAN CONNECTION
This year, NTF chairman John Burkel, a turkey producer from northwestern Minnesota, was in Washington, D.C., with a tom that stems from genetics provided by Kitchener, Ont.-based Hybrid Turkeys. And Peter Gruhl, Hybrid’s director of customer service and unofficial pardoned-turkey-handler, personally drove the bird in question from Burkel’s farm to the U.S. capital.

“Usually, the chairman of NTF grows turkeys for the event on one of their own farms,” said Burkel in an interview in early October. “This is a White House event. We contact them every year to offer the event up and they let us know how it is going to happen.”

A TRADITION TO KEEP
The pardon’s origins are said to date back to 1947 when American poultry farmers presented President Harry Truman with a turkey, but there are no official records linking the bird to a presidential pardon.

According to the White House, John F. Kennedy is said to have given the bird he received in 1963 a reprieve, but it wasn’t until 1989, when President George H. W. Bush made a comment about granting the turkey a presidential pardon, that the process became formalized (see page 52 for more information).

LONG-TERM PROJECT
Burkel, who is serving a one-year term as National Turkey Federation president, started his special turkey-growing project earlier this year with 80 Hybrid toms. When they were three weeks old, he selected 25 he thought might make suitable candidates for a trip to Washington, a group that was later narrowed to 13. Two make the final cut as possible pardoning-ceremony candidates.

“I take the ones that are personable and have a temperament that will let them be handled and set on a table when presented at the White House,” he explained. “We do a lot to get them socialized so they’ll be used to noise and flash photography, including playing a radio in their housing.”

TIME-HONOURED
The event usually takes place on the Tuesday before Thanksgiving, so Gruhl arrives in Washington with the birds the night before. The toms are taken to the Rose Garden (where the short ceremony takes place) in advance, so they can become familiar with the surroundings and afterwards, they are sent to their new home at Mount Vernon, the nearby George Washington estate.

A STORY FOR HYBRID TURKEYS
According to Gruhl, Hybrid Turkeys’ birds have been part of the pardoning event three times before, but that’s linked to the genetics the annual NTF president uses and not something the company has any control over.

“We don’t have any influence with whether a Hybrid bird gets chosen, it just happens to be what genetics they’re using,” he explained. “I have known John and (and his wife) Joni for a long time and it gives me great pride to stand up next to them at the White House. It highlights the strong relationships we have with our customers.

“When we look at the bigger picture, the pardoning of the Thanksgiving turkey is a great opportunity to promote the entire turkey industry,” he added. “It allows the public to remain connected to the farmers that are raising these birds that provide safe, healthy food for everyone.”

A GOOD REMINDER
For Burkel, a fourth-generation farmer who is also part of a producer-owned processing co-operative, the event is a great opportunity to kick off the holiday season with a feel-good event that highlights families and farmers.

“Thanksgiving is an event that isn’t tied to anything other than being thankful,” he said. “Turkey is the focal point of the dinner plate that day, it’s about family, and that’s a great tie-in to what we do, which is produce safe, wholesome food for families.”

PRESIDENTIAL TURKEY WEBSITE
The Minnesota Turkey Growers’ Association (MTGA) has developed a special Website where the public can learn how the presidential turkeys are raised. While the turkeys are being raised just like any other turkey flock in Minnesota, they are given increased interaction with people so that, if chosen, any of the birds will be prepared for their role at the White House ceremony.

To view the video, visit: http://minnesotaturkey.com/presidentialturkey/meet-the-flock/

The official “pardoning” of White House turkeys is an interesting White House tradition that has captured the imagination of the public in recent years. It is often stated that President Lincoln’s clemency to a turkey in an 1865 dispatch by White House reporter Noah Brooks was the origin for the pardoning ceremony. Brooks noted, “About a year before, a live turkey had been brought home for the Christmas dinner, but [Lincoln’s son Tad] interceded in behalf of its life. [Tad’s] plea was admitted and the turkey’s life spared.”

Recently, White House mythmakers have claimed that President Harry S. Truman began this amusing holiday tradition. However, the Truman Library & Museum disputes the notion that Truman was the first president to pardon the holiday bird.

Reports of turkeys as gifts to American presidents can be traced to the 1870s, when Rhode Island poultry dealer Horace Vose began sending well-fed birds to the White House. The First Families did not always feast upon Vose’s turkeys, but the yearly offering gained his farm widespread publicity and became a veritable institution at the White House. But in December 1913, Horace Vose died, ending an era.

By 1914, the opportunity to give a president a turkey was open to all comers, and poultry gifts were frequently touched with patriotism, partisanship, and glee. In 1921, an American Legion post furnished a crate of a gobbler from Mississippi to Washington, while a Harding Girls Club in Chicago outfitted a turkey as a flying ace, complete with goggles. The turkey gifts had become established as a national symbol of good cheer.

The focus on Harry Truman as the originator of the turkey pardon stems from his being the first president to receive a turkey from the poultry and egg board. From September to November 1947, announcements that the government was encouraging “poultryless Thursdays” grabbed national headlines. Homemakers, restaurant owners, and the poultry industry deflated the effort in time for Thanksgiving, but not before poultry growers had sent crates of live chickens — “Hens for Harry”— to the White House in protest. The turkey they presented to President Truman that December promoted the poultry industry and established an annual news niche that endures today.

In December 1948, Truman accepted two turkeys and remarked that they would “come in handy” for Christmas dinner. But there was clearly no plan for these birds to receive a presidential pardon. In 1963, the Washington Post used both “pardon” and “reprieve” in an article where President Kennedy said of a turkey, “Let’s keep him going.”

The formalities of pardoning a turkey gelled by 1989, when George H. W. Bush, with animal rights activists picketing nearby, quipped, ”this guy [has] been granted a presidential pardon as of right now.”