Meet the next generation of poultry nutritionist. 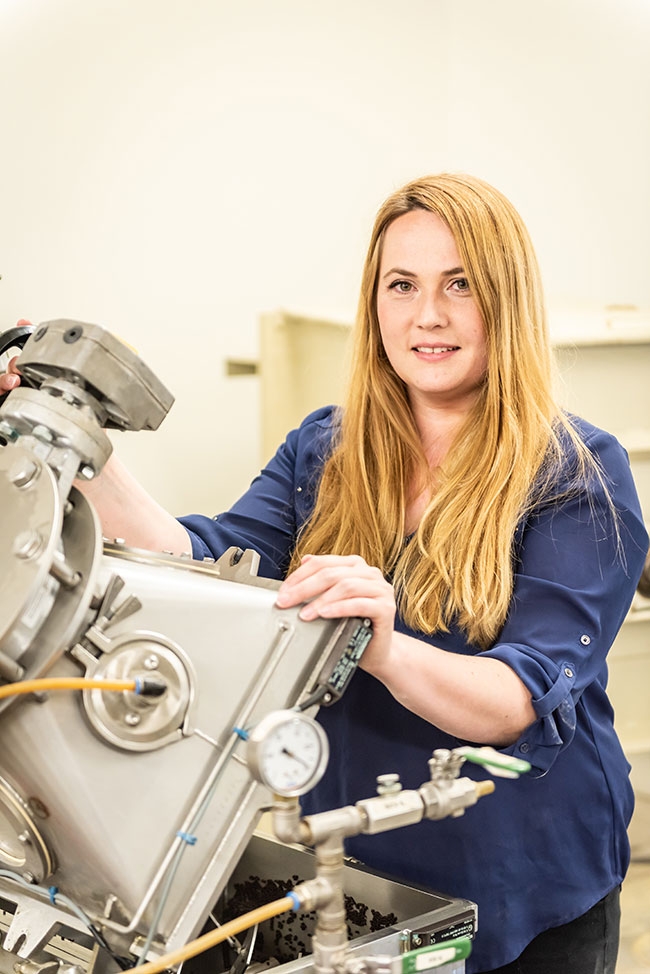 After decades as a highly respected researcher, teacher and mentor, monogastric nutritionist Derrick Anderson has developed an eye for talent. He sees something special in Dalhousie University researcher Stephanie Collins. “I think she’s one of the rising stars in Canadian poultry,” he says of the young scientist. “She’s the next generation of nutritionist.”

Anderson, a now retired adjunct professor who mentored Collins when she first joined Dalhousie, says her breadth of experience separates her from the pack. Instead of limiting her work to poultry, she conducts nutrition research for multiple monogastric species. She’s then able to take lessons she’s learned from one animal and apply them to another. “As soon as she started here she demonstrated an ability to move from one species to the next,” he says. “That’s a good thing for poultry.”

Collins’ road to the east coast began in the prairies. She was born in Nipawin, Sask., and raised in a small farming community nearby called White Fox. Eventually, her family moved to an acreage, where they did some backyard-level farming. That’s where her interest in agriculture grew.

She followed that passion to the University of Saskatchewan to study animal sciences. There, she earned a bachelor of science in agriculture and master’s degrees. In the midst of working on her PhD she sent a letter to Anderson, who’s work she highly respected, asking if he had any job openings at Dalhousie. Then, a year later while Collins was in Norway as a visiting researcher she received an intriguing proposal. Anderson offered her a postdoctoral position at the university’s Truro, N.S. campus working on Genome Atlantic’s Camelina Project. She gratefully accepted.

For that initiative, she evaluated feeding Camelina sativa meal to Atlantic salmon. It didn’t take long for Collins’ creativity to impress Anderson. For instance, one of the issues with Camelina is it contains a lot of mucilage. Collins developed a visual test where she’d dip a stick into the Camelina product to show how it adhered to the stick. She then showed how if treated with enzymes the stickiness disappeared. “She created a valuable tool to help appreciate the point she’s making,” Anderson says.

Aside from the Camelina Project, which ended in 2015, Collins has taught both undergraduate and graduate level courses at Dalhousie and given guest lectures at various institutions. She’s also been involved in research projects related to other feed ingredients, some of which she’s led. What’s more, results from several of the projects she’s collaborated on have been published in prestigious animal science journals.

Broadly speaking, Collins’ work has focused on evaluating feed ingredients and different feed preparation processes. Part of that involves processing feed ingredients so that diets either include or exclude certain components. She also makes innovative use of fermentation.

Much of her earlier research focused on using fish as a model to assess antinutrients in feed and their effect on animal growth. “Some antinutrients will impair growth either through a direct impact on the digestive track or maybe just through feed aversion,” she says. “So we looked at processing different feed ingredients to make more of a protein concentrate and reduce anything that might not be perfectly suited as a feed ingredient.”

In recent years, she’s focused more of her attention on poultry research. Specifically, her team has been studying using insects as feed ingredients. For this work, she’s drawn on her ability to apply discoveries from one monogastric species to another.

Stephanie Collins in her research lab at Dalhousie University.

For instance, a couple of years ago Collins studied feeding black solider flies to fish to assess the effect on growth and to determine the optimum inclusion level. While the fish grew well at lower dietary inclusion levels, they found the highest inclusion level (30 per cent of the diet) wasn’t ideal. While more study is needed, one possibility the researchers considered was that a component in the insects’ exoskeleton called chitin was restricting growth. However, Collins thought the substance could be useful in birds because it also has antimicrobial properties.

“So including it in a diet for broiler chickens could have a positive impact on microbiota and, hopefully, reduce reliance on traditional antimicrobials,” she says. With that thought in mind, her team recently launched a new trial looking at the inclusion of high chitin insects like crickets in chickens’ diets. Collins hopes to publish some of the data her team’s come up with over the next year.

Indeed, her multispecies expertise pays dividends. “If something isn’t commonly looked at in an animal you don’t always think about it,” she explains. “But because different animals have different focuses you’ll get an idea from one and apply it to another.”

The insect feed trials also underscore what she enjoys most about being a researcher. “In academia, you’re able to answer your questions and do something that makes an impact,” she says. “It’s nice to be able to provide solutions.”

To ensure her work is seeking answers to the right questions, Collins networks with producers to get insights into their research needs. That’s why she started attending meetings held by the Atlantic Poultry Research Institute. “It’s great to see their passion and commitment to animal welfare,” she says.

Collins’ work is ultimately driven by her desire to improve food security. Part of that involves reducing food waste. That’s why starting in 2016 she spent a year at Cape Breton University conducting postdoctoral research under the tutelage of award-winning sustainability researcher Beth Mason. “The whole idea was basically nothing is garbage,” she says of the experience. Collins worked on processing microalgae to release peptides, which could be used as a functional feed ingredient.

The dedication she’s displayed in her work is why Anderson believes the future is bright for his young mentee. He sees her eventually taking the reigns from some of the country’s most notable poultry nutritionists. “I think she’ll be relied on heavily to fill the role of someone like Hank Classen,” he says. “She’ll be relied upon heavily.”