The best of times? Most farmers say yes 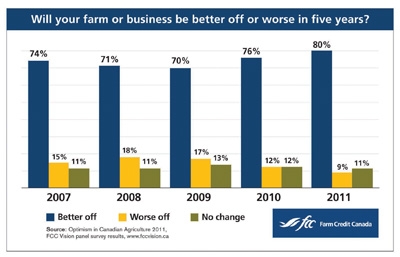 Optimism among Canadian farmers has never been higher than it is today, with all indicators reaching new highs, according to a Farm Credit Canada (FCC) Vision survey.

The optimism is reflected in farmers’ plans for the future with a majority planning to expand or diversify their operations in the next five years and 80 per cent saying they would recommend careers in agriculture to others.

Over the past five years the level of farmers’ optimism has been increasing. More farmers now say they are better off today than five years ago. In late 2011, when the survey was taken, more than three-quarters of all farmers surveyed (77 per cent) said that their farm or business is better off now than it was five years ago.

As good as things are now, farmers surveyed said better days lie ahead. Eight in 10 producers (80 per cent) expect to be better off five years from now than they are today. The number of producers who are optimistic has grown significantly since 2007, the first year the survey was published by FCC.

This increasing optimism is translating into plans for expansion and/or diversification. More than half (58 per cent) of producers are planning to expand and/or diversify their operations over the next five years, while just 15 per cent say they plan to reduce their operation or exit the industry. The increasing optimism is bubbling into recommendations that others consider a career in agriculture. Advocacy for agriculture is at a new high, according to the survey, with eight in 10 producers saying they recommend a career in an agriculture-related field, and seven in 10 saying they would recommend a career in primary production.

Although farmers said they would recommend farming as a career, they recognize just how hard it is to get into. Most producers stress that unless you have land or an operation being passed on to you, getting a start in farming is almost out of the picture. They told FCC “that due to increasing machinery costs and land prices, starting a farm from scratch is nearly impossible.”

Producers also said they want Canadian consumers to understand more about their industry, with an emphasis on the production of safe, quality food. The 10 words most frequently mentioned by producers were:  safe, food, quality, healthy, important, good, local, sustainable, product and Canadian.

While producers are optimistic, they recognize that major factors are beyond their control such as weather and unpredictable economic conditions. They are also concerned about increasing input and machinery costs and debt loads that could make the upcoming years tough if interest rates increase.

While farmers across Canada are increasingly optimistic, Saskatchewan producers lead the way with 82 per cent expressing optimism compared with 79 per cent nationwide.

Advocating careers in primary production is another way poultry producers show they are optimistic about the future.