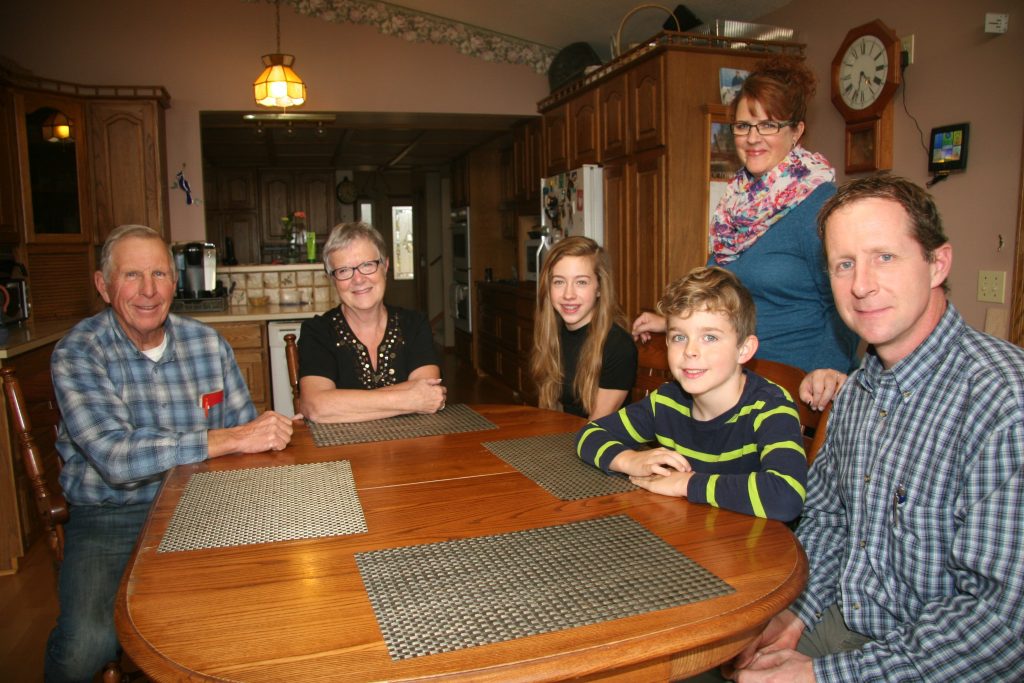 Don Sundgaard and family on the family farm in Standard, Alta. The Western Producer

“Give it some time, but ask questions and have the conversations,” says Sundgaard, who grew up on his family farm on the outskirts of Standard, which sits 90 km east of Calgary.

In 1971, Sundgaard took over the family farm after attending school and working in Calgary and Banff, Alta., for a number of years as an accountant. His father’s health had deteriorated and he could no longer manage the operational demands of the farm.

“We didn’t intend to come back as soon as we did but we received a call and we had to make a decision and it was my long-term intention to be on the farm, so we made the move.”

Over a number of years, Sundgaard took the family farm from a small operation that required off-farm jobs to a dual-site broiler and grain operation. “We transitioned over a period of time and increased production. We eventually built a few new barns on the existing site and then in 1990 we had the opportunity to buy a small grain farm. We started into the grain production and eventually built another barn on that property in 2006.”

When he took control of farm operations from his father in 1971, production was about 15,000 birds every 14 weeks. “Our production of broilers now is about 75,000 to 80,000 for an eight-day cycle and then we crop about 1,400 acres of wheat, barley, canola and sometimes edible peas,” Sundgaard says.

“Genetics have changed greatly, the mode of operation in the barn is now all computer controlled, where before it was all manual,” he says. “I remember on cold winter days, when the chicks came in, my father would practically sleep in the barn just to make sure the chicks were comfortable. Now we don’t do that, of course. Things are computer controlled, which is much better for the environment and for the bird.

“Mechanical loading has changed things a whole lot too,” he continues. “We used to carry the birds out, put them on wooden crates and the trucker had a tremendous job loading the crates on the flatbed. Processing was a whole lot different than what it is today as well. Everything is mechanized.”

The next generation
Along the way, Sundgaard and his wife, Val, raised two daughters and a son. As his son, Trent, made his way through high school he declared that he wanted to stay and work on the farm.

“Trent always wanted to come back to the farm and I always said that he could come back but there are a couple of things that, in my opinion, we needed to do first. We required him to go to school and do some post-secondary education because we knew he would need to know more than I did to make a successful business in the coming years, and we wanted him to work for someone else so that he can see what that is like.”

With Sundgaard’s encouragement, Trent ventured off the farm for a number of educational and worldly experiences. “Trent went to the Northern Alberta Institute of Technology (NAIT) and got his renewable resources degree and then worked on a trout farm in Denmark where they raised small fingerlings in the hatchery for fish. He also worked on a pig farm for a while and then went back to school in Saskatoon and earned an agriculture degree with a specialization in poultry. After that, he went to the Bahamas for two-and-a-half years where he worked with a company that had five farms and raised 250,000 birds every cycle. That was a good experience for him.”

Trent returned to the family farm in 2000, at which point the family began the process of succession.

“It has certainly been a process and we are not finished with it yet. At this point, the management of the farm is 100 per cent his. However, when anything major comes up, we still talk about it together – if we are going to purchase equipment, change a policy or things to do with insurance coverage, that type of macro decision making,” Sundgaard says. “Eventually, he and his wife will need to make all of the major decisions and we will step out of it and just be there if they need help.”

The Sundgaards have engaged a number of professionals along the way, including accountants and lawyers to draft legal documents. As well, both Don and Trent have actively looked for information and advice.

“Involvement with different professionals is helpful and even attending an open seminar can help to get the conversation started. There is also a lot of reading available. In the past five years there has been a lot of coverage on the issue that can help.”

Fair versus equal
One of Sundgaard’s biggest challenges throughout the process has been trying to ensure fairness to all of his children.

“We didn’t have the situation that some farmers are faced with, where they have two or three kids that want to come back to the farm. We only had the one child that wanted to come back to the farm so that simplified a few things,” he says. “But it was never our intention to just hand the farm over to our son. I guess to be fair and equal are two different things and so I read a lot about that.” He explains that to transfer the farm over and give equal shares to all the children makes it almost impossible for whomever is taking over the farm to make it viable and that it needs to be fair on an economic basis as well.

“For example, our land when we started into farming was about $500 an acre and today that same land is worth about $4,000 an acre. Quota has gone from a single digit number on a basis unit to 20 times that now. So, to start off with a farm paying market value for quota, market value for land, you have to have a few suitcases of money to make that work and to finance it all wouldn’t work either. So the financing side is a challenge for sure and that is where guidance from our accountant has helped.”

He adds that it is best to approach the succession issue with an understanding that it is not something that can be solved in a few meetings. “It takes time. It is a process that requires consistent communication and it will require both formal and informal conversations with everyone involved. But, it is better to have the conversations and talk about it than to wait until it becomes an issue or something that needs to get done in a hurry.”

Sundgaard also advocates for getting children involved in the farm operation throughout their childhood so that if one day they have the desire to take control, the learning curve will be lessened and they will have a good understanding of the farming lifestyle. “You need to instill the knowledge and lifestyle in your children, but then let them make the decision to come back to the farm on their own. The child coming back to the farm needs to have a passion and to want to do it in order to make it successful, otherwise it is just a drudgery farm. It is not a nine-to-five job. It is a lifestyle but also a business,” he says.