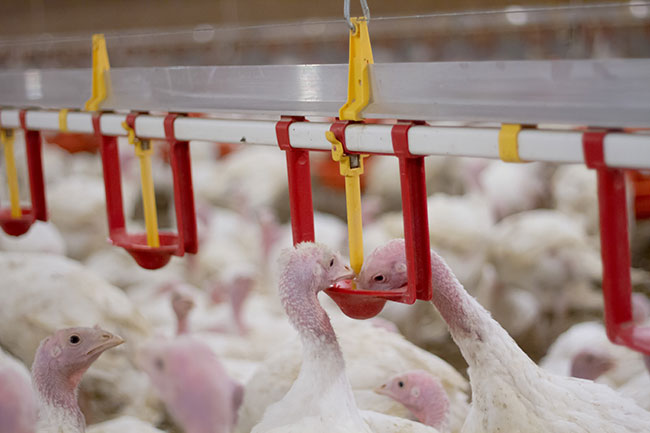 Water changes with the seasons, too!

Our water sources and delivery mechanisms are in a constant state of flux. Indeed, just because we can’t see the water doesn’t mean there’s nothing happening. In fact, because we don’t see the water much, there’s probably a lot more going on in the system than there should be.

Let’s start at the source. Wells are all unique. They can have a different dominant bacterial flora in the summer than they had in the winter. This can set a grower up for battling more bacteria coming into the barn during the warmer months than during the winter months.

As winter snows melt and spring rains fall, the water from these events can leach down through the soil and into the water source. This leaching takes minerals with it that are present in the soil, contaminants that may be sitting on the surface or hidden below and living organisms that are now thriving in the warm, wet soils above the water source.

A study on wells by the University of Arizona demonstrated that in the winter months only 7.5 per cent of the tested wells had E. coli present. Once the wet season moved through, the number of wells contaminated with E. coli jumped to 48 per cent.

Another change that can occur is in the pH. As the water leaches through leaves on the ground, it can cause a change in pH in the final destination – the well. Often, we think that a deep well won’t be affected by the changing of the seasons. We are finding that this can also be an unreliable assumption.

The U.S. Geological Survey found that when the summer months call for more water use (high pumping season), the water tends to be “newer”. This water is more likely to be contaminated with elements from the groundwater moving through vertical hydraulic gradients that are not normally a needed source during the low pumping season. This “younger” water can have a different make-up such as higher nitrate concentrations, for example.

Besides the changes that occur in the source water, there are a number of things that can occur inside the water lines in the barn and this is where even a municipal water source can face a challenge. No longer is the water moving underground and up into the barn in cold weather. Everywhere the water lines come above the frost line they are getting warmer and more susceptible to bacterial growth – and not just bacteria, but mold, algae, yeast and fungi are also waiting for their moment.

The living community in the water now has a head start on their growth even before they get inside the barn where it’s nice and warm. The warmer season also means the ventilation in the barn has increased. The fans are pulling more outside air into the barns and with that comes contaminants. These contaminants can land on the drinkers.

Once on the drinker, it is just a matter of time before whatever it was, be it a mold or fungi spore or bacteria, makes its way into the water line and sets up house.

We see a large increase in water problems when the fields next to a farm are tilled either for spring planting or for fall dormancy and all the dust from the farm gets pulled into the barn by the ventilation fans. Within a week or so of crop tilling next door, growth in the water line can begin to clog the drinkers.

The change in the season can bring unexpected and unwelcomed changes in the water system. This is a great time to do some mineral or bacteria testing on your source. It’s even a better time to review and reinforce your efforts to clean the water lines when the facilities are empty and decide on a water program while birds are in the barn.