New research a ray of light for green-powered poultry barns. 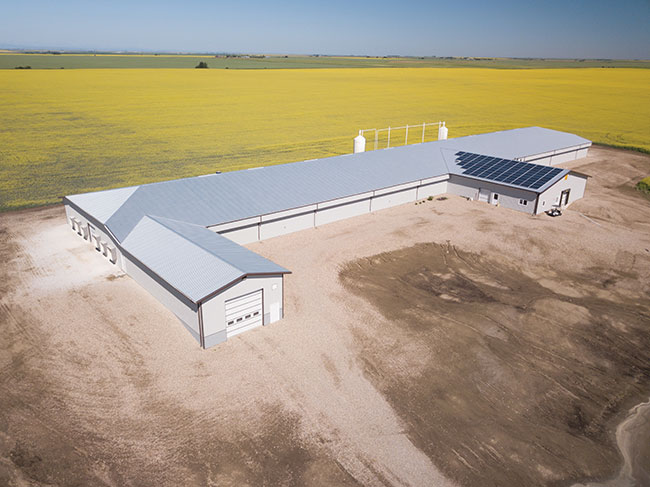 “The role of housing in terms of overall energy consumption in cradle-to-farm-gate egg production is quite small,” says Pelletier, an assistant professor at the University of British Columbia and NSERC/Egg Farmers of Canada Industrial Research Chair in Sustainability. “But with barns we have many technological advantages that can help to achieve substantial environmental savings.”

Pelletier points to the results of a recent study he led on the well-known net zero layer barn in the hamlet of Brant, Alta., as a case in point. Built by a Hutterite colony in 2016 with $250,000 in provincial and federal funding, the showcase barn was billed as the first electrically net zero layer barn and egg cooling facility in Canada.

Net zero refers to achieving an overall balance between emissions produced and emissions taken out of the atmosphere in any activity or process.

Pelletier and his UBC-based Food Systems PRISM Lab were tapped in 2018 to do a life cycle assessment of the barn using nine different categories of environmental impacts. The researchers utlized them to both measure and compare, among other things, the barn’s net-zero energy (or NZE) performance per tonne of eggs to an adjoining conventional pullet barn over a 30-year period.

New research findings
The results of the study, which were formally defended in a thesis by Pelletier graduate student Yang Li in April, put the anticipated environmental payback time – when the barn is expected to begin delivering net benefits compared to the conventional barn – at just over five years for greenhouse gas emissions and nearly eight years for cumulative energy use.

Pelletier credits the NZE barn’s hyper-insulated design, which he says provides “a highly efficient thermal envelope,” together with the use of energy-saving technologies like a heat recovery ventilator, a high-efficiency egg-cooling equipment, LED lighting and a hydronic heating system that radiates heat from warm water heated by a natural gas boiler for helping to reduce energy consumption.

But he also lauds the performance of the NZE barn’s 25-kWh, grid-connected solar panel power array, which, according to the latest figures from Egg Farmers of Alberta, is generating 29,000 kWh annually.

That is nearly 5,000 kWh more than total consumption of the layer barn and common areas (including an office and manure storage area) and only 2,000 kWh shy of also covering the electricity needs of the Brant farm’s pullet barn and egg cooler.

In terms of direct energy use, Pelletier’s study found the NZE barn’s consumption to be 83 per cent lower per ton of eggs produced than the conventional barn and 74 per cent lower over the entire life cycle.

It also helps to reduce the Brant farm’s overall carbon footprint by 12 per cent and electrical energy use by 30 per cent. “That more than offsets the higher environmental impacts from making and integrating all the materials needed to build the barn,” Pelletier says.

Many factors come into play when assessing potential environmental payback of an NZE barn – everything from regional climate to affordability and capacity. But Pelletier says the growing availability of improved technologies at a lower cost together with increased consumer demand and producer desire for enhanced environmental stewardship in industrial farming is fuelling interest in solar powered and other green-energy initiatives on poultry farms across Canada.

“It all depends on where you are and what you’re doing,” Pelletier says. “But the bottom line is that the salience of sustainability as a business interest has changed.”

Officially opened with great fanfare in early October, the farm consists of four barns (one for starter pullets, one free-run and two free-range layer barns), three of which are lined with rooftop solar panels.

The panels provide more than enough electricity to run the high efficiency motors, lighting and ventilation systems in all four barns, with excess power sent to a neighbouring Burnbrae farm.

The off-grid, electricity-independent farm is also equipped with batteries in which energy can be stored for overnight use or cloudy days when there is limited sunlight. It also sports a backup generator to ensure power for the protection and safety of Burnbrae’s birds.

Billed as the largest solar-powered egg farm in Canada, the facility has made Burnbrae a finalist in the Environmental Leadership category for the pandemic-postponed 2020 London Chamber of Commerce Business Achievement Awards, the largest annual event of its kind in Canada.

“This farm is such a milestone for us,” says Margaret Hudson, president and fourth-generation owner of her family’s farming business, which is one of Canada’s biggest egg producers. “We’re learning so much from the process and we’ll continue to innovate our operations for future sustainability projects.”

She adds that the farm is both the fruit and continuation of the decade-long efforts of a green-minded group of expert volunteers dubbed the Green Team. The group works to lower the company’s carbon footprint by identifying and promoting projects that decrease the use of energy for production, processing and grading, as well as water usage and waste.

The company’s waste diversion and composting initiatives have notably led to a 20-per cent reduction in Burnbrae’s GHG emissions in recent years, a mark that will be further lowered with the new solar-powered facility.

Interest heating up
Though projects on the scale of Burnbrae’s new farm remain rare in Canada, American commercial solar design and installation expert Keith Freeman says interest stateside in solar photovoltaic (PV) technology – the conversion of sunlight into direct current electricity through the use of semiconductors embedded in solar panels – is quickly heating up as technology and efficiency improve and public awareness and desire for sustainable energy sources increases.

“When I started in this business in the early 1980s the only solar power people saw or heard about was on the space shuttle,” says Freeman, a senior partner in VerdeSol, a South Carolina-based firm that designs and builds solar PV projects for industrial, commercial and agricultural clients.

According to Freeman, whose clients have included Ted Turner, the Westin Utilities Commission, solar PV technology has taken off in the U.S. since the mid 2000s, when Chinese companies began flooding the market with low-priced, high-quality systems and panels.

Dollars and sense
For his part, Ontario egg and pullet producer Ian McKillop, who owns and operates Argyle Farms with his brother Alan in the municipality of Dutton, says the decision to install nearly 300 solar panels on the south side of the roof on their new pullet barn in 2017 was a question of dollars and sense.

“It was an excellent use of existing infrastructure,” says McKillop, who also produces sheep, cattle and commercial crops on some 1,400 acres of farmland. “We did not need to take any field out of production, the panels face away from our neighbours and it’s not intrusive on the landscape like wind turbines.”

He says their 90-kW net metering solar energy system produces some 131,000 kW per year, which supplies roughly 80 per cent of the electricity needed to power his family’s home, two of their five barns (a conventional layer barn and the new pullet barn) and both grain dryers and fans for grain bins.

Under a provincial program, electricity they generate flows into the grid and they are only charged a net amount based on the power they use.

McKillop figures the surplus electricity they upload to the grid during the sunny summer season less the energy they need to run their grain dryer in the grey fall and winter months results in an annual savings of about $18,500 a year.

“The length of our return on investment will all depend on hydro rates,” he says. “Since they’re not likely to go down it’ll likely be a period of eight to 10 years.”

McKillop says he hasn’t tried to make any marketing hay by adding solar power to his family’s farm.

“I guess we could promote ourselves as being more green,” he says. “But the truth is that, as farmers, we’re always looking for sensible ways to be good stewards of the environment. This was one way we could do that.”