After a prolonged five-year gestation, the new poultry processing plant in Clair, N.B., opens its doors 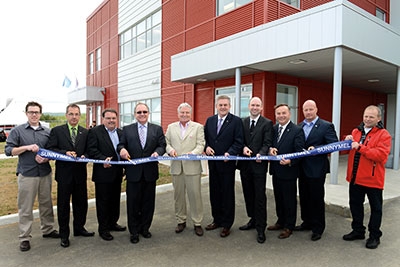 The newly opened Sunnymel plant, which cost nearly $55 million, has already experienced its fair share of difficulties during the five-year process. The plant will have a weekly slaughter capacity of 450,000 chickens, processed by around 200 workers at an hourly rate of 12,000 birds – and its products will be distributed by Sunnymel across the Maritimes and other Canadian markets.

The plant began start-up operations in November 2012, under federal jurisdiction and the supervision of the Canadian Food Inspection Agency, as well as subject to the application of the Food Safety Enhancement Program (FSEP) and Hazard Analysis Critical Control Point (HACCP) protocols.

Sunnymel is a 50/50 partnership of Groupe Westco, a New Brunswick company headquartered in Saint-François-de-Madawaska, N.B., and Olymel, a leader in Canada for the processing and distribution of pork and poultry products. Even the name, Sunnymel, is a collaboration between the two companies – the name combines Sunny Glen, a brand name from Groupe Westco’s egg division, and Olymel.

Quebec-based Olymel employs nearly 10,000 people at its facilities in Quebec, Ontario, New Brunswick, Saskatchewan and Alberta, and exports half of its production to the United States, Australia, Japan and 60 other countries. In 2012, its sales were over $2.3 billion based on a slaughtering capacity of 160,000 hogs and 1.7 million birds weekly.

Sunnymel boasts that its new plant uses “next generation equipment and manufacturing processes,” with processing efficiency unique in the New Brunswick food processing industry, as well as “the most modern facilities, in order to meet the highest environmental standards, especially as regards wastewater treatment.”

A repayable loan from the federal government’s Business Development Program enabled Sunnymel to take advantage of the design and construction of automated systems in order to improve its
productivity, said Claude Chapdelaine, director of Sunnymel’s slaughterhouse and cutting facility.

The seeds that germinated into Sunnymel were planted in the 1980s and ’90s, after the only other poultry processing plant in New Brunswick, in Sussex, shut down. Many southern New Brunswick poultry farmers chose to retire, rather than truck their chickens to over 400 km to Nadeau Poultry in St. François. Following that, northern poultry farmers began buying up their quota, so chicken production became even more concentrated around St. François in the Madawaska. They also invested millions of dollars in new poultry industry infrastructure, hatcheries and trucking.

The principal partners in Westco, however, believed they were exposed to an undue business risk, as they had only one processor customer, Nadeau Poultry. They feared that if Ontario-based Maple Lodge Farms Ltd. (who owned Nadeau) eventually closed the plant, their local investments would be in jeopardy.

“It was also the belief of our shareholders that we needed to be in all aspects of our chicken production to serve fully our customers in order to meet what the market wants. So, they offered to buy or invest in shares in the Nadeau plant in January 2007, but they could not reach agreement with Nadeau’s owners.”

Therefore, in March 2007, Westco proposed a joint venture with Olymel L.P., Nadeau’s main competitor in Quebec and the eastern provinces, to either buy the Nadeau plant or build a new processing facility nearby. In August of that same year Westco told Maple Lodge that if it was not willing to sell the Nadeau plant, Westco would begin building its own processing plant in partnership with Olymel, and during construction, would shift all its chicken for processing to Olymel in Quebec until the new plant was completed.

However, negotiations for the sale of the Nadeau plant failed. So, in January 2008, Westco notified Nadeau Poultry Farms Ltd. that it would stop supplying chickens, effective July 20, 2008.

Subsequently, Nadeau saw 80 per cent of its previous chicken supply head to Quebec as Westco partners held 51 per cent of the New Brunswick chicken production quota and their producer allies a further 29 per cent.

Nadeau responded in 2008 by seeking leave from the federal Competition Tribunal to apply for an order under Section 75 of the Competition Act, alleging a “refusal to deal” infraction by Groupe Westco under the legislation.

That application, if successful, would have compelled Groupe Westco to continue selling all of its live chickens to Nadeau.

In 2008, Nadeau also filed a complaint with the marketing board, the Chicken Farmers of New Brunswick (CFNB), insisting that the CFNB should create a guaranteed supply system that would require Westco to supply 50 per cent of its production quota of live chickens, to Nadeau’s plant.

The CFNB dismissed the complaint and the New Brunswick Farm Products Commission and the provincial Court of Appeal both approved the dismissal.

Nadeau had employed more than 350 at its peak, but in late August 2009, it announced it would have to lay off 175 workers if it could not get Groupe Westco birds. The Liberal provincial government reacted with a ministerial order in January 2010 designating Nadeau as the only federally inspected plant for processing New Brunswick-produced chickens, in order to stop Westco from shipping its poultry to Quebec while its new joint-venture plant with Olymel was under construction.

The court eventually struck down the ministerial order, as New Brunswick had never claimed the power to regulate processing, a power it could have had under the federal-provincial agreement on supply management.

Recently, Nadeau proposed a New Brunswick Chicken Marketing Agency that would deal solely with the marketing of broiler chickens past the farm gate, while allocating live chicken supply to processors inside and outside of the province. The Progressive Conservative government (which defeated the Liberals in September 2010) rejected the proposal.

The current government also rejected Nadeau’s request to review the CFNB’s 2005 removal of the cap on the level of quota ownership. Nadeau argued the cap removal allowed Westco producers to concentrate too much quota in their hands. The provincial government countered with a number of legal decisions, by various courts and the Federal Competition Tribunal that, under existing regulations, Groupe Westco could legally build its own processing plants while shipping its chickens to Quebec in the interim.

Earlier this year, Thomas Soucy declared, “It is high time to recognize that there will be competition in chicken processing in the Maritimes. Nadeau and Maple Lodge can no longer control the processing of chickens in
Eastern Canada.”

At Sunnymel’s official opening on May 17, Soucy stated, “This plant represents five years of solid effort and hard work to bring our products from poultry producers to market. It is a dream we saw on paper for five years that is now real and provides employment to some 200 people and creates many economic benefits for suppliers and services in
the region.”

In September 2009, the Sunnymel joint-venture partners signed a labour agreement with the United Food and Commercial Workers Local 1288, whose president, Jean Guimond, pledged the union would do everything it could to ensure that the Nadeau workers who lost their jobs would be hired by Sunnymel.

Soucy saw Sunnymel as a guarantee that producers like Westco could become a part of the value chain. “This is a great day for the poultry industry in New Brunswick.”

Olymel CEO Rejean Nadeau added, “Olymel’s presence in New Brunswick, through our partnership with Westco, one of the most dynamic poultry producers in the country, is a success factor. In the Madawaska region we have found a great home, a committed, dedicated work force, quality products and an undeniable desire for development.”

New Brunswick Premier David Alward viewed completion of the Sunnymel plant as an “achievement fully in line with our plan to create jobs and grow the economy by working with innovative partners like Westco and Olymel.”

Federal Aboriginal Affairs and Northern Development Minister and Madawaska-Restigouche MP Bernard Valcourt observed: “Our government is committed to creating jobs, growth and long-term prosperity in our communities across Canada. That is why we are proud to support the upgrade to the Sunnymel facility. These investments will help the company to become more efficient, productive, which, will in turn contribute to the economic growth of this region.”