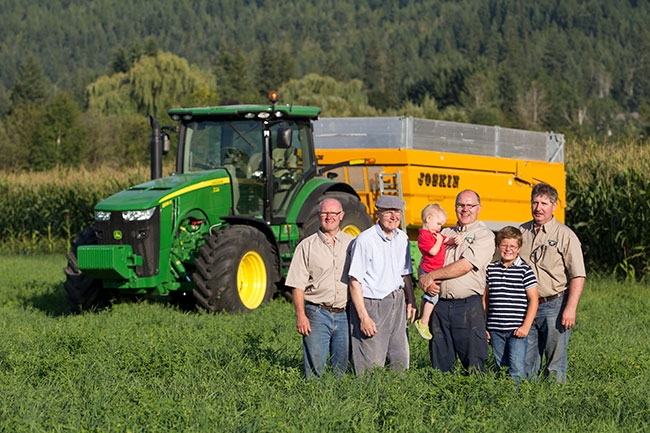 The arduous review process is over and the award has now been bestowed. Of the various operations nominated for the 2016 Canadian Poultry Sustainability Award, Farmcrest Foods Ltd. (Farmcrest) is the winner.

The enterprise was started in 1999 and is owned by Richard Bell and his brother-in-law Alan Bird, whose families both originate from Ireland and came to Canada looking for new opportunities. In addition to Richard and Alan, members of three generations of the families currently help out on the farm, including Richard’s father Cecil (a retired farmer), brother Henry and sons Henry Jr. and Jack.

The operation includes: a hatchery and poultry barns (in addition to growing their own birds Farmcrest also contracts 16 new entrant growers to supply chicken to their processing plant); feed mill; processing plant; rendering plant (renderings are not used on the farm but sold for animal feed); enclosed mechanical composting for bird mortality, and crop production (200 acres of owned land and 400 acres of leased land farmed with potatoes, sunflowers and soybeans). Farmcrest also has its own poultry retail store. In total, the operation employs 45 people.

The farm itself is situated on soils ranging from clay and loamy clay to sandy loam with some peat areas in a relatively flat river bottom area near Salmon Arm, B.C.

“It is also very close to Shuswap Lake,” Bell explains. “We therefore need to be very careful with the amount and type of nutrients applied to this well-drained area to prevent runoff.”

Farmcrest’s regular nutrient management practices include using a concrete pad (contained to prevent runoff) for manure storage. There is also virtually no runoff of nutrients from the fields (and little odour) as manure is worked in with a disc or ploughed under immediately after application.

“We only apply the manure to the fields needing it for the seed that is being planted,” Bell notes. “Our soil health has improved steadily in the last five years since these measures were put in place.” No commercial fertilizers are used.

Farmcrest has an environmental farm plan and has used expert advice from a certified crop advisor since 2011. In 2013, Farmcrest also began a working relationship with Poultry Partners, a team of technicians, production specialists, veterinarians and nutritionists based in Airdrie, Alta., which offers a variety of agricultural industry services. The firm supported Farmcrest’s nomination for the sustainability award through a letter of recommendation – as did the British Columbia Chicken Marketing Board.

“They’ve done an excellent job farming intensively in a very ecologically-sensitive area,” Shawn Fairbairn, Poultry Partners general manager says. “They have committed to improve soil fertility, optimize production and most importantly, reduce chemical and pesticide use and virtually eliminate synthetic fertilizer to ensure the surrounding ecosystem remains undisturbed. There is on-going monitoring and testing of the manure, soil and crops to ensure their goals are being reached. The investment in new equipment to allow for less soil disturbance and odour when poultry manure is applied is one example of their forward-thinking.”

Fairbairn also notes that farm equipment is continuously upgraded at Farmcrest so that the most precise technology is used with the most fuel-efficient engines. “By growing about 85 per cent of all the feed ingredients their chickens consume, they have dramatically reduced the carbon footprint of their operation,” he adds.

Farmcrest also uses moisture and pH meters for soil testing to understand when conditions are optimal for manure application.

An overall goal to achieve air quality improvement (reductions in odour, ammonia and particulate matter inside and outside the barn) has been achieved by ensuring an optimal level of nitrogen is available to the birds. Ingredient and feed sampling are conducted on a regular basis to track this, and tests to track soil nitrogen levels are also completed annually. Because of all this monitoring and adjustment (not to mention an on-farm feed mill that makes immediate changes in the ration possible), Farmcrest has seen improvements in bird growth as well as air quality and soil improvement.

No irrigation is used at Farmcrest, and as much water as possible is conserved through the use of an ‘air chill’ system in the processing plant, nipple drinkers in the barns and a misting system for barn disinfection. Farmcrest has built 14 new poultry barns in the last five years, and Richard says their goal with each build is to be as energy efficient as possible. This includes the use of R60 insulation, LED lighting, high-efficiency electric motors and radiant tube heating.

Product differentiation
Farmcrest was the first in its region to grow grain corn and now non-GMO grain corn. This led to the operation breaking new ground on a national level by being the first poultry operation in Canada to market non-GMO chicken (verified through nongmoproject.org). Poultry Partners assisted with further development of products. “[Farmcrest] listened to their customers and have proactively responded to the demand that was there in their local market. This has been extremely good for their business and the long-term financial viability of their operation.”

Fairbairn describes the Bird and Bell families as having a “tangible passion” for poultry and farming. “We love working with clients that are ‘hands-on’ and engaged,” he notes. “And the folks at Farmcrest are extremely engaged. Their work ethic and commitment to the environment and their local community is easy to grasp when you spend time with them. They are big believers in continuous learning and improvement. There is on-going reinvestment in all aspects of their operation to allow for improved welfare, safety and production efficiency for the birds, workers and the food they produce.”

Team effort
The fact that the Farmcrest owners directly work alongside their employees every day has created, in Fairbairn’s view, a culture of hard work and high standards. “It is also unique to see three generations of family all working together towards a common goal,” he notes. “The youngest generation is actively involved in working and planning and will be well prepared to continue the legacy of this agri-business. The owners are always looking for new technologies and ideas. They literally travel the world to attend trade shows, farm tours and crop production events to ensure they are on the leading edge of agriculture. As a consulting group, we are extremely fortunate to have a client like Farmcrest.”

Bell says he feels honoured that Farmcrest has won the 2016 Canadian Poultry Sustainability Award. “It is very much a team effort,” he notes. “I wish to thank my staff and our team for their dedicated efforts each and every day.”

Visit farmcrestfoods.ca if you would like to read in more detail about the business.