Advancements in the carbon-neutral pursuit. 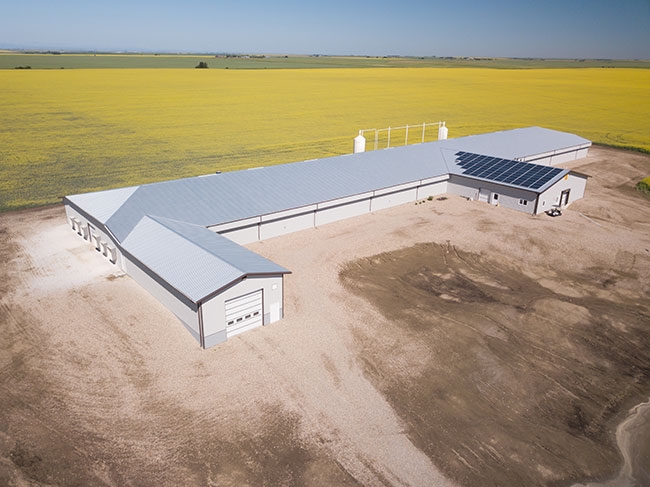 Sustainability is not a buzzword in farming. It’s a day-to-day reality. If you don’t sustain the soil and greater environment on a farm, you won’t have a future. And if you don’t efficiently use – and maybe re-use – energy, water and other resources, you won’t sustain your farm business financially either, again jeopardizing your future.

A number of ag-related sustainability initiatives are moving forward in Canada and around the world in all types of farming. Here, we look at two layer operations – one Canadian and one in the Netherlands – that have made great strides towards sustainability, especially with electricity generation.

The barn has a hydronic heating system, where heat radiates out from warm water heated up with a natural gas boiler and circulated through a set of tubes, in this case hung from the ceiling.

EFA industry development officer Jenna Griffin notes that the layer operation was designed to be electrically net-zero. At this point, it seems to have exceeded that goal. Annual electricity consumption of the layer barn is 24,815 kWh and the solar panels generate about 29,000 kWh.

In fact, that amount of solar power generation comes close to covering the total consumption of the layer barn, the egg-cooling area and the pullet barn (31,279 kWh). Pullet flock sizes in 2017 ranged from 13,600 to 14,000 birds. Natural gas consumption for all the buildings in 2017 was 714 gigajoules.

In terms of the barn’s other system, in 2016 there was uncertainty about whether the incoming airspeed would be sufficient to reach the centre of the barn. This could have been a potential issue in very cold weather, says Brant Colony egg production manager Darrel Mandel, when the rate of incoming airflow needs to be reduced to prevent fan freeze-up. However, he reports that air circulation is better than anticipated.

“We have found that restricting the shutter on the intake fan, when at low speed, helps to get better pressure and better flow to the centre,” he explains. “We did have to use a pressure washer twice during the winter to open up the drain in the unit – the drain itself didn’t freeze (it has a heat tape) but inside on the interior floor of the unit, a layer of ice formed which did not allow condensation to drain.”

Regarding the HRV unit, Mandel says the manufacturer recommends having it washed automatically every 48 to 72 hours. However, “with the winter we had at times, -30°C to -38°C for seven-to-10 days, we were forced to prevent that as it was too much of a risk to have it freeze up,” he says. “Maybe I’m wrong, but I feel that in really cold times like -30, the unit is almost too big. It only requires the exhaust fan to run at 76 per cent and that may be too low to keep the unit warm enough. But we did not have any wet litter on the scratch area during the cold spells as humidity was very low. I should mention that I keep in close contact with other free-run producers who do not have HRVs, and I always find that the humidity is quite a bit lower in our barn than theirs, which helps to keep the litter dryer in times when we are forced to ventilate at a minimum level.”

Mandel adds that next winter, they will likely prevent more heat loss from the layer barn by closing and insulating all the fans that are not in use during the winter months (right now, there is some air leakage through the shutters).

There are no concrete plans at this point to add more solar panels, but it could occur in the future. “We have a diversified farm, and it doesn’t make economical sense to just invest in this one project,” Mandel notes. “It would be more profitable to do solar power expansion on a larger scale.”

Overall, he says the efficiency technology that they have invested in has been expensive, but that it must be viewed in the big picture.

“We can’t just look at it from the point of saving energy,” Mandel explains. “There are other benefits such as better air for birds and employees, dryer litter, warmer incoming air for the birds, that have to be weighed in as parts of the return on investment. It’s kind of hard to measure the value of all of them at this point, and only time and experience will give more insight on the full benefits.”

Kipster layer barn
In late 2017, media outlets around the world eagerly picked up the story of Kipster, a new layer operation in the Netherlands that started up last September and claims to be producing carbon-neutral eggs.

The farm sells eggs from its 27,000 layers (white Dekalb from Hendrix Genetics) to a major European retailer called Lidl. The barn is an aviary system (NATURA Step from Big Dutchman) with two wings and a spacious covered courtyard in between, complete with small trees.

Part of the courtyard roof is clear glass and the rest is opaque solar panels. The total number of solar panels on the farm is almost 1,100, and beyond providing for the barn, the remaining electricity generated (60 per cent) is sold to the grid. No heating is used – only what Zanders calls a standard heat recovery system.

Also on the environmental sustainability front, outgoing air from the barn is filtered to reduce fine dust by over 95 per cent.

Big Dutchman reports that a tunnel system dries the manure up to a dry matter content of 80 per cent, allowing it to be pelletized and sold as fertilizer. In terms of animal welfare, the facility has achieved the highest rating possible from Dutch animal activist group Animals Awake.

Kipster egg prices are linked to feed prices and updated every six months. They are lower in cost than free-range and organic eggs in the Netherlands marketplace, and Zanders says he has no interest in trying to achieve organic certification, as some of the standards are not very sensible.

“We don’t want to have a lot of land for the chickens available if they don’t use it,” he explains, “and second, we don’t to want to be feeding our birds with organic cereals, because we as humans can eat that as well.”

Kipster’s hens receive a feed (made by Dutch firm Nijssen) that partly contains local bakery waste. Zanders says these residues replace all the cereals and maize that would normally be present in chicken feed. For protein, sunflower or rapeseed meal is added.

Zanders also confirms that his carbon-neutral egg claim is based on initial calculations by scientists at Wageningen University. He’s not sure if the scientists will do another set of calculations, but he and his colleagues will conduct their own at the end 2018.

Zanders says it was not hard to locate enough waste material from local bakeries, “because, on average, a huge bakery has about three-to-four per cent residues.”

In terms of whether there are ever any shortages of residues, he notes that it’s not possible for Kipster to have a shortage because its concept is about tailoring herd and flock sizes to the amount of food waste or marginal land available.

“In our vision, you have to feed the hens with residues, the cows and goats with grass, and so all the land where it’s possible for producing plant-based products is used to grow food for humans,” he says. “Marginal land is used for milk production and a little bit of meat in the form of the eventual slaughter of the dairy cattle.”

Carbon neutrality of eggs
It would be difficult for even a small percentage of the global industry to use human food residuals in chicken feed. What’s more, the carbon footprint of a typical Canadian layer barn is very high because of higher numbers of birds needing more heat, light, ventilation and other factors.

How does Zanders think the Kipster claim of carbon-neutral eggs affects the poultry industry worldwide? After all, many consumers are likely reading about the operation and wondering why the rest of the layer barns in the world can’t produce carbon-neutral eggs as well, holding other producers to unrealistic standards.

Zanders reiterates that, in terms of carbon footprint, feed is the most important factor.

“And yes, everybody can run their operation like Kipster does,” he notes. “Consequently, I think that we should have fewer animals. I think that in every country you can work with alternative/green electricity. If you say maybe there are not enough residues to feed all the world’s animals, then maybe that’s right, with a wrong conclusion. Then in that case, we don’t have too few residues, but too many animals.”

Egg Farmers of Canada was asked for its comments on Kipster. The organization states that while sustainability is a core value of the Canadian egg industry, it does not wish to comment on Kipster given that it has been operational for short period of time and there is limited information available.

Green with the wind
Using renewable and readily available resources is a hallmark of sustainability – and has been a standard operating procedure at Bayview Poultry Farms in Masstown, N.S., near the Bay of Fundy for over a decade.

The farm (about 14,000 hens and half as many pullets) is situated in quite a windy spot. Thus, 11 years ago the owners installed three 50-foot wind turbines that generate four KW apiece.

The technology has worked well for the Jennings family over the years, powering barn equipment – and on good wind days, allowing excess power to be added to the grid.

This use of renewable energy allows Bayview to market its eggs as eco-friendly under the Maritime Pride Eggs label.

In coming years, the Jennings have said they hope to grow feed crops, build their own feed mill, expand their egg quota and incorporate solar energy on the farm.