Dick and Gladys Ottens say it’s a balancing act between letting their children run the farm. 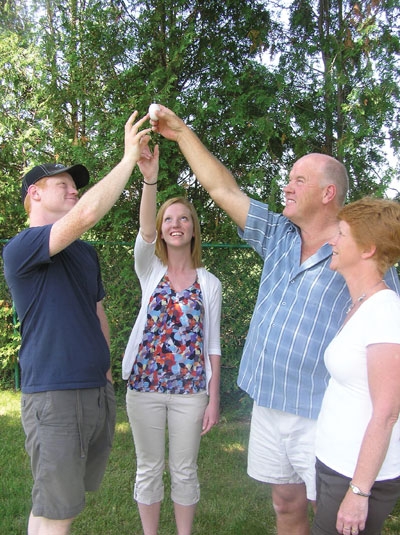 The Ottens are in transition: Parents Dick and Gladys are handing over the reins to son Mike and daughter Kelsey

When Canadian Poultry Magazine reached Dick and Gladys Ottens to ask if they would agree to be featured in its annual Who’s Who issue, they were waiting to board a ferry in British Columbia. Nothing particularly unusual about that except their home and farm is located thousands of kilometres to the east, just outside Petrolia, Ont.

The Ottens are in transition, or as it is framed in farming circles, they are in the midst of an intergenerational transfer. Two of their three children, Mike and Kelsey, are taking over the farm and now control the majority of the common shares in the incorporated enterprise. Meanwhile, their other child Lindsey has built a career as a midwife.

The transition of the ownership of the farm from one generation to the next “is a complicated process,” Dick said. “It’s hard to get into farming and it’s hard to get out.”

A good lawyer and a good accountant are necessities and are deeply involved in working through all the tax issues and through a maze of other legal and financial complexities.

“It has to be like an arm’s length deal even though it is within the family,” he said.

While the process isn’t simple, it isn’t overwhelming either. It’s a matter of dotting i’s and crossing t’s and ensuring the result is something that works for everyone.

This too is far from simple because there is no cookie-cutter, off-the-shelf procedure. Every farm is different, every situation is different, so every transfer is different. For that reason it is important to involve professionals with experience. They have seen the pitfalls and hazards and know how to avoid them. Because of their experience they can act as guides, making the trip as smooth and trouble-free as possible.

The intergenerational transfer wasn’t something that the Ottens had necessarily anticipated. “We never expected any of the children to take over the farm. But they are interested in it,” Gladys said.

Mike was working at the Canadian technology giant Research In Motion (RIM) in Kitchener-Waterloo and Kelsey has just finished her second year of studies at the University of Guelph, where she is studying genetics. Both were building lives that seemed to be leading them away from the farm. But when presented with the opportunity to take on the broiler-breeder and broiler farm, along with 200 acres of cropland, the brother and sister decided it was an opportunity that shouldn’t be passed over.

Having grown up on and been involved in the farm, both know the life and its challenges. But they also know that owning and operating a farm is very different from living and working on the farm as children.

With 19,000 hens in the breeder part of the enterprise, 20,000 broilers and the 200 acres in winter wheat and soybeans, it isn’t a small undertaking.

Kelsey said taking ownership of the farm “wasn’t in the original plan.” But it is “a good opportunity for me and it fits well with what I’m doing.”

Mike is married with two children and this is an opportunity that he didn’t want to pass up. It allows him to apply what he learned growing up on the farm and, with technology becoming an essential part of farming, the computer and technological skills he learned at school and at RIM.

But there is a lot more to learn, he said. “When you’re a kid you don’t pay attention to detail. Now we have to.”

Taking over a supply-managed farm also helped Mike and Kelsey make their decision.

“We can set up cash flows and know what to expect. If it wasn’t supply managed I would have to think about it,” Kelsey said.

While Dick and Gladys are moving aside, it’s not easy to let go. “We have to learn to be somewhat out of it,” Dick said. But 17 years of owning the farm and the years managing turkey and broiler farms in the Listowel, Ont., area taught them some lessons. “We learned some things to watch out for and we’re not going to sit back and let them happen,” Dick said.

On this point the children and the parents are in full agreement. “We’re not willing for them to let go,” said Mike.

Gladys pointed out that it is a balancing act between letting the new owners run the farm and the staying involved enough to provide guidance or help when asked. “It’s a fine line,” she said.

On the broiler breeder side of the operation, the deep involvement of the Ontario hatcheries will help the transition. Dick said people from the hatchery visit about 20 flocks a week, carry a lot of knowledge with them and are very valuable to the farmer.